You are here: HomenextHarpenden HistorynextTopics - from Archaeology to WartimenextChildhoodnextChildhood memories of HarpendennextOld Time Harpenden Shopping (just before the first World War) 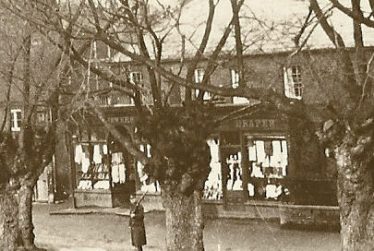 zoom
The famous "Jewers" in Rose Cottage, in the background of a 1915 postcard of "The Staffords" surrounding the regimental postman. Interesting garments are visible in the windows
LHS archives

Saturdays were always special days, for that was when we spent our pocket money.  This was only a penny a week, but was augmented by an agreement that we might fall heir to any farthings that emanated from Mother or Nanny’s purchases, and we had a plan to make the most of this financial deal.

On the nursery mantelpiece stood a Waifs and Strays collecting box which we always put well to the front when visitors came who might be of a generous disposition.  Some were and some weren’t – we watched them like hawks.

We had discovered how to open the slit at the bottom of the box, but we were very honest children and replaced any donation we might find with our farthings, of which we kept a store.  We’d discovered they weren’t a popular acceptance of our Saturday penny.

So although the waifs and stray didn’t lose by the deal, the money box was always heavy with farthings.

On Saturdays I always made for the little sweet shop in the High Street called “Jenny Austins”. It was particularly appealing as it had steps leading down to it, and a variety of chocolate bars, sugar mice and chocolate drops with white beads on.  Sometimes I saved up enough to buy some Turkish Delight.

Alison, who had more practical tastes, used to make her way to Church Green where, by Samson the fish shop, the Miss Warrals had a small toy shop where they sold little clockwork toys and small tortoises with waggley wire legs.

After we’d made our purchases, there always seemed shopping to be done to replenish our wardrobes.  My most vivid memory is being taken by Nanny to Oliver Jewers, a shop in High Street, to buy our combinations.  We hated combs., but there was slight compensation in the way the contents of the shop were arranged.  The combs. wrapped in buff coloured paper packets, according to their size, were piled on shelves, each secured by string in a most intriguing way.  One pull on the knot and it came undone with an explosive sound and all was revealed.  Having settled on the packets containing our sizes, the system went into reverse and the string replaced with the same fascinating “ping” which had attached it.

Sometimes Nanny bought some knickers from another shelf and we watched with interest while she made her choice, the discarded packets ending with the explosive sound of the replacement of the string.  A visit to Oliver Jewers almost made up for the indignity of wearing combs. when most of our friends wore vests.

After these rather dull purchases, Nanny sometimes took us across the road to West’s, the baker and confectioner, where she bought us miniature cottage loaves which we were allowed to have for tea, and spread as much butter on as we liked.

The shop next door was a chemist, Busby’s, where I imagine Nanny stocked up on our internal requirements.

No shopping in the village was complete without patronising Anscombe’s, the prestige drapers where we bought our socks, hair ribbons and anything in the haberdashery line.  The shop extended as the years went by and added a variety of things to their stock, including hats.  Eventually it built a furniture department, and became the emporium of Harpenden.

Sometimes we needed shoes and Nanny took us to Watsons, a rather superior shoe shop on the corner of the High Street.  It had a few very grand looking shoes arranged on stands in the window, but the inside was lined with shelves of shoe boxes.  There was even a little ladder to reach the top ones.  When a customer came and described the nature of her requirements the assistant went to the shelves and came back with so many boxes, she could hardly see over the tops.

When my turn came to be fitted I was always overcome with embarrassment as Nanny would say to the assistant in a penetrating whisper “Betty has such difficult feet” which resulted in the poor assistant fetching box after box of shoes.  Meantime I sat grumpily on a little stool, while with the aid of a shoe horn, she would try to find a pair that could be worn by a child with one foot bigger than the other.

It frequently happened that none could be found, and feeling very embarrassed we left Watsons with piles of empty shoe boxes on the floor and rows of discarded shoes lined in rows.

We patronised many other shops but there are too many to list.  So I shall just end with the memory with which I began – the buying of combinations at Oliver Jewers.