You are here: HomenextHarpenden HistorynextTopics - from Archaeology to WartimenextCharities, Health and WelfarenextHealthnextThe Children's Home at Harpenden - A report on progress 1915

The Children's Home at Harpenden - A report on progress 1915 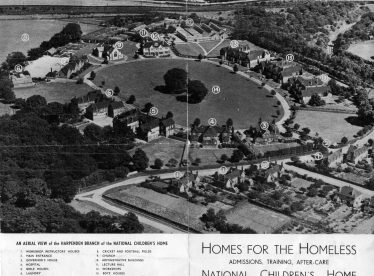 “Highways and Hedges” the organ of the National Children’s Home and Orphanage, contains the following report of progress (in 1915) at the Harpenden branch:-

At the close of the second year at Harpenden it is very gratifying to report a year of successful work.  Substantial progress has been made in various directions, and the family is now well established in its new and more spacious quarters, and under very different conditions from those which prevailed at Bonner Road.

A healthy and picturesque situation

With heartfelt gratitude and praise we acknowledge the goodness of God during these pioneer days of settling down to the new order of things and we can, with confidence, anticipate in the coming years great blessing and helpfulness to that stream of young life which finds admission to the Home.  In a branch so healthily and picturesquely situated with its organisation and arrangements quite suitable for the work in hand, children will have a fine chance to develop physically, mentally, morally and spiritually thus becoming well equipped for the time when they leave us to take situations either in this country or across the sea, in Canada.

When the chapel, hospital, and the remaining houses are built, especially a working boys’ house the branch will thus have a fuller opportunity of attaining greater general efficiency.

One of our girls who was very delicate when she came to us, after a short illness passed away, the first of our children to “enter into rest”.

Impact of the Great War

In our own land there are few families that have not been touched either directly or indirectly by the terrible war forced upon our nation and her allies, and here at Harpenden we have directly, in a variety of ways, felt its influence.  Our older boys have not been slow to respond to their country’s call to do their patriotic duty.  The eight mentioned previously went direct from the branch where they were apprenticed in our industrial departments, and the first of them to go died of wounds in France.  The enlistment of these senior boys has added its difficulty to the management of the departments where they were trained, but we have only shared in the general difficulty experienced by outside employers of labour.  Opportunity will be given to these senior boys to return and complete their apprenticeship if they so choose when the war is over.

The completion of the carpenters’, engineers’, bookmakers’ and tailors shops has added a fine set of premises in which to carry on the necessary training and work.  The industrial departments of the branch are now complete, and with such excellent buildings the training will have full opportunity of attaining its highest efficiency.  In all the departments already organised for the training of our elder children, good and useful work has been done.  The school is doing valuable work for the younger children, but the headmaster has experienced difficulty owing to our assistant master joining the colours, and our inability to fill the vacancy without long delay.

The health of the children has been excellent and especially so during a very trying winter.  Dealing with the sick children would have been easier if the branch had its hospital, but as it is, the nursing has been done in the houses, and this is not an easy matter with twenty five other children in the house.  With the hearty co-operation of medical office, nursing sister, and sisters, the difficulty has been met, and the general good health is due to this combination of effort.

The following cases are illustrative of the work done at the branch for the children of need:-

Girl of 11. One of six orphan children living with a married sister who cannot afford to keep them.
Boy of 12.  Father, of bad character, Mother left with seven children.
Girl of 12.  Father dead. Mother left with six children under fourteen.
Boy of 14.  Father and mother died of consumption.  Boy needs care and training.
Girl of 13.  Mother in prison for neglecting child.
Boys of 7 and 10.  Father died four years ago leaving widow with four boys.  Mother cannot get work as she is suffering with lupus in the face.

These children stay with us on an average five years, being schooled, disciplined, and trained to become good men and women, useful citizens of our country and Empire, doing their duty and exerting a wholesome influence in the circles in which they are called to labour and to serve.  The large percentage of these doing well is the best tribute to the work done for them, and from many walks of life letters come to us from old girls and boys referring with affection and gratitude to the Home that has done so much for them, and telling of their success, in most cases entirely due to the benefits the Home afforded.

One of the highest tributes came from one of our old girls who has, during the year, completed her BSc London University, and who is now holding a good position in a large secondary school.

The formation of a Scout and Training Corps at the end of the year added a new and most interesting feature to the work, and the boys are eager to enjoy the privilege of membership.  There has not been time to do much training yet, but it will undoubtedly become a most useful adjunct to the work, instilling into the boys those high principles of fidelity to God, obedience and loyalty.

The recreative side of the work, both for girls and boys has been carefully organised so that the leisure hours may be employed happily, and at the same time affording the opportunity to learn many lessons such as can be learnt in the realms of sport.

But with all the varied ways in which the girls and boys are being trained, the greatest importance is attached to the chapel services, the classes for biblical and spiritual instruction, the morning prayers in the chapel, and the family prayers at home.  All these have played the most important part of the moulding of the character and life of the children in the past days, and to these we look still to create that atmosphere in which the higher life may have the fullest opportunity to develop its best growth.  It is a pleasure to pay tribute to the loyalty, devotion, and earnest painstaking effort of all those who, either as sisters or members of the training staff in the different departments, are rendering service on behalf of the children for whom it is our high privilege and responsibility to care.