You are here: HomenextHarpenden HistorynextTopics - from Archaeology to WartimenextChildhoodnextSchoolsnextAn Appeal to the Ratepayers of Harpenden

An Appeal to the Ratepayers of Harpenden 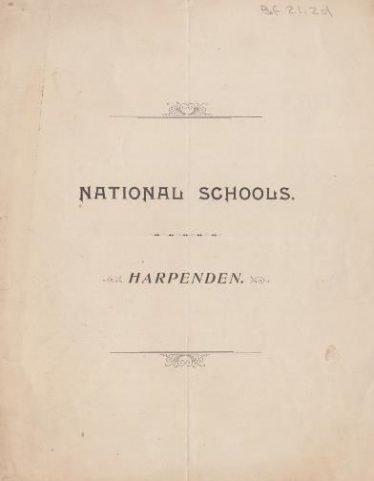 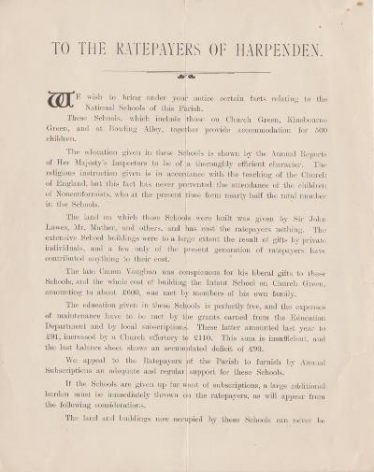 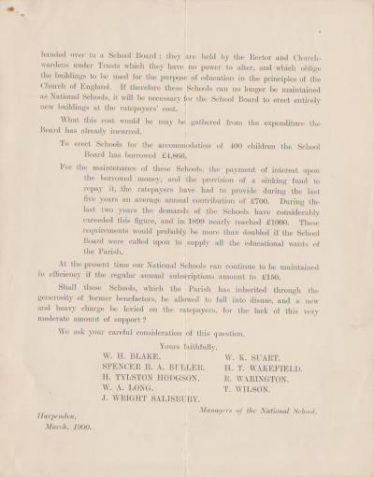 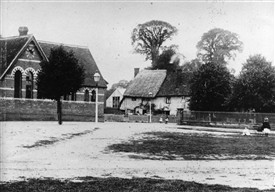 zoom
: St Nicholas School, opened 1865 on the site of two cottages: the cottages to the right were church cottages, not part of the school
LHS archives 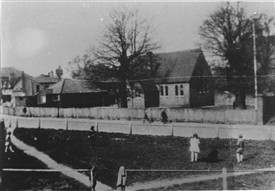 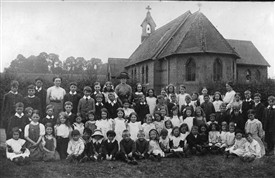 We wish to bring under your notice certain facts relating to the National Schools of this Parish.

These Schools, which include those on Church Green, Kinsbourne Green and at Bowlng Alley, together provide accommodation for 500 children.

The education given in these Schools is shown by the Annual Reports of Her Majesty’s Inspectors to be of a thoroughly efficient character. The religious instruction given is in accordance with the teaching of the Church of England, but this fact has never prevented the attendance of the children of Nonconformists, who at the present time form nearly half the total number in the Schools.

The land on which these Schools were built was given by Sir John Lawes, Mr Mather, and others, and has cost the ratepayers nothing. The extensive School buildings were to a large extent the result of gifts by private individuals, and a few only of the present generation of ratepayers have contributed anything to their cost.

The late Canon Vaughan was conspicuous for his liberal gifts to these Schools, and the whole cost of building the Infant School on Church Green, amounting to about £600, was met by members of his own family.

The education given in these Schools is perfectly free, and the expenses of maintenance have to be met by the grants earned from the Education Department and by local subscriptions. These latter amounted last year to £91, increased by a Church offertory to £110. This sum is insufficient, and the last balance sheet shows an accumulated deficit of £93.

We appeal to the Ratepayers of the Parish to furnish by Annual Subscriptions an adequate and regular support for these Schools.

If the Schools are given up for want of subscriptions, a large additional burden must be immediately thrown on the ratepayers, as will appear from the following considerations.

The land and buildings now occupied by these Schools can never be handed over to a School Board: they are held by the Rector and Churchwardens under Trusts which they have no power to alter, and which oblige the buildings to be used for the purpose of education in the principles of the Church of England. If therefore these Schools can no longer be maintained as National Schools, it will be necessary for the School Board to erect entirely new buildings at the ratepayers’ cost.

What this cost would be may be gathered from the expenditure the board has already incurred.

To erect Schools for the accommodation of 400 children the School Board has borrowed £4,866.

For the maintenance of these Schools, the payment of interest upon the borrowed money, and the provision of a sinking fund to repay it, the ratepayers have had to provide during the last five years an average annual contribution of £700. During the last two years the demands of the Schools have considerably exceeded this figure, and in 1899 nearly reached £1000. These requirements would probably be more than doubled if the School Board were called upon to supply all the educational wants of the parish.

At the present time our National Schools can continue to be maintained in efficiency if the regular annual subscriptions amount to £150.

Shall these Schools, which the Parish has inherited through the generosity of former benefactors, be allowed to fall into disuse, and a new and heavy charge be levied on the ratepayers, for the lack of this very moderate amount of support?

We ask your careful consideration of this question.

Managers of the National School

The National School – short for the National Society for promoting the Education of the Poor in the Principles of the Established Church – first opened as a mixed school in 1858, in a pair of thatched cottages. These were subsequently demolished and a new school, built on the same site, was opened in 1865. It became St Nicholas’ Church of England Primary School.  Further new Anglican Schools were built to cope with the increasing numbers of children attending the National School. St Mary’s National (mixed) School at Kinsbourne Green was built as a combined church and school. It opened in 1869 with 72 pupils who therefore no longer had to travel to and from the centre of Harpenden every day for their education at the National School. Bowling Alley (mixed) Infants’ School, opposite the Rose and Crown Public House in Southdown Road, opened in 1874 with 70 pupils. This later became St John’s School and remained in use until 1964.

Transcript of a document in the LHS Archives: