as reported in Harpenden Parish Magazine, August and September 1869 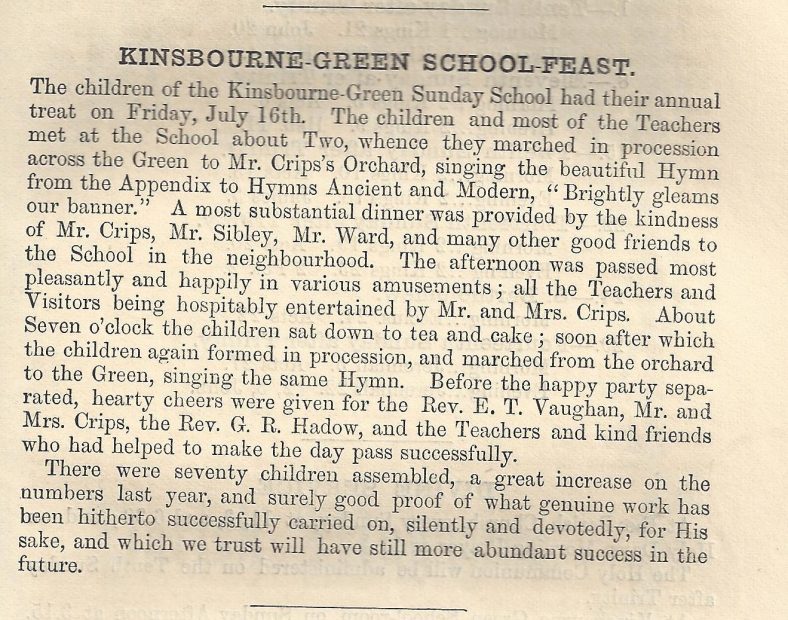 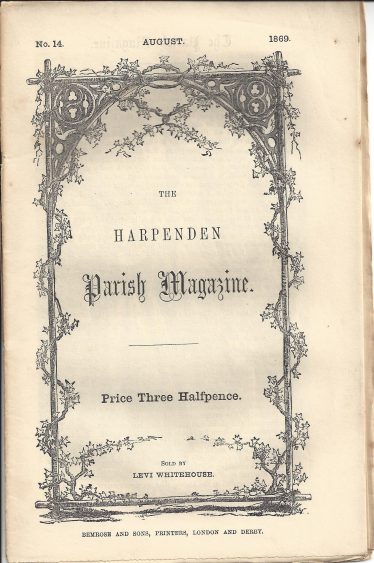 Nothing could have been more dismal or unpromising than the morning of Friday, August 13th, which Mr Lydekker had fixed for the National School feast. All the morning and up to the minute of the children assembling at the Schoolroom, the rain poured steadily. However, just at the proper time it ceased, and at a quarter to 3 o’clock the procession of 150 children marched to Mr Lydekker’s meadow. Cricket, swinging, donkey-riding, and many other amusements kept the children well employed until five o’clock, when the children sat down to a plentiful supply of tea and cake, passing then to Mrs Lydekker’s tastily arranged toy-stall, which was unfortunately obliged to be placed in-doors. Till Seven o’clock the usual games were kept up, and then it was time to say good night. After singing the National Anthem and one or two songs, if not faultlessly, at least not so as to call down any vehement condemnation, hearty cheers were given for Mr and Mrs Lydekker and their family, for Mr and Mrs Vaughan, who greatly regretted not being able to be present, and the proceedings came to an end. The School broke up for the holidays on the Thursday previous; it will reassemble on Monday, September 13th.

*Robert Crips, a successful straw dealer, had recently purchased the house in Kinsbourne Green once used as a school by Mrs Mercier (see Newsletter 124). The property, which he named Verona House, remained in the family until the widowed Mrs Crips died in 1906 aged 93. Her death lead to the sale of the property in 1907 – see the estate map.