Opened in 1913 to support the Conservative and Unionist cause

The Harpenden Conservative and Unionist Association was formed in May 1892 at Childwickbury, the home of Sir Blundell Maple, M.P. after which they met in private houses. Later meetings were held over what is now Barclays Bank in the High Street, but still on an informal basis until 1911, when they became a Limited Company. 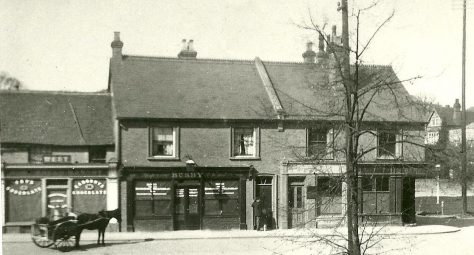 Origins of the Club

Captain C de M Leather raised the question of starting a club in Harpenden to help the Unionist cause and the matter was referred to the Executive Committee on 18th December 1912, meeting at the Fanciers Association room. The subcommittee set up to look into it was Col. G.C. Braithwaite [of Kirkwick], Messrs F.A. Abbott, P.G. Bard, William Franklin, Captain C de M Leather, A. Haner, P. Sutherland-Graeme and A.J. Buck, Hon. Secretary. At the time there were over 600 members and 200 voted for a club with 4 against.

On 1st March 1912 auctioneer R.G. Harding had offered Vaughan House in Vaughan Road for sale at 6.30pm at The George but it was not sold, although the plot of land alongside, which had a 45 foot frontage and was 92 foot deep had been sold to Mr. Brown. A suggestion was made that Vaughan House could be suitable for a club and so Captain Leather and Mr Franklin (Chairman) went to see it at 11.30am on 9th November 1912. It was agreed to purchase it and the new committee held their first meeting on 8th December 1912 at which 50 members attended what was still called The Proposed Harpenden Conservative and Unionist Club. 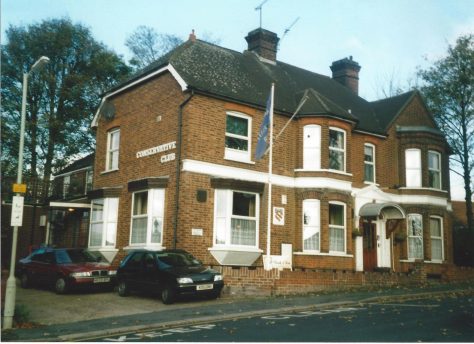 Mr Barron was appointed caretaker on 27th December 1912 at a salary of £1 per week and to include an apartment, coal and wood for heating. The first Fire Insurance Policy, costing 11/9d was taken out on 8th January 1913. The purchase of Vaughan House for £750 was completed on 4th February 1913 and the Club was officially opened on 14th May 1913 by Sir Hildred Carlile M.P. In 1915 325 new members joined, probably the highest total for a year.

Colonel Braithwaite gave up as Life President when he left Harpenden for Hove in June 1920. The premises were valued at £2000 on 16th June 1921 by R.G. Harding.  Mr F. Abbott was then Chairman, until February 1924 when he retired in favour of Mr F. Bard who stayed until February 1931. Mr A.F. Merrett was Manager of the London and County Banking Co (later Westminster Bank from 1905 to 1922, living at Bank House above the bank and later at Bramblewick (3 Hollybush Lane). He was Treasurer of the club from 1912 to 1928 when he retired. A presentation was made to him in August 1928. Another long serving member was the Secretary Mr A.J. Buck. A presentation to him was made in October 1933 when he had served 21 years and attended over 1000 meetings.

At a meeting held on 9 March 1934 when Mr W.E. Sanders became Chairman it was pointed out that 21 years previous there were 123 members and 18 of those were at this meeting.

Mr G.C. Barnes took over as Treasurer from Mr Merrett in 1928. He had lived Hillside (8) Wordsworth Road since 1902 and had opened Smith Marten and Co branch Harpenden in 1886 (Barclays Bank from 1902, at 16 High Street). He had been with them from 1875. He left Harpenden on November 29th [1936/1937] to go to Northumberland as Harpenden was too busy and he wanted somewhere quieter.

At the 21st Annual Dinner held on 9th February 1934 it was announced that there were 323 members to date.

Mr Buck completed 25 years as Secretary on 16th December 1937 and with over 50 years in politics had acted as Sub Agent for Harpenden for seven elections since 1912. A presentation was made to him at the Annual Dinner on 4th February 1938 as a result of Chairman Mr T. Ackroyd’s appeal for a tangible show of thanks to him.

Mr and Mrs Joe Samworth were caretakers for 8 years from 1930 until they left to take over the White Lion, High Street in March 1938 and Mr R.Nelson Jelley came from St Albans in April to take over, including during the early years of the Second World war. At the AGM in 1938 it was pointed out that the bar takings were the lowest for 25 years, so Mr Jelly faced a challenge.

Mr W.E. Sanders retired as Chairman in March 1939 and was elected as Vice President. Part of the building was taken over by The Admiralty in 1944 for war use. Mr A.J. Buck gave up as Secretary in 1946 and left the Committee in 1952. Kelly’s Directory listed Mr A J Palmer as Honorary Secretary by 1956, with Mr George H Penfold as resident caretaker by 1958. 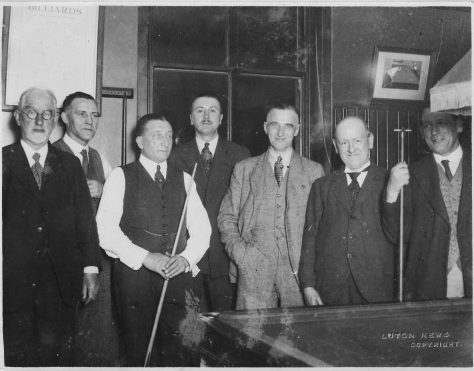 The building was modernised and a new lounge opened in September 1960 along with a large room upstairs for wedding receptions and for several years was a practice room for the Harpenden Light Operatic Society. During this period George C Hunt was resident from 1960 to 1962 and Ralph W T Wood from 1964, with Ann E Wood listed as resident in 1966, 1967 and 1968, when Mr H C Healey was listed as Honorary Secretary until he retired in 1973. Mr L A Roach was listed as Honorary Secretary from 1974, when Kelly’s Directory ceased publishing.

Percy and Norah Brunswick had been resident keepers living in the flat at the front and left in January 1974 after 9 years having been at the Railway Inn in Station Road before that.

The building was closed early September 2008 because of money problems and cash flow. A meeting was held on 25 September 2008 to sort out its future. The Club was reopened early October 2008.

An Indenture was made between Elizabeth Whittingstall Healey of Harpenden [proprietor of Healey’s Brewery] and Sampson John Rumball of St Albans. The executor willed and bequeathed the estate to her daughters, Elizabeth Whittingstall Healey and Augusta Annie Healey and Constance Mary Healey. Elizabeth died on 28th January 1892. For £13,890 E. Healey and S. Rumball sold the purchase to Martha Mardall. The schedule comprised The Harpenden Brewery. It consisted of the dwellings [including The White House], the Brewery Cottage outbuildings, yards, gardens, and pasture land. It had a frontage of 365 feet on the SW side of the High Street and NE Midland Railway.

20 December 1893: Mr Henry Gibson signed to say he wanted freehold of the land.

16 March 1895: An Indenture was made between Martha Mardall and Henry Gibson of St Albans. The sale was for £1,415 and it was stipulated that a “New Road” (i.e. Victoria Road – [or Vaughan Road? ed]) – had to be made 36ft wide across it, as marked on Plan 2 [not currently identified].

On the same day, i.e. 16 March 1895, an Indenture was made between Henry Gibson (mortgagor) and Alfred Coyens of Darenth Road, Stoke Newington, Middlesex (mortgagee). He borrowed £1,000.

26 August 1895: A Conveyance, Mr Henry Gibson to Mr James Bligh for £155-18s-6d on the northern side of a new road or street intended to be called Vaughan Road. A frontage of 74 ft 3inches bounded by the Midland Railway, Martha Mardall, the new road and Henry Gibson. A 9 inch brick wall 6ft high must be maintained the whole length of the north side of the plot of land.

24 October 1900: James Bligh died leaving it to Eleanor (his widow) and Martin Bligh (his father).

13 January 1913: papers stamped by Somerset House but date crossed out and altered to 4 February 1913. The Executors of Eleanor Collins sold the house to the Harpenden Conservative & Unionist Club Ltd for £750.00.

A letter in the safe with these papers was from Chas. S. Tuckey, Solicitors in the High Street, dated 7 March 1913:-

As instructed by you, I have examined the title to the above property and find the same to be a good one and such as to warrant your Bank making an advance on the security.

by Geoff Woodward, with information added from Kelly's Directories