A feature of post-war initiative, when everything was scarce, was the local automobile club where enthusiasts would spend hours re-vamping ancient vintage cars from the 1920’s and persuade them to keep running.  One of these was the Verulam Auto Club. Its members included young engineering apprentices from De Havilland, Handley Page, and elsewhere.  Although centred in St Albans, it had quite a following from young men in Harpenden. 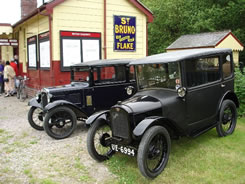 Meeting in the Public Bar of the Six Bells in St Michaels, each weekend would see the Public House Car Park filled with outlandish vehicles from the 1920’s: Austin 7’s, Morris Minors, Jowitt 2-strokes and a variety of other long forgotten models. These were the days of ‘Genevieve’ when no one had much money and new cars were on a 12-month waiting list anyway. If you could afford to buy one, you could sell it later at a profit in the second-hand market.

There were no motorways, no breathalyser and no MOT. All you needed was an engineer’s report which could be obtained quite easily for a few quid from a local back-street garage: ‘You will get those brakes fixed, won’t you sir!’ The maximum speed for a commercial vehicle was supposed to be 20 mph, and to go north without the M1 you took to the Watling Street (A5) with no by-passes, and with a speed limit of 15 mph right through the middle of Redbourn, Markyate and Dunstable.

The more outlandish your vintage car, the prettier the girl you could get to accompany you. 0-60 mph was about two minutes, if indeed you could get there. And you needed some nifty double-declutching, for there were no synchromesh gearboxes.

There was also a group of young Harpenden chaps in Westfield Road who ran a workshop doing up vintage sports cars, who called themselves ‘Scuderi Cemeteri’ for obvious reasons but they were out of my price bracket and I did not know much about them.