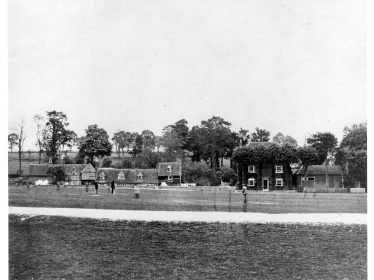 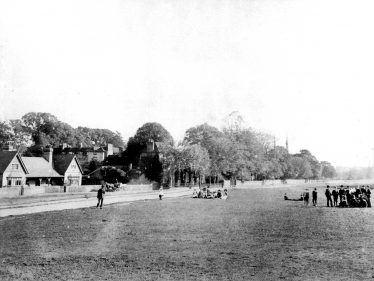 zoom
The Institute - with lads and lassies playing on the Common
LHS archive, HC 184

This article was first published in newsletter 37, May 1985.

In the spring of 1886 the Harpenden Lecture Institute and Reading Club were looking for new premises, without much success.  Their lease on an upstairs corner room of the coffee shop, which stood where Barclays Bank now stands, had expired and although the Committee had agreed to rent rooms from a company who were planning to build a public hall, the scheme had fallen through.

Mr Henry Tylston Hodgson, that great benefactor of so many village organisations, came to the rescue, and in June 1886 offered to erect a suitable building together with a caretaker’s cottage, and asked whether the Committee would be interested in a three-year lease at an annual rental of £30.  The Committee thanked him for his kind offer and gladly accepted.

So the Institute (now the Friends’ Meeting House) opened on Monday 10th January 1887 with a soiree attended by 170 guests, at which there were several congratulatory speeches before Mrs Hodgson declared the Institute open.  There then followed a most enjoyable entertainment at which, amongst the usual musical items, Mr T Wilson’s microscopes and Mr J Busby’s galvanic battery afforded much pleasure.  A refreshment buffet, free to all comers, was arranged in one of the rooms.

The building itself was much admired.  There was a large lecture room capable of seating over a hundred people and a reading room well supplied with periodicals, open to subscribers every weekday from 8.30am to 10pm.  The reading room also contained a lending library open on Saturday afternoons from 4 till 5 pm.  There was, too, a recreation room open to members only, where bagatelle, chess, draughts, etc were provided, although playing any game for money was strictly prohibited.  Smoking was allowed, in this room only and refreshments were available but no alcoholic drinks.

The Institute soon became established as a focal point of social life in the village.  So much so, in fact, that in popular usage both the building and the society which used it, were known as the Institute.  There was at this time no public hall in Harpenden and public meetings were held in either the National or British School rooms or occasionally in Rothamsted Laboratory, so the provision of a large Hall, available for booking, was much appreciated.

A wide range of interests

During the first year membership of the Institute increased by 77% from 74 to 131.  Other organisations used the building too.  One, the Young Mens’ Mutual Improvement Society, immediately became associated with the Institute.  Its members met on Thursday evenings during the winter months for debates, lectures and entertainments.

There was also a flourishing Art Class, held on Saturday afternoons.  In 1887 it had students from Redbourn, Markyate and Welwyn as well as Harpenden.

The Institute had four grades of membership, subscriptions representing a decreasing quality of benefits ranging from £1 a year to four shillings.  First class members paid £1 and had all the advantages of the Institute for themselves and their families.  Second class members paid 15 shillings for the full facilities for themselves only.  Third class members could use all the facilities except for the lending library for seven shillings and sixpence.  The most basic membership at four shillings a year or one shilling and sixpence a quarter, enabled members to use the Reading and Recreation Rooms from 5 to 10pm each evening.

Visitors to Harpenden were allowed the use of the Reading Room at a charge of one penny a day, and during the first year there were 392 of such visits.

For over twenty years the Institute flourished in its new home.  But the Society had been founded in 1858, so perhaps it is not surprising that by the early years of the new century it had acquired a rather staid image, and it seems to have been unable to attract enough new, younger members to ensure its continued life.  A Special General Meeting held on 14th December 1911 accepted the Committee’s recommendation that the affairs of the Institute should be wound up at the end of the month.  Some advance bookings for the rooms had been accepted for the first few weeks of the new year, so the Society gave formal notice to Mr Hodgson from the end of March, 1912.

The building became a military hospital for the first eighteen months of the Great War for the Territorials who were stationed in Harpenden.  After the war it became the headquarters of the local branch of the British Legion.