'The Third' have been Scouting since 1908

Started on the Common, still in Southdown Road 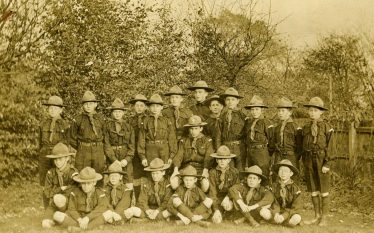 The oldest Scout troop in Harpenden is ‘The Third’, as it has always been known, which can trace its history in an unbroken line back to the original formation of the Boy Scout movement in 1908, following Robert Baden-Powell’s experimental boys’ camp in 1907 on Brownsea Island in Poole Harbour. Although no official records appear to have survived for the period earlier than the 1920s, the evidence for Harpenden’s participation in scouting from the start is in reminiscences of the late Frank Popplewell (1894-1978), as told to the 3rd Harpenden Rover Scout Crew in February 1957 and published later in the Harpenden Free Press.

Frank said that in 1908 he and a few other boys, travelling daily by train to St Albans School, bought Baden-Powell’s Scouting for Boys in its weekly parts and formed themselves into an unofficial patrol of scouts. Frank lived in Spencer Road at the time and his pals included Fred Hopwood , also from Spencer Road, Douglas Steers from Salisbury Avenue and Eric Freeman. They took advantage of the rural surroundings of Harpenden, notably the Common, to practise stalking, camping and other activities described by B-P in his book.

These were certainly not the only group of boys in Harpenden doing some unofficial scouting, because within a year a troop was in existence, with adult leaders. There were 22 scouts, led by the scoutmaster Mr H Holland and in November 1909 a group of “gentlemen who consented to serve” formed a Local Association. The record of this is also in a report in the Free Press in 1957, based on the Association’s old minute book which already had “charred edges” after it had been saved from a fire. The minute book, which seems to have been the only official record, has now been lost entirely.

Rapid growth of scouting in Harpenden

The number of boys quickly became too large for a single troop. In February 1910 the old minute book recorded a new troop formed at St Hilda ’s School, the first of several school troops to exist in Harpenden. By October 1911 it seems that the scouts had been divided into several groups and given numbers for the first time. Largest of these was the 1st Harpenden (21 scouts), there was a 2nd Harpenden Troop based at Coldharbour (11 scouts) and the 3rd Harpenden was described as “Grammar School Boys” with six scouts. The school troops were at St Hilda’s and Hardenwick.

At that time the 17-year-old Frank Popplewell had returned to the scouts after a spell with the Church Lads’ Brigade at St John’s Church, which had a band! In the long-lost minute book, he was listed in 1911 as Assistant to the 3rd Harpenden’s Scoutmaster, Mr E C Bates , and in 1912 Frank was granted a warrant, having reached the age of 18. By then, the Third had a band too!

The accompanying picture dates from that year and is the earliest known photograph of any Scout troop in Harpenden. The original is in the possession of Bill Culley who was Scoutmaster of The Third in the 1950s and 1960s. Frank gave it in 1963 to Bill ‘s father George Culley , former Chairman of the 3rd Harpenden Group and it was preserved in one of her scrapbooks by his wife Gladys .

In his later years, Frank referred to himself as having “started” the Third, though it is not clear whether he was referring to his patrol of boys on Harpenden Common in 1908 or the newly-numbered 3rd Harpenden listed in 1911.

The Local Association minute book having disappeared, the Harpenden Free Press reports from 1957 remain the only evidence of the origins of Scouting in Harpenden. Official records at Scout Headquarters in London began only in 1919, at a time when a great number of Scout Troops and Cub Packs (cubs started in 1914) had been closed due to the First World War.

After the First World War

Only one local group, the 3rd Harpenden, appears in these records for 1919. The Scoutmaster, Harold Clark, of Spencer Road, noted on the Troop Registration form: “Date of original registration by Local Association cannot be traced”. Mr Clark gives the date of his own warrant as Scoutmaster as 9th October, 1917. He may have taken over from Mr Bates , though there is no mention of it. The fact that he was appointed in 1917 is, perhaps, the clearest indication that the Third had continued in existence throughout the war.

By 1920, however, things were on a much more organised footing. The troops registered were the First, Second, Third, Fourth (St George’s School) and Fifth (Lady Ludlow’s Own). The Third seems to have been the strongest, with 25 Scouts and the Scoutmaster was Mr R T Saunders of Riversdale, Harpenden. In 1921 one of its lads, John Webb, was the first Harpenden boy to gain the coveted King’s Scout badge. John continued actively in scouting into the 1960s.

Although Harpenden Common was always a perfect ground for scout activities, a place indoors was always needed. The original HQ had been in a barn on an unknown site owned by Mr Eustace Salisbury, but after the 1914-18 war, a timber building which had been used as a rifle range in Southdown Road, opposite the Dell Ponds, came available as a Scout Hut. The hut was rented by the Local Association for a nominal sum from Mr Leslie Walton, one of its Vice-presidents. In 1931, however, Mr Walton left Harpenden and the new owner required the hut to be removed, presumably to allow the building of new houses. There was a hectic search for a new meeting place for the Third, who appeared to be the only troop occupying the HQ.  A building at the Spencer Road waterworks was rejected as being “too palatial” and a room over Chirney’s motor garage next to The George was used temporarily, despite the proximity of “a latrine near the steps up to the room”.

A bold approach was at hand, however, and in November 1931 a third of an acre was purchased at the rear of the previous headquarters, on land adjacent to the railway.

Mr H S Gray built the new hut at no profit to himself, possibly using some timbers from the old rifle range building, and on Saturday 2nd July, 1932, the new Scout Hut was formally opened by Admiral Sir Lionel Halsey.

Although at various times the Scout Hut has been used by other Harpenden groups, it was always used mainly as the Third’s Headquarters and was eventually leased exclusively to the group. Still in use today, the Scout Hut with its wonderful, almost secret grounds, and the proximity to Harpenden Common have always lent a particular character to The Third.

(Edited extracts from ‘The Third, a Centenary History’, published 2008)