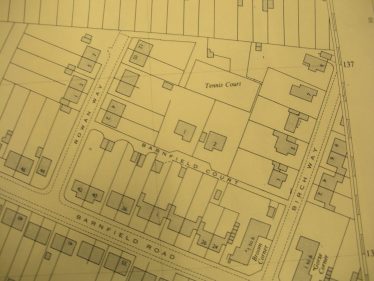 Barnfield Tennis Club pavilion was completely destroyed in a fire which broke out in the early hours of Saturday morning, November 6.

After an intense blaze, all that remained standing were the fronts of two dressing rooms and a tottering brick chimney. The cause of the fire is not known at present.

The owner of the pavilion, Mr [J F] Fowler, local builder and [coun]cillor, told the Free Press [that] in its site between Barnfield [Road] and Topstreet Way and [accessed] by Birch-way and Rowan-[way] the pavilion was very close [to] neighbouring houses.

[F]ortunately, there was no wind [to fan] the fire, otherwise [there] would certainly have been [many] fences and trees in flames.

Fire became noticed about [3.50] a.m. and many of the people in the neighbourhood .. heard a series of sharp cracks, which was  actually the asbestos cement roof cracking. Mr Fowler, an ex R.N.V.R. officer, described it as “just like the sound of shots from an Oerlikon gun.”

From his home in 9, Birch Way, [he] looked out and saw what [ap]peared to be a bonfire on the [side]of the club house.

It appeared that the fire was [then] flaring up, and within a few [minutes] it became obvious that the building was on fire.

Mr Fowler telephoned for the Fire Brigade, but found that this [had] already been done by several [other] residents. Mr G. Strauli a Club member, called out the [local] member of Harpenden Fire [Brigade] Mr. G. Griffin, who lives, [in] Barnfield-road.

Most of the neighbourhood was awake, and there were [lights] at many upstairs windows [as] people watched the blaze from four directions.

The building was of timber and quickly consumed in flames.  [The] Harpenden Fire Brigade [tried] but were unable to do [more] than check the blaze, and [the] building was a total loss. The contents, including two table tennis tables and [some] 40 chairs, were completely destroyed.

The late Mr. J. T. Fowler built the pavilion 21 years ago as a recreational centre for the new [houses] in the area.  Two tennis [courts] were provided and later [a] third and there was also a [thriving] table tennis club com[peting] in the St. Albans and [District] League.

The table tennis enthusiasts [won] the League championship[many] times before the war, three [times] in consecutive seasons. Their [members/winners] included a singles cham[pion] in Brian Griffiths and doubles [cham]pions in Leslie Fowler and [Mr] Dunckley.

The present Chairman is Mr. [?]L. Desbrow, and Mr. and Mrs. [….]chmore are Hon Treasurers.

This transcript was taken from film of a bound copy of the  newspaper and the words in [..] are possible interpretations of the indecipherable areas near the spine.