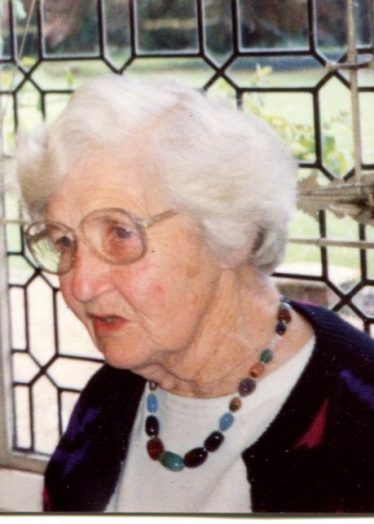 The Club was founded in 1927, but Ladies hockey had been played as early as 1900 when Sylvia Creke, granddaughter of Sir John Lawes of Rothamsted Manor, started the Rothamsted Ramblers. Miss Rhoda Wilson [sister of Theodora] – a founder member – says that they wore navy-blue skirts, white blouses and scarlet ties and a silver brooch with the letters R R and they played on the Paddock at Hatching Green which was levelled for them by Mr Hodgson [of Welcombe]. 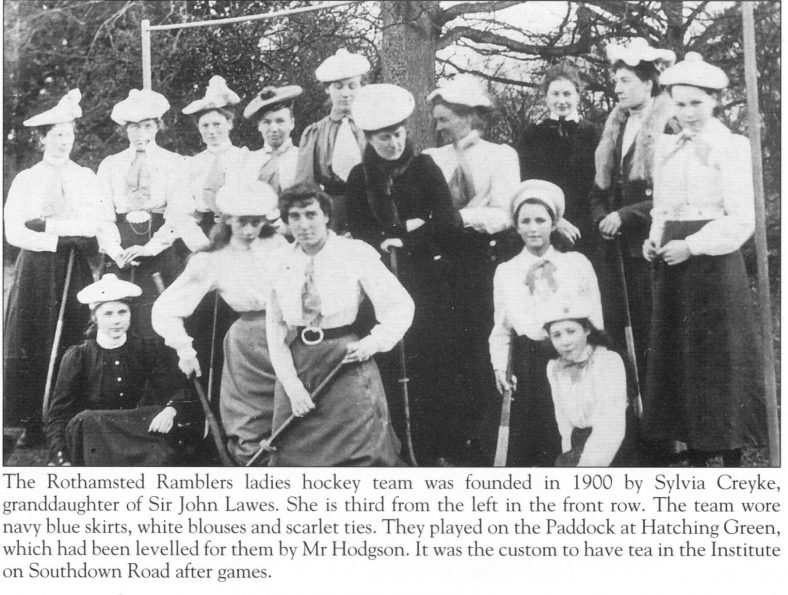 “There was no pavilion or hut but a large piece of wood with hooks on it just inside the gate”. “We had tea in the Institute (now the Friends’ Meeting House), and lemons at half-time and took the Pommade Devine (Ointment) with us for our bruises.”  Beatrice Clutterbuck (nee Lydekker) in her memoirs says “we played every Monday, and had quite a lot of Saturday matches, sometimes going in the Rothamsted bus…… we played the St Albans Grasshoppers who were a very smart lot, but finally we came out on top and won all our matches. Hilda was very good, as were the Peakes of Redbourn and the Wilsons [of Rivers Lodge] and the Blakes [of Bowers House].”

The Ramblers seem to have disbanded sometime before the First World War but hockey was again played on the paddock in the 1920s when Mr and Mrs Taylor, who then lived at Rothamsted Lodge, arranged hockey games there for young people in the holidays, among them Jane Meiklejohn, later an early member of Harpenden Ladies Hockey Club. The Rothamsted Experimental Station Hockey Club began in the winter of 1919 in a field near the Paddock. At first this was a mixed club and among them was Muriel Latter. In 1926 Dr Maclean came to practise in Harpenden. His wife, Greta, was an excellent player and a hockey enthusiast. In 1927 Muriel Latter got in touch with Greta and the Harpenden Ladies Hockey Club was formed.

For their first season Harpenden Ladies played at the Paddock on the same pitch – “What I remember is walking home to Luton Road through the Garden Fields in the dark”. They wore navy tunics, white blouses and yellow stockings and girdles; this was later changed to navy shorts and orange knee length socks.

In 1928 the Club rented its own pitch in Piggotts field behind Townsend Lane. Jane Meiklejohn says “it was U-shaped, the sides higher than the middle and it also sloped upwards from east to west. The great Marjorie Pollard visited us and had a look at the  pitch. Had it been better she might have joined us instead of forming a club at Stevenage”. Carol West remembers that most goals were scored downhill and that it was quite possible to hit the ball uphill and that it would roll down again. Mr Veale was very generous with help for the rent and also lent £15 to buy a ‘Pavilion’. The Club bought a storm lantern!

In 1930 the Club was looking for a better pitch. Mrs Burgin investigated the possibility of one on the Common but the move in 1933 was to a field where Roundwood School now stands. The owner, Mr Titmus, levelled it and the pavilion was moved from Townsend Lane and re-erected. The grass roller was horse drawn and special shoes were bought for the horse to wear so that its hoofmarks did not make ruts in the pitch. The rest of the work was done by the players themselves. Mrs. Veale remembers marking the pitch and Margaret Briggs wheeling her own lawnmower to the pitch on a wheelbarrow. We continued to play there until the War put an end to hockey for six years.

By the time it was possible to start again, Rothamsted Park had been bought by Harpenden Urban District Council and Harpenden Ladies had the choice of a place for a pitch. Councillor Gingell was very helpful in making ready the pitch and always continued his interest in Ladies’ hockey. At first there was only a small hut for changing but it was later extended with the help of money raised by the Men’s and Ladies’ Hockey Clubs and Harpenden Wednesday Cricket Club and it has again been enlarged and there are now changing rooms and facilities for tea.

Team teas have always been an important part of Harpenden Hockey.   Miss Wilson and Miss Popplewell remember them in 1900 [in The Institute]. “In the Roundwood days tea was either in Mrs Veale’s or Mrs West’s house and when the club played in the Park and Mrs Maclean lived in Park Avenue, there were memorable teas in her house where everyone sat round her large dining table. Now that the Pavilion is equipped, the ladies not only play matches but serve teas for themselves and the Men’s Hockey as well.”

Mixed Hockey has always been associated with the Ladies’ Club. Sunday afternoon games were played at Piggotts Field and Roundwood Park and in Rothamsted Park and the fees helped the Club’s finances. Mrs Maclean organised the games there and also holiday hockey and there was always a game on Boxing Day. Now there are some Sunday fixtures for a team from the Men’s and Ladies’ Clubs.

The Club always expected to provide an umpire and Mr Rowley umpired for the Ramblers, Dr Maclean for Mixed Hockey and Nora Veale in the early days of Harpenden Ladies. Then Jane Meiklejohn and later Rosa Leitch (B Register) and Marjorie Bawden (A Register) and Margaret Briggs (C Register) followed on and more recently Catherine Beresford, Judy Munton and Doris Wellstead (all on the C Register) as umpires for the club.

In 1950 two of us started Indoor Hockey in a disused bus garage in St Albans and since then there have been evening tournaments with local clubs. Now that Harpenden has a Sports Hall the Club plays regularly and last season did well in the local tournament and went through to the second round in Cambridge. It could be said that the  Club is also celebrating a Silver Jubilee of Indoor Hockey – something few clubs can aspire to. Like all clubs, there have been the good seasons and the not so good. “We entered the first ever County Tournament at Radlett in 1930 and were beaten in the first round, but thereafter won each year until the war”. Although we have not won since we have often been nearly there and there is always hope in the Jubilee season!

Harpenden Ladies had never been a large club or a wealthy one but we have always managed to raise enough money to keep going and there are many kind friends who have helped.

Until the war, there were mid-week matches and practices and Greta Maclean, who captained for 22 years, insisted on practice to improve – “Greta would make me practise a pass until I got it exactly where she wanted it”, and she built up a team who played together rather than as eleven individuals. Although now there is little time for mid-week play during the day there is team training and indoor hockey in the evenings and once more there is a get-together at Midweek to enjoy hockey between one Saturday and the next.

Among our members have been Territorial and County Umpires, Players and Selectors and some have served on County, Territorial and All-England Committees and one as the President of Hertfordshire.

We arranged a Territorial match and, with Rothamsted, entertained a Canadian Touring Team, and we played on the South Bank in London during the Festival of Britain. In our lighter moments, we were St Trinians in a Harpenden Carnival. 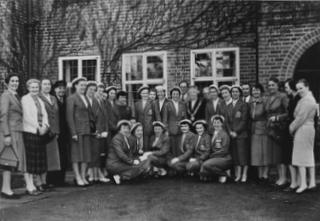 I am most grateful to Miss R Wilson (founder member of the Ramblers), Miss Popplewell who played hockey at that time, and Miss C Clutterbuck, whose mother played for the Ramblers, and Dr Katherine Warington from Rothamsted Experimental Station, and later a founder member of Harpenden Ladies Hockey Club, for their help and interest in my writing of this history.

Now the club is a part of Harpenden Hockey Club. The Club’s website includes a history, which shows how the Ladies Club had led the way with mixed hockey in Rothamsted Park in the 1940s, until the Men’s Hockey Club was founded in 1949 under the presidency of Dr Donald McLean, whose wife, Greta, had co-founded the Ladies Club in 1927.

By Lady Marjorie Bawden (written in 1973)