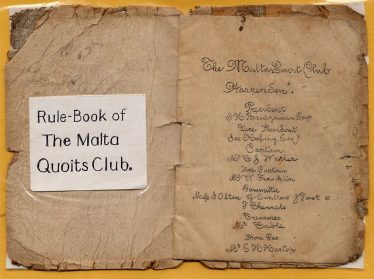 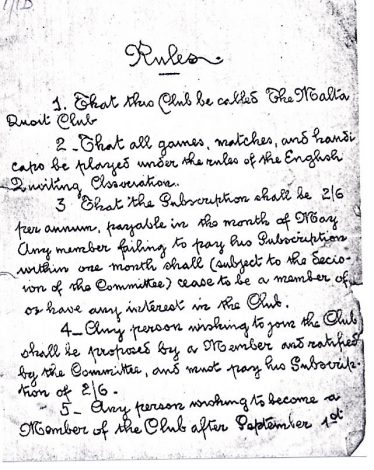 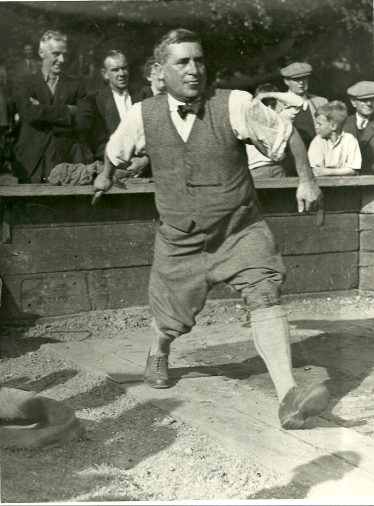 Following a Herts Advertiser announcement of a proposal to revive the title of “Ye Olde Harpenden Quoits Club” in connection with the club being formed to use the bed in Rothamsted Park provided by Mr F N Gingell, a reporter was put in touch with Mr Claude J Watler of 3 Cravells Road, founder of the original club.

“A Herts Advertiser reporter who saw Mr Watler this week soon discovered that the game of quoits in Harpenden and, in fact in West Herts can only be recalled in direct association with his name, for he not only founded the original club at Batford, formed when Mr T Spratley was licensee of The Malta, but himself provided the beds, pins, sleepers, clay and surrounding seats for onlookers at his own expense.  He himself built the beds in 1901-2 and captained the club which later changed its name to [“Ye Olde Harpenden Quoits Club”] for nearly twenty years.  the club was disbanded in 1924-5.  …

“Now in his seventy-ninth year, Mr Watler’s association with the game goes back to 1892-93, when he played for the Noel Park Quoit Club, Wood Green. …

“He returned to Harpenden in 1901, when he became carpenter in the service of the late Sir Charles Lawes-Wittewronge.  Quoits, it appears, was played in Rothamsted Park as long ago as 1908, as Mr Watler had the task of laying the quoits beds for the contest in connection with the flower show held in the Park in that year, for which a prize of £2 was offered by the late Mr F H Bridgeman.

“Besides founding the club at Batford, Mr Watler had a hand in the provision of a quoit bed at The Cock, High Street, and recalls that there were several clubs in being about the same time, including those at the Old Red Lion [68-72 High Street], the Gibraltar, Batford, and the Plough and Harrow [Southdown].”

Though Mr Watler had had to give up playing in the early 1920s, due to illness, he was taken to see the opening of the new bed in Rothamsted Park and said he would follow the fortunes of the new club with interest.  Mr Watler had a family of eight, but only “one son, Mr Cecil Watler shared his father’s love of the game”.

Extracts from a news-cutting, undated, in the History Society archives.