The turbulent lives of Peter Wilson's ancestor, Peter Parrot and his associates

This report of Peter Wilson’s talk was first published in Newsletter 136, December 2018.

Peter Wilson was born at the Red House in 1950 and has lived in Southdown for the whole of his life, other than 2 years spent in Singapore. His father and brother ran their garage business ‘Wilson Brothers’ behind the Plough and Harrow pub from 1947 until the building of the first industrial units on the Southdown Industrial Estate.

Peter began his presentation by running through the first part of his family history in Harpenden extending back for 12 generations and more than 300 years to 1650, which he had covered in an earlier presentation some time ago. Editor’s note: see Newsletter 86, September 2001.

The earlier presentation focused on the life of a 7th generation family member called Peter Parrot. He was born in Harpenden in 1791 as an illegitimate child born to a pauper, Elizabeth Parrot, with the father initially unknown but later discovered via parish church records to be John Oney. Elizabeth was paid by the Overseers of the Poor a sum of two pounds for her “month of lying in” or recuperation period after giving birth to Peter. A month later they paid 12 guineas to the church for the subsequent care of her and the child over the following three years.

Moving on some 9 years another birth fathered by John Oney to his legitimate wife Mary is named John, thus Peter Parrot now has a half brother also living in Harpenden. After a further 20 years, Peter and John were in trouble with the law. This begins the stories of several well documented run-ins with the law.

A convict hulk in Bermuda dockyard

In 1820 they are charged with stealing a 200 lbs anvil from John Lines.  Peter is imprisoned and sentenced to hard labour while John is acquitted possibly because of his age. They are in trouble again in 1823 when both are sentenced to 7 years’ transportation for harbouring a felon. Peter is sent to Bermuda and John to Australia. Peter sailed to Bermuda on HMS Antelope which, upon arrival, was converted to a prison hulk.

This coincided with the need for a base for the British fleet and a dockyard to combat the growing threat from privateers in the Caribbean in many cases encouraged by Napoleon. In the same year Parliament authorised the use of convicts to build the dockyard.

Upon completion of his sentence Peter was pardoned and granted passage on a vessel bound for the United Kingdom or Ireland arriving back in Harpenden and rejoining his wife and children in 1828. Interestingly, whereas convicts in Australia were allowed or encouraged to stay after completing their sentence, that was not the case in Bermuda where all convicts had to leave at the end of their sentence. 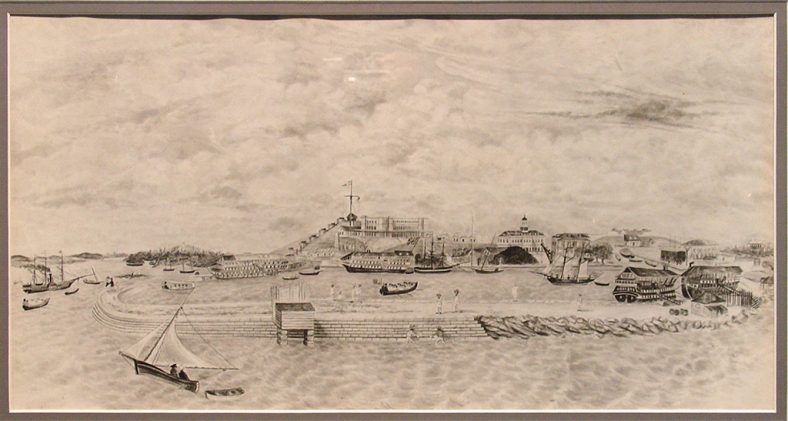 This concluded the recapitulation and we rejoin Peter living in Harpenden in 1831 and his association with a William Wells and his family who were living at “Karsman Green” (Kingsbourne/Kinsbourne Green) who was made homeless and ended up living on Church Green in “the cage” (the local lock up). This is where he met the Parrot family. The two families looked for other places to live and obtained permission from a magistrate to live in a parish house on Church Green called the Tread Wheel House along with another two families. The overseers objected to this and gave notice for the families to leave but they refused. Later in 1831 they were evicted by the Court. With nowhere to live the Parrot and Wells families and another group were in a desperate state. At this point the landlord of the Old Cock pub came to their rescue and allowed all 16 of them to stay in his stables. 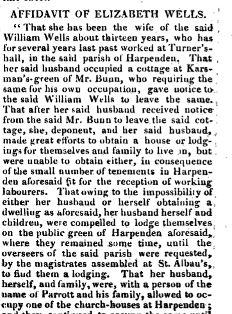 The first part of the affidavit of Elizabeth Wells: the families were subsequently evicted from the church houses (Cobbett’s Weekly Political Register, 9 June 1832)

There is no further information immediately after this episode but on 15th March 1834 Parrot again finds himself convicted for stealing along with another man called Joseph Lines. Joseph was already “known” to the authorities as he had spent a year in Bedford Gaol for stealing a chicken. The men were spotted by the gamekeeper at Luton Hoo, then the seat of the Marquis of Bute, carrying off, on a cart, a large number of cherry trees (probably saplings due to be planted) taken from the grounds of the estate. Parrot was sentenced to life this time and was transported to Van Diemens Land (Tasmania). On this occasion both he and Joseph Lines were sent to Van Diemens Land (VDL). They sailed on the Sir Godfrey Webster on 23 May 1834, spent 104 days at sea, and arrived on 4 September 1834. One can only imagine what conditions must have been like on that voyage. 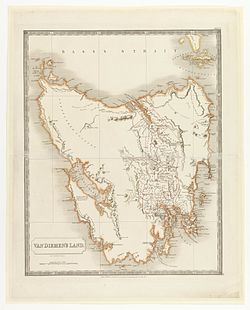 Life in VDL was based on the assignment system whereby a convict was typically allocated to a local land owner to carry out duties on his behalf.  They had their own rooms in town and were free to come and go whilst not working. The more hardy criminals were allocated to public works which often meant working in chain gangs on road parties. 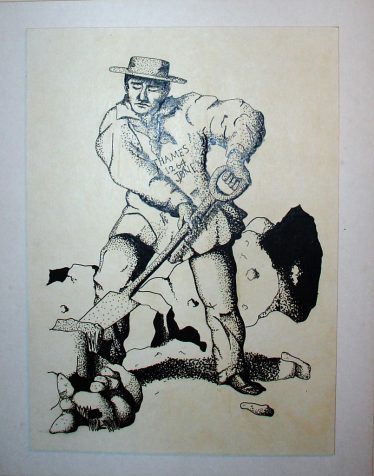 One would have thought that having been transported for life Peter would have learned his lesson but apparently not as he continued to offend with many minor offences and was duly further punished by being given work on the road gangs. These gangs were responsible for the road between Hobart in the south to Launceston in the north of the island. Places along this road are mentioned in Peter’s record. Eventually he received his ticket of leave in 1845 which meant he was free as long as he behaved and subject to reporting to the police at regular intervals.

In 1847 he re-married to Francis McCauley, presumably bigamously, to which the law did not turn a blind eye but there is no mention of any action being taken over this. Five years later in 1852 Peter passed away in Hobart, the death being witnessed by Francis.

Back home in Harpenden

Life didn’t treat Peter’s wife (Elizabeth) and family back in England any better. She was a pauper and received relief from the parish while Peter was in Bermuda but by the time of his departure to VDL the system for caring for the poor was changing. The old system, established in 1601, was resented by the middle and upper classes and many believed it encouraged the poor to have children they couldn’t afford. So in 1834 the system changed and Union work houses were introduced and anyone in need of help would have to work and expect to be split from their families. Conditions were terrible and only those in desperate need applied. The St Albans workhouse was located in Waverley Road. Elizabeth and her enhanced family were admitted to the work house numerous times each year but not all of the children were with her on every occasion. However, things seemed to change a little for the better because in the 1851 Census for Luton she is shown as having a job, as do four of her children. In 1861 she is still employed in Luton and passes away at Bedford in 1871.

At the end of the presentation Peter Wilson posed a number of questions including; “Was Peter Parrot’s life that of a rogue and career criminal or was he simply the victim of poverty”? “Could the church have done more for them – the Church Green incident must have clearly shown the authorities that not just one but four families in need of help.” Also “What was the housing situation like in 1831 when the population was 1,972”?

What is very clear is that in terms of research into family history progress is much easier if your ancestors are either land owners or famous, like the Marquis of Bute, or infamous like Peter Parrot given that both land and Court records are both extensive and complete going back for hundreds of years!

The ongoing story of the eviction of four families (including those of Wells and Jennings) from the Harpenden Poor House in 1831 is covered in great detail by William Cobbett in his ‘Weekly Political Register’ for 9 June 1832. ‘The Harpenden Case’ as Cobbett called it, covers several pages and is a fascinating read. The Poor House had a treadmill, on which the inhabitants ‘worked’ and the ejected families were indeed ‘in a poor state’ – dumped on to Church Green in some sort of ‘lockup’ that was open to the elements. 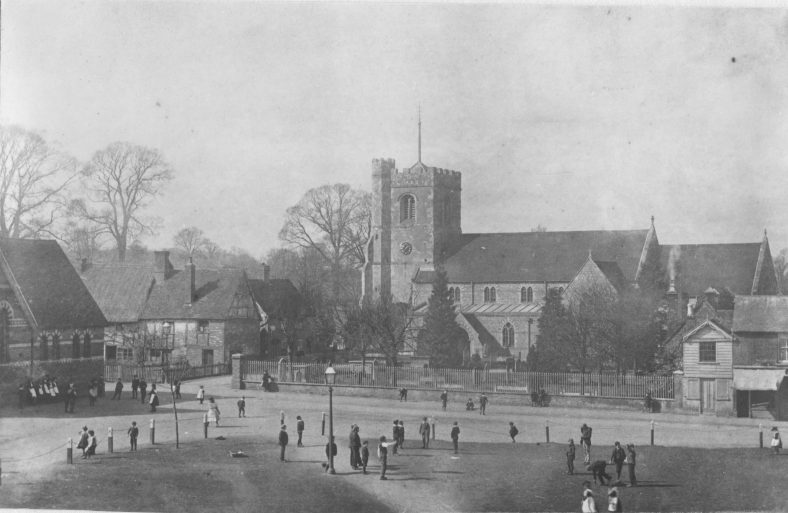 Church Green c.1897, from the viewpoint of Mr Smith’s school. The site of the lock-up is to the right of the parish church – LHS 12659

It is a sorry tale; the underlying problem being the lack of housing at the time. John Stancell Smith, who ran a school in a building overlooking Church Green and witnessed these events from his bedroom window, told William Wells that he would be answerable for the rent to anyone who would let a property to Wells. None was to be had.

Little is known about the ‘Cage’ – what we do know is discussed in ‘Punishments and Prisons: From the Stocks to the House of Correction’.