From the Stocks to the House of Correction

zoom
Abbey Gatehouse, built in c.1090. A drawing viewed from the south, 1787, when the Gateway served as the Libery Gaol. "The small erections adjoining to it have been lately added, and are the house for the gaoler, and other necessary offices".
St Albans 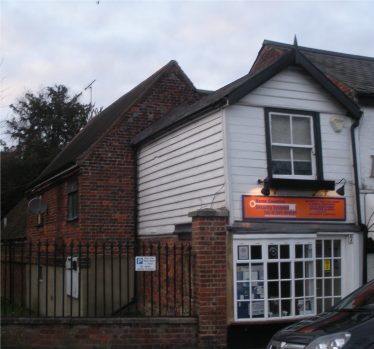 zoom
The 'Widows' houses' and shop on the site of the 'lock-up', Church Green
Rosemary Ross

Glimpses of local crimes and punishments can be found in the Court Rolls of the Wheathampstead Manors (held by Westminster Abbey).  According to the Victoria County History, “The abbot and convent of Westminster … exercised at Wheathampstead the right to hold courts-leet, courts-baron and views of frankpledge” – an Anglo-Saxon system for keeping the peace which was supervised by the manor court after the Norman Conquest.  Few records have survived, but in 1408 there was a requirement that the lord should have in his manor a pillory, stocks and a ‘cokyng stol’.  In 1613 it was ordered that a cucking stool be made, one for Wheathampstead and one for Harpenden – a cucking stool being a chair, on a long arm which moved up and down on a central pivot, in which disorderly women were ducked as punishment.

Although it is not known where they stood, there is a bill for £1 4 shillings for the ‘building of the stocks’.

The Cage or lock-up:

In 1819 the authorities in Harpenden proposed building a ‘cage’ to house a treadmill on which the poor could be employed:  these were new inventions used in prisons.  However, it seems that in suggesting that the poor might be so employed Harpenden stepping outside the law.  It was eventually agreed at a Vestry meeting at The Bull in 1826 “to erect a building 34 feet high, 12 feet wide in the clear” – but there is no sign from early drawings or photos of such a tall building.   As far as we can tell, the ‘lock-up’ was at the southern end of the range of row of Church Houses for elderly widows, dated 1774, on the east side of the churchyard.

In 1823 the Overseers of the Poor paid for handcuffs

By the early nineteenth century there were three prisons in St Albans; Harpenden people could have been sent to any of them:

It was “a dark closet” with “no firing”, the men and women’s bedrooms “separated by an open railing, the bars of which are about six inches distant from each other”; the day-room opened onto the street, with bars “wide enough to admit anything … of course spirits could not be excluded” – according to Thomas Fowell Buxton’s report, An Inquiry whether crime and misery are produced or prevented by our present system of Prison Discipline, 29 January 1819.  He concluded that there were “violations of natural justice”.

There was “no separation, except between men and women”.  The men’s sleeping room was “without air or light, except what may be received through a grating, which opens into a passage, which opens into the day-room, which communicates with the yard.” The men were employed in making straw hats, baskets etc, but the women had no work at all.  (Extracts from Thomas Fowell Buxton’s Inquiry report of his visit on 20 January 1818.)

The House of Correction:

On the other side of the Abbey Gateway – capacity: 30 prisoners in three rooms.  97 were committed in 1818.

This was generally for “Persons sentenced to hard labour”.  There was “no salary for a clergyman, and no provision of labour;  as for correction, therefore, these prisoners are left to improve themselves; with no other assistance than the conversation and examples of their associates”.  The day room was “very close and emitted a very offensive smell”.  There was “no infirmary, no clothes were allowed and all were very ragged”.  (Extracts from Thomas Fowell Buxton’s Inquiry report of his visit on 20 January 1818.)

Opened on 1 November 1867.  It stood on an eminence near the railway station and could be seen for miles around.  It was castellated, and had a large air shaft which conveyed fresh air to every cell.  Each cell was 12 feet long, 7 feet wide and 9 feet high, with a small window, and a grating through which hot air was let in.  In the centre of the cell door was a ‘ration-trap’.  Each cell had a washing bowl with a tap over it and a water closet with its trap.