Young Offenders Hostel in Harpenden in the 1920s

Background to the case

The St. Vincent de Paul Society is a large Roman Catholic organisation in England and Wales, with the principal object of assisting poor and sick. Catholics and others throughout the world. At their annual meeting in Portsmouth Guildhall at the end of July/beginning of August 1931 they were to discuss the Society’s various social works, including the aftercare of youth, Borstal boys and girls, emigration work, leakage, welfare, etc.

The Society was also active in Ireland.

The hostel in Harpenden Hostel was opened on 10th October 1924 by Cardinal Bourne, Archbishop of Westminster and housed 24 boys. It stood on Leyton Green near the Oddfellows Arms and Frederick Sear was the Superintendent during 1927, 8 and 9 that we know of. The Hostel closed on the 18th July 1931.

Newspaper Reports of the Crime

There are many reports of the 1925 shooting of a policeman in Wolverhampton by some youths who had escaped from what is variously described as a probation hostel or industrial school run by the Society of St Vincent de Paul in Harpenden in Midlands newspapers of the time (including the Lancashire Evening Post, Coventry Evening Telegraph, Staffordshire Sentinel and also the Lanarkshire Sunday Post which included a photograph of one of the youths).The three youths had been inmates in Harpenden and escaped while on their way to confessions at the Catholic Church. They made their way along Luton Road and after walking some distance Heggerty asked Dixon to lift a piece of turf and on doing so found a revolver in a red rag. Heggerty then said he was going to break into some houses and would use the revolver if necessary. They walked to Dunstable, hitched a lift to Birmingham, via Coventry, then walked to Wolverhampton where the crime took place. All the newspaper reports mention St. Vincent de Paul in Harpenden. The two older youths were sentenced to death, but this was commuted by the Home Secretary. The 14 year old boy was sent to a remand home.

The Herts. Ad of the 20th February 1926 (a year after the crime) reported the Harpenden Urban District Council ‘have twice strongly protested against the presence in the village of the St. Vincent de Paul Hostel, where young offenders on probation from London Police Courts are accommodated’, but ‘the Home Secretary has intimated that he sees no reason why the Hostel should be removed from the district’. The Council’s first protest was made in March 1925, after the murder case, stating the Hostel was ‘unsuitable for the neighbourhood’, but after an Inquiry at the Home Office the Council’s protest went unheeded. Another protest the following September, as a result of other crimes committed in Harpenden by an inmate, resulted in the Home Secretary again dismissing the Council’s concerns. After much discussion the Council reluctantly agreed that at the time of their meeting there was nothing they could do, except perhaps to find some firm evidence that the Hostel was a cause for complaint.

The Herts. Ad of the 20th February 1926 (a year after the crime) reported that

Although Harpenden Urban District Council have twice strongly protested against the presence in the village of the St Vincent de Paul Hostel, where young offenders on probation from London Police Courts are accommodated, the Home Secretary has intimated that he sees no reason why the Hostel should be removed from the district. 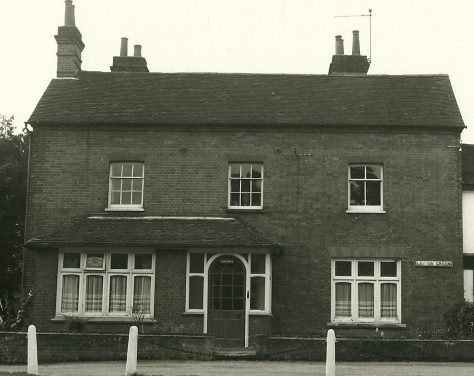 (It was in Leyton House, on Leyton Green)

The Council’s first protest was made in March of last year, when three youths escaped and made their way to Wolverhampton, where two were concerned in the murder of a policeman.  The Council then urged that the Hostel was “unsuitable for the neighbourhood” and an Inquiry was held by the Home Office, with the result that the Council’s protest went unheeded.  Recently some more youths absconded from the Hostel and stole various articles in Harpenden.  They were arrested and convicted.

Dated September 3rd, the letter from the Home Secretary’s Department, which was read at a meeting of the Council on Monday, was as follows:-

“With reference to your letter of 13th July regarding the St Vincent de Paul Hostel at Harpenden, I am directed by the Secretary of State to say that he has had before him a report from the Chief Inspector of the Children’s Branch, who formed the opinion that the boy Victor Ford, who has since been sent to a Reformatory School, was responsible for the outbreak of which the Council complain.  He has also been in communication with the magistrate who placed Ford on probation and he is informed that there was no suggestion of any previous conviction or grave misbehaviour, nor was it suggested at the time that it was a case for more stringent treatment.

The Secretary of State regrets that this occurrence should have taken place, but he understands that the Home has been running without any trouble since the Inquiry 18 months ago, and its relations with the people round about are satisfactory – the Superintendent states that he has had no complaints whatever.  The Secretary of State has no power to order the removal of the Home to other premises and, on the information before him sees no reason to suggest that such action is necessary”.

‘We are the best judges’

” I think the Home Secretary doesn’t know as much as we do or he wouldn’t have written such a letter” said Mr J T Saunders. “I am very much surprised that he has written like this.  I think we are the best judges.  If they knew as much as we do, they would regard the matter in a very different light.  I move that if any further action can be taken, we consider taking it”.

The Chairman (Mr R G Harding) said that in view of the letter he did not think the Council could do any more at the moment, although it was the second occasion on which they had complained of the Hostel.  However, should there be any reason for complaint in the future, they could again take steps to bring the matter before somebody else, who would take more notice of the Council’s objections.

Mr Saunders said he wondered if something could be done through the Chief Constable of the county, as perhaps, representation to him might bring a more satisfactory reply.  The police were naturally well aware of the danger of the place and the menace it constituted to the people of Harpenden.

Only one cause for complaint in 18 months

Mr H Otto Thomas said that the whole question was one of evidence.  The Home Secretary said he had no evidence that the Home was unsatisfactory and the Superintendent stated that he had received no complaints.  The Home Secretary said that, after the Inquiry, he did not consider there was any need to take action.  If the Council was led to do anything, they should prepare evidence.  It was no use approaching the Chief Constable after the Home Secretary had said he was not taking action.  Was it, or was it not , a fact that the Hostel had been so well conducted that there had been only one cause for complaint in 18 months?  It was obvious that the Home Secretary had no feeling one way or the other about that.  “We can only say ‘It is very unkind of you'” added Mr Thomas.

The Chairman: At the moment the matter must remain as it is.  The discussion then ceased.