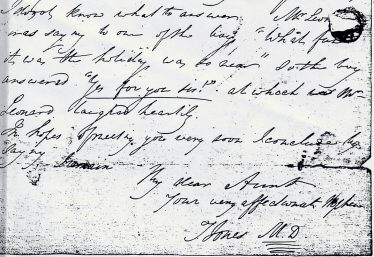 So far the only early school of which we have a pupil’s eye view is the Dissenting Grammar School for Boys, which was opened at Blakesleys (Harpenden Hall) in 1818 by the Reverend Maurice Phillips, Harpenden’s first congregational minister.  A small chapel was attached to the house, attended by the school and some villagers.  Elizabeth Read and her sister, friends of the Phillips family, visited in 1821.  Elizabeth kept a journal, a copy of which was sent to the History Society around 1975 by her grand-daughter Miss Reba Hind-Smith of Bexhill.  Extracts were published in the Society’s Newsletter 8 (1976).

Elizabeth explains that boys who excelled were known as ‘Optimi’ and the less able – and therefore bad boys – as ‘Mali’.  She commented: “I much admire Mr Phillips’ way of reproving: he obliged the offender by his questions to confess himself in the wrong. …. Monday 24 (September).  Mr Philipps had fixed this morning to whip six little boys who were the Mali last week.  Mrs Phillips had them all in the housekeeper’s room, showed them the rod and talked to them a long time of the shocking disgrace it would be. And on their expressing their sorrow and good resolutions, promised to intercede with Mr Phillips for their pardon.  Accordingly we all went into the study and found Mr Phillips whom we at last persuaded to suspend their punishment on condition we would do all in our power to secure their good behaviour.”

She describes the Optimi playing cricket on the common, with Mr Cecil and Mr Leonard (who later became headmaster) “joining in their games with great spirit and pleasure”.  She and her sister took a Saturday walk “with five of the Optimi, into Mr Lawes’ park … our companions were employed in gathering nuts and blackberries. … I was struck with their kindness to each other; they are like brothers”.

A pupil’s take on Mr Leonard

We also have in our archives a copy of a letter written on 15 May 1826  from a pupil, Thomas Jones aged 15, to his aunt in Wales, particularly describing the headmaster, Rev Solomon Leonard – and how much he was looking forward to the holidays!

“Mr Leonard has been to Worcester to see his much beloved Emily (for that is the name of his intended wife).  I understand that she has a pretty face of her own and pretty fair in the money way, he is to lead her to Hymen’s sacred altar next holidays.  Mr Leonard was in a very bad humour when he returned.  I am afraid he will be quite lovesick before long and must again go and see her; he favours her brother very much (he is here at school) he gives him a glass of wine every day.  I am sure he wishes the holidays to come with as great eagerness as we do if not a great deal more.   …  Mr Leonard was saying to one of the boys ‘What fun it was the holiday was so near’ so this boy answered ‘Yes, for you sir!’ at which Mr Leonard laughed heartily.”

By Rosemary Ross, with extracts from History Society Newsletter 8 (1976)