In the light of the decision to convert the former Victoria Road Schools for a Free School – Harpenden Academy – in 2014 this description of the inadequacies of the site makes interesting reading. References to the priority of spending on education in times of austerity in the 1930s also resonate in 2018. Although the decision was delayed, the school did move to the Manland site – with both primary and secondary schools opening in 1939, at a time when they also admitted evacuee children from London. 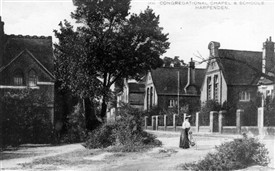 In order to exonerate themselves from any responsibility for the decision of the County Council to shelve the proposals for bringing about an improvement in the school conditions of Harpenden, the Harpenden School Managers, on Tuesday, handed to the press a copy of the report, which they had sent to the County Council, asking for a new school.

The report reveals the totally inadequate condition of the existing County Council schools and makes a strong appeal for the erection of modern premises.

The Clerk read a letter from the County Council, which stated that the body had decided to defer the building of the proposed new school at Harpenden “in view of the urgent need for economy”.

Mr F.N. Gingell said they all agreed that economy was most important, but it did not affect Harpenden’s taxes one iota. They still paid, and paid heavily. He noticed that, only last week, a tender of £21,000 was accepted for a new school at Little Grove. “The County Council evidently think Harpenden doesn’t know its own mind”, said Mr Gingell. “I certainly think that the report drawn up by members of this Committee and forwarded to the County Council should be put in the hands of the public to show that we have done our duty”.

Mr C.F. Putterill seconded. “We ought to let it be known that our desire is that education in Harpenden shall not suffer” he said. “It really does seem that there is a need for economy, but economy in education is one of the silliest notions it is possible to take up at the present time”.

The Chairman (Mr H.O. Williams): I think we should let the public know that, but for the suggestion – an unfortunate one in my view – of an alternative site, in all probability this scheme would have been passed and would have been in hand by now.

Mr Gingell: We have lost another teacher in the middle of the night-school season through the terrible accommodation she has had to put up with. It seems that all the time we are kicking against a brick wall.

“The existing County Council school buildings in Harpenden” states the Managers’ report “are quite unsuited to present-day requirements, both as regards classrooms and playground accommodation, and in respect of their hygienic equipment. Their position also – close to a main-line railway – renders the work of teaching difficult in the extreme owing to the constant noise of heavy traffic. At the Upper School, the minimum number of scholars expected in September 1931 was 328, a number greatly in excess of the effective accommodation and which will necessitate a condition of overcrowding. Prospectively, the total in the near future will be much higher. There is an insufficient number of classrooms. There are, in all, nine of these, including the science room. This latter, which is really unsuitable for other purposes, has to be in constant use. “Since the re-organisation of the school, the staff, which numbers nine, specialise in subject work, and this increases the difficulty, as either the teacher or the scholars must change from room to room. When classes are sectionised, as is frequently necessary, scholars must be taken either under the shed outside or into the store-room. The store-room, which measures fifteen feet by thirteen and a half feet, and has been regularly used for classes of over two dozen pupils during the past six months, also serves as board room, teachers’ room, medical examination room, etc. It is quite unsuited to teaching purposes.

“Many of the classrooms are very inconvenient. Two of them serve as passages to three farther rooms, which have no other means of access. This constitutes a constant source of distraction and disturbance. The ventilation of certain rooms leaves much to be desired. 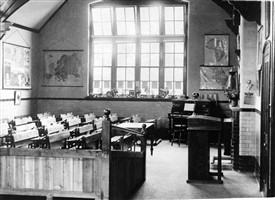 “The manual room is very small and overcrowded and there is no room for the teaching of metal work. The domestic room is small, and certain branches of domestic work cannot, therefore, be undertaken. This is unfortunate, as pupils are thus prevented from obtaining certain certificates in this department of work.

“The particular drawback to both the manual and cookery centres is their close proximity to the railway line and the deafening noise made by the frequently passing trains. Some idea of the conditions under which both teachers and pupils work in these departments may be gained if it is realised that the express down rails are within eighteen feet of the walls of the building. The vibration has already seriously affected the walls”.(1)

“Owing to the absence of the customary hall, in which the pupils can be gathered together, it is difficult to secure a corporate spirit. Also, any talk or notice which has to be given to the whole school must be repeated by the headmaster in nine different classrooms, involving an unnecessary expenditure of time and energy.

“There is no suitable accommodation for physical training. At present the Vaughan Hall, which is small and unsuitable for some purposes, is hired for certain stated times, eight hours in all, and used by senior scholars.(2) The playground, owing to its slope, is unsatisfactory and dangerous for the purpose, and, owing to the proximity of the railway, the strain on the teacher is great. In wet weather, the sheds are not large enough to accommodate the scholars.

“The lavatories, though improved in construction a few years ago, are entirely inadequate for the needs of the children.

“For the 328 scholars expected in September, there are only six W.C.’s for boys and seven W.C.’s for girls, i.e. an average of one for each 25 children. The washbowls average one to 35 boys and one to 51 girls. These figures speak for themselves and need no comment. The fact that the lavatories and wash basins are far removed from each other, the former being situated in the playground and the latter indoors, is not an incentive or encouragement to personal hygiene and cleanliness.

“The cloakrooms are far too small. Although additional pegs have been fixed on main walls, and along corridors, there is still overcrowding, especially in the girls’ cloakroom, and coats have to be placed one on top of another.  This state of affairs is unhygienic and permits of infection under certain conditions. There are no facilities whatever for the drying of children’s’ clothes in wet weather. 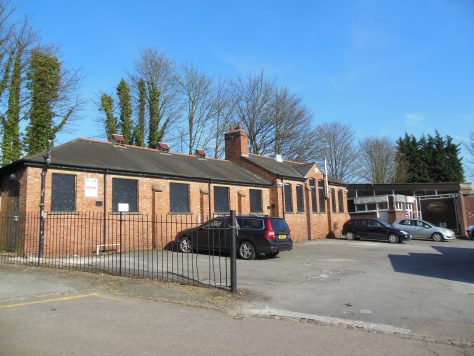 Craft block at the top of the sloping playground – as used by the Further Education Centre 1970s-2000s. Credit: LHS archives, R. Ross 2013

The slope on which the schools are built renders their asphalted playgrounds dangerous, especially in wet and frosty weather. This has been the cause of numerous accidents, the last of which was of a serious nature, not only involving the County Council in payment for damages, but causing permanent partial incapacity to the child concerned. Both playgrounds are small and overcrowded.

“The Lower School consists of two rooms, the larger divided by a moveable partition, making three classrooms in all. The effective accommodation is only 102, but there are now 122 children on the books and the rooms are crowded. The numbers are likely to be much greater in the near future.

“Boys and girls use the same lavatories and there is one W.C. for each twenty children, a number quite insufficient for use during a fifteen minute’s recreation interval. The accommodation is outside the school building, rendering it quite unsuitable for little children in cold and wet weather.

“The slope of the playground renders it particularly dangerous for small children, and games cannot safely be played upon it. Singing games are impossible owing to the noise of passing trains. There are three teachers on the staff; consequently division of the children into more than three classes is impossible. There is great difficulty in teaching on modern individual lines owing to the lack of space for apparatus, and of room for the children to move freely.

“The Managers wish to pay tribute to the loyal and efficient way in which the work has been carried out, under considerable difficulties by all members of the teaching staff. The Managers realise however, that unless conditions are speedily altered, enthusiasm must inevitably wane and efficiency be lessened. It is possible that some of the frequent changes which have taken place in the assistant staff of late years are due to the unsatisfactory and difficult conditions which nullify much of the work and increase tension all round.

“In bringing the foregoing facts to the notice of the members of the Herts County Council Education Committee, the Managers wish to remind them that Harpenden has greatly increased in size and population since the existing schools were built and that it is continuing to grow. In almost every particular it can pride itself on being up to date, yet it possesses one of the most inferior schools, lacking in practically all modern equipment.

“The Managers are not unmindful of the difficulties of the present time and of the necessity for national economy, and they have, therefore, been reluctant hitherto to press as strongly as they would have wished for the necessary improvements. They feel now, however, that there should be no further delay in laying a statement of the facts before those responsible for the education of the children of Hertfordshire.

“The Managers, therefore, strongly urge the Education Committee to investigate the situation as shown by the foregoing statement and to take steps forthwith to provide that suitable accommodation to which Harpenden is entitled, and for which it pays, and thus carry out an undertaking, the fulfilment of which is now long overdue”. 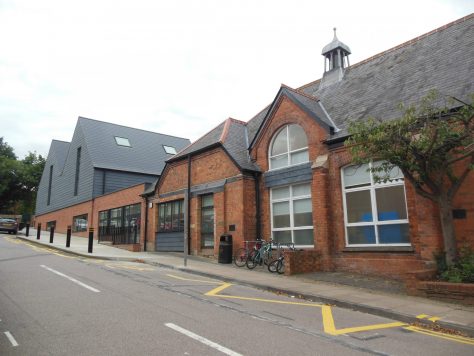 (1) Classrooms for Harpenden Academy, built alongside the mainline railway, have had to be soundproofed at an unknown cost.

(2) Vaughan Hall had a short life from the mid 1920s to the mid 1930s on the north side of Vaughan Road, probably on the access between 1 and 3 Vaughan Road (The Silver Palate, 2018). The Harpenden School of Dancing, run by Miss Gillow, was one of the main users, until they moved to Leyton Hall. 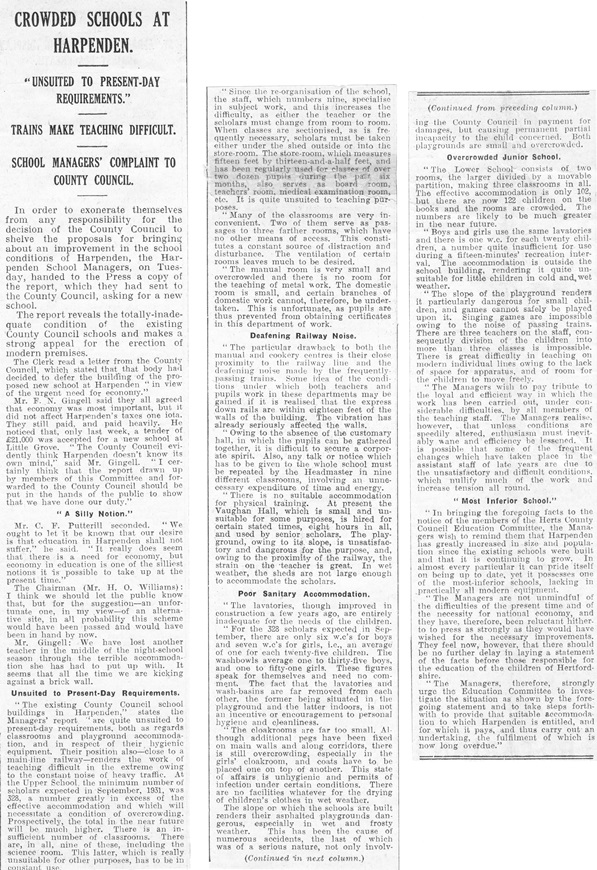 An article in Herts Advertiser, c1931.