You are here: HomenextHarpenden HistorynextTopics - from Archaeology to WartimenextEducationnextFirst schools in HarpendennextHarpenden British Schools: Origin, History and Present Position of the Schools - in 1891

Harpenden British Schools: Origin, History and Present Position of the Schools - in 1891

A paper read by the Honorary Secretary, Lieut.-Colonel Durnford, at a meeting of the Subscribers and Parents of Scholars, held on 18th of December 1891.

The British School was strongly supported by the gentry of Harpenden, from its foundation to its transfer to the County Education Authority in 1894. Col.Durnford was related by marriage to the Lawes family of Rothamsted Manor. This detailed history of the British School before it was transferred to the Harpenden School Board and its new premises in Victoria Road in 1896 shows the very active participation of its governing body, and an interesting forecast of the role of Parent-Teacher Associations. 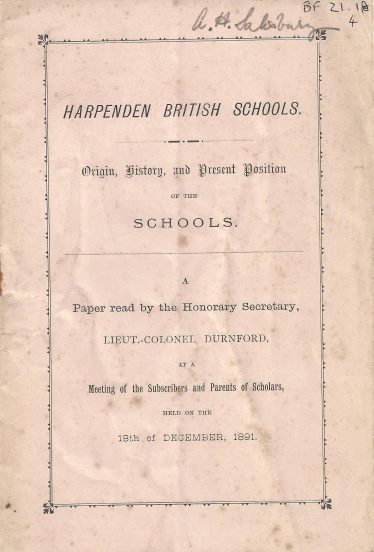 Before the year 1850, the only Schools in this Parish were the small Dame or Plait Schools. The want of efficient schools was recognised by a small body of local gentlemen, of whom two may be called the founders of the British Schools – the late Mr Curtis and the present Sir John Lawes. 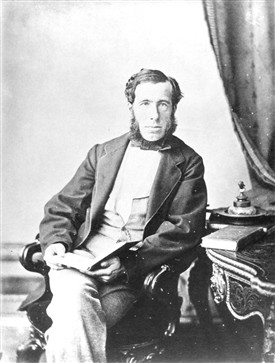 The original Schools were two in number – for the instruction of boys and girls – each consisting of one room, and each capable of containing about 80 scholars. The ground was given by Mr Lawes, and the Schools were erected by subscription, aided by a Government grant of 100 guineas. The Schools commenced work in 1850, the average attendance in the first year being 67 boys and 55 girls.

The School buildings were conveyed by deed to six trustees, of whom Dr Spackman is the sole survivor. This conveyance deed contains certain provisions as to the committee of management and the election of its members, of which we shall have occasion to speak more particularly presently.

In the early days of these Schools the financial position seems to have been largely upheld by Mr Lawes, who appears in the first published report (May 1851) as a donor of upwards of £52, in addition to his subscriptions, and in each subsequent year up to 1863 appear various sums, under the head of “Donations” from £7 to £68.

The first aid received by these Schools from Government appears to have been in the year ending May 1860, when a “Capitation Grant” from the Privy Council was received, but only for the small amount of £9 11s.

The first “Government Grant” earned by the Schools appears in the report of May 1864, when the Boys earned £44 12s. 8d., and the Girls , about half that amount.

There were 97 boys attending the Schools at this period, and only 46 girls.

Growth of the Schools 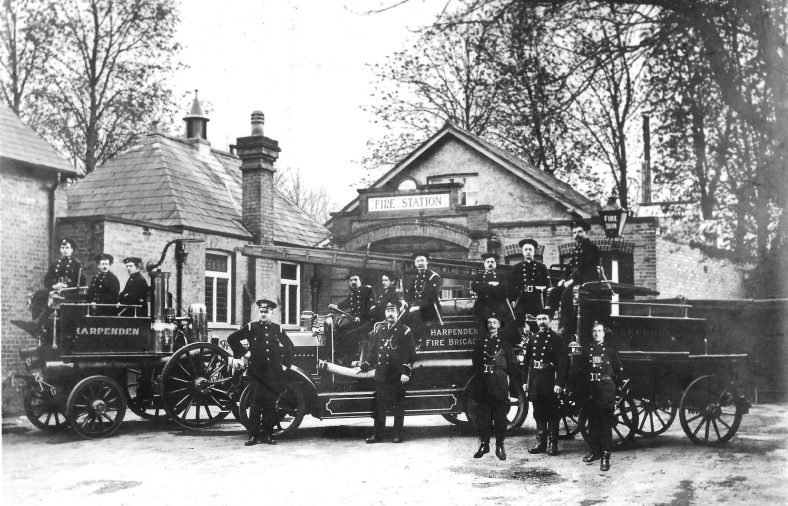 Harpenden Fire Brigade in 1912, standing outside the former Infants School, with the girls’ classroom extension on the left. Credit: LHS archives 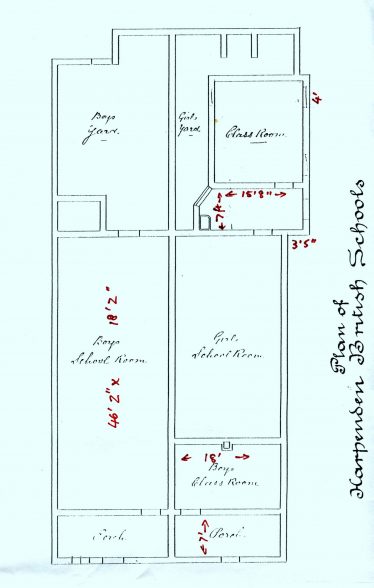 Annotated copy of photocopy of Plan of the Harpenden British Schools. This show the division of the girls’ schoolroom to provide an additional room for the boys, and the 1879 extension at the rear, providing an additional classroom for the girls. Credit: LHS archives

The first enlargement of the original Schools took place in the autumn of 1866, when a part of the Girls’ School was converted into a classroom for the boys; the cost being provided for by special donations.

The report of May 1871 states that “by order of the Privy Council the boys’ school has had to be enlarged so as to admit another group of desks”. This appears to have been done at the cost of Mr Lawes.

There being a demand for yet further school accommodation, an Infant School was built upon the land, and at the expense of Mr Lawes: it remains private property, but is lent to the school managers. The fittings were furnished by the donations of various friends.

This Infant School was opened on the 4th August 1858, and remained an independent school until 1871, when it was amalgamated with the boys’ and girls’ schools, and brought under one management.

A further addition to the schools was found necessary in 1879, when a classroom was added to the Girls’ School. Mr Lawes gave the land required, and he and Mrs Warde supplied the chief part of the sum expended.

We may here note that the original school fees paid by scholars were: boys from 1d. to 1s ; girls 1d. to 6d.; and up to the close of the past school year, 1s.and 6d. have remained the highest fees for boys and girls respectively.

As a consequence of this change, and an alteration in the time of payment of the Government Grant, there was no grant shown in the accounts of the ten months – April 1874, to February 1875 – (the grant earned being carried on to the accounts of the following year); the result was that a balance in hand of £38 odd in 1874 became a deficit of £119 in 1875. After this period the accounts show a serious yearly deficit, until the debt, then amounting to £180, was paid by Mrs Warde in 1887.

A very integral part of the history of the British Schools would be wanting if the parts played by Sir John Lawes and his esteemed sister, the late Mrs Warde, were omitted.

Sir John Lawes’ and Mrs Warde’s Support for the Schools

We have seen how Sir John Lawes was not only an original founder, but the backbone of the Schools – ever ready to supply a deficiency in funds, or to give land and add to the School buildings. 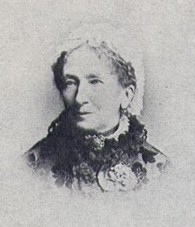 During the early years of the Schools, Mrs Warde was a subscriber and donor of considerable amounts: her annual subscription for many years having been £25. In addition to this, we find that, in the ten years 1878-1887, donations of various sums were made to the School fund, culminating in the gift of £180 in 1887 to extinguish the debt which had oppressed the Schools since the year 1875. The total amount of these donations made by Mrs Warde in the ten years was £420.

But more than money was the priceless work which Mrs Warde did in and for the Schools – always ready with her keen appreciation, ready tact, and genuine benevolence; never tired or weary of what became the work of her life, and truly a labour of love; ever ready to advise, counsel or to help. I may well say, and with heartful sorrow, that we shall ne’er see her like again.

Mrs Warde’s last visit to the Schools was, I believe, on the 8th July 1887. After her health began to fail, she asked me to assist her in the work of the Schools, and I gradually took up from her the thread of the active work; but, to the last, her most lively interest in the Schools, and all belonging to them never failed.

Extracts from the paper on the Schools’ efficiency and financial position

I am prepared to say that the British Schools are, as a whole, not only efficient, but thoroughly good schools. 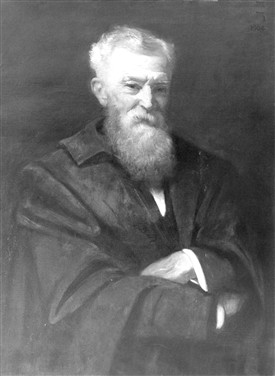 The establishment of the Boys’ School evidently supplied a great want, and the early records are good. There has been no change in the head-mastership for nearly 31 years, and during this long period the annual reports of Her Majesty’s Inspectors of Schools show the highest appreciation of the School and of Mr Henshaw personally.

In the reports are found such remarks as “I have seen few village schools so good as this” (1866); “The high quality of the school work here continues to be remarkable, and reflects great credit upon the master and his staff” (1876).

The Girls’ School […] in its early days it was not appreciated so much as the Boys’ School. Of late years, however, it has come quite to the front, and would have many more scholars if we could only take them in.

The Inspectors’ annual reports [on the Infant School] speak of “good progress”, of the children being “well-taught”, “improving and making satisfactory progress”.

One item of expenditure has of late been considerably increased – that for the teaching staff of the Boys’ School. Pupil-teachers are not to be obtained, and assistant masters must, therefore, be employed, at a cost nearly three times as great.

I am glad to be able to report that the general condition of the School buildings is good; that the sanitary condition is likewise good, and is carefully attended to; and that wholesome water from the waterworks has been laid on to all the Schools.

A good and useful step has lately been taken in the establishment of a School Savings Bank. This was opened with great success, and is an object of much interest to the children. The numbers of depositors in the different Schools are – boys 59; girls 55; infants 60 – total 174; and the amount deposited weekly is about £1 8s.

We, therefore, proposed the following scheme to the parents of the scholars, and which they accepted:- That the school fees paid by boys and girls should be reduced by 2d., and that all materials, except copy and exercise books, should be supplied free; also that the infants should pay a uniform fee of 1d. a week.

Then the school managers invite the parents of the scholars to elect from their own numbers a “Parents’ Committee” of not less than seven, nor more than thirteen members. This committee would form a most useful connecting link between parents and managers, and could render great assistance by its advice, by bringing forward such school matters as might want attention, and by promoting the cordial co-operation of parents, teachers, and managers. 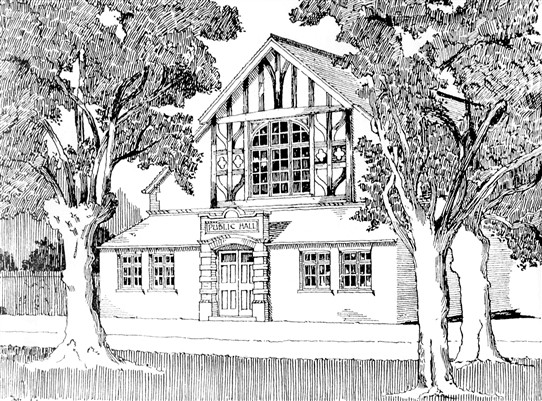 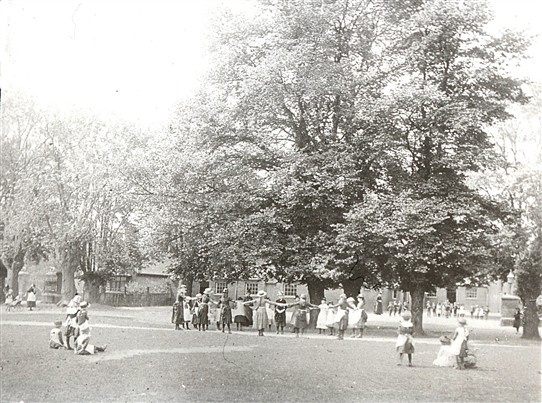 Transcript from a copy which belonged to A.H. Salisbury