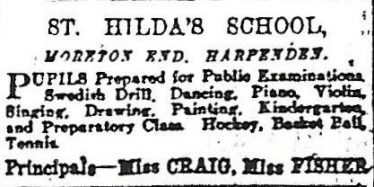 Advert in the Herts Advertiser and St Albans Times

St Hilda’s, a private school for girls, was founded at No.2 Rothamsted Avenue, Harpenden in about 1890.  From there it moved to 28 Douglas Road in the early 1900s, under the headship of Miss Craig. Theodora Wilson refers in her Journals (p.95, p.103, p.113) to her sisters Anna and Rhoda teaching there in the Kindergarten* from 1900, until Anna had to leave to take up home care duties in 1908. 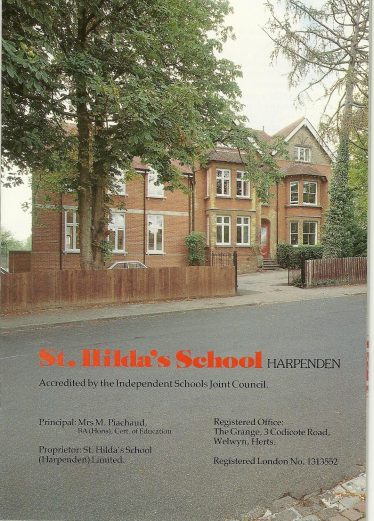 Until about 1939 a number of boarders were accepted, but since then it has been a day school.  It prepared girls for the entrance exam for the Girls’ Public Schools and later for the 11+ Grammar-school qualifying exams. In 1977 the school became a Limited Company, administered by a Board of Directors. 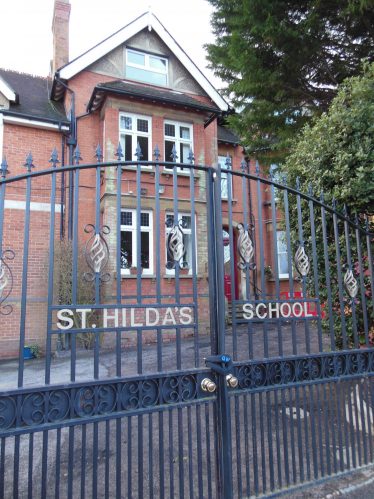 According to a prospectus from about 1990 in the History Society’s archives, the buildings were extended in the 1980s to include a Hall, Science/art room and the Reception classroom. The grounds included gardens, a heated swimming pool and hard tennis/netball court. Further extensions, approved in 2011, are underway in 2013.

* “Anna and Rhoda have been working on steadily at school. At Christmas (1902) they made a new arrangement with Miss Craig, who found that the kindergarten was not paying its way, so our girls agreed to go on teaching as before but receiving only a capitation fee for each child in the lower school. It was a little hard at first and in the summer term, just as Anna had collected a very nice little kindergarten class, it was roughly dissipated by an epidemic of chickenpox. Now however, the school has started with nine new pupils … and children and teachers seem in excellent health and spirits.” (Theodora’s Journals, p.103)