You are here: HomenextHarpenden HistorynextTopics - from Archaeology to WartimenextChildhoodnextSchoolsnextThe Early History of St Nicholas Church of England Primary School 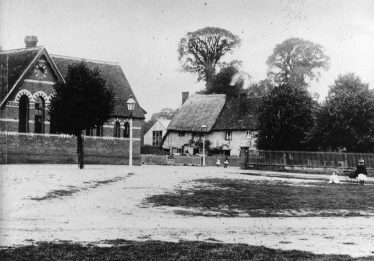 zoom
St Nicholas School, opened 1865 on the site of two cottages: the cottages to the right were church cottages, not part of the school
LHS collection 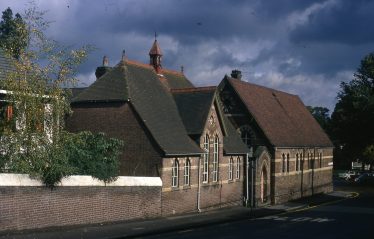 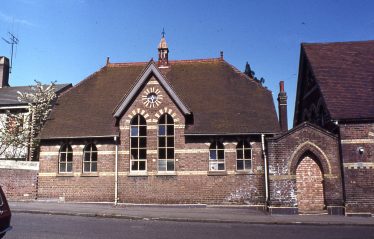 The British School, which later became the Council School in Victoria Road and eventually Manland School, was opened in 1850 on the side of the old Fire Station near the entrance to Rothamsted Park

St Nicholas School was not founded until 1859.  It was known as the National School, short for the National Society for promoting the Education of the Poor in the Principles of the Established Church.

Before these two schools were started there was only a private school run by a Mr & Mrs Whitehouse in a cottage near church green.  The so-called ‘plaiting’ schools were really workshops with little provision for teaching.

The National School was first opened in a pair of white thatched cottages, on the site of the present school that had been used for many years as a Sunday School.

According to Kelly’s directory it was run by Mr John Gilbert, master; Mrs S Gilbert, mistress and Ann Grey infant’s teacher.  However by the time the log book was introduced in 1863 the school was run solely by Miss Jane Gray.  Probably the name in Kelly’s had been mis-spelt as there is an entry in the 1861 census of a Miss Jane Gray, aged 21 years who was a boarder at a house in Sun Lane with her occupation recorded as National Schoolteacher.

In May 1864 a Catherine Matthews was assistant teacher under Miss Gray, but she left the following September and Miss Gray had only unnamed pupil teachers and monitors helping her until she herself left in December 1868.  A Miss Charlotte Jones then took over the school with a pupil teacher.

The cottages must have been inadequate for their task.  Part of the roof blew off in December 1863.  The following July the school was transferred to the club room at the back of the Red Lion (later became Rolt’s cycle shop in the High Street).  The cottages were pulled down and the new school was opened on the same site on 2nd January 1865.  It consisted of the main room, which is the present hall and the classroom that leads onto the stage which was used for Infants.

During its early years the school had an average attendance of about 60 children.  By 1870 this had risen to over 100.  By December 1882 the average attendance was given as 154 out of 205 children recorded on the books.  About a quarter of the children were under 6 (Infants), a half between 6 and 9 years old (Standards I –III) and the remaining quarter over 9 (Standards IV- VII).

To be eligible for grants each child had to attend more than 200 mornings or afternoons in the year and for the full grant those of 6 and over had to pass examinations in reading, writing and arithmetic when the Inspector paid his annual visit.  Each year the child had to sit for the exams at the next higher standard whether they passed or failed.

The children had six weeks holiday a year.  The first week was at Easter when late or Whitsun when early, the next four weeks varied according to weather and started when the local farmers were ready to gather in the harvest, and the last week was for Christmas.