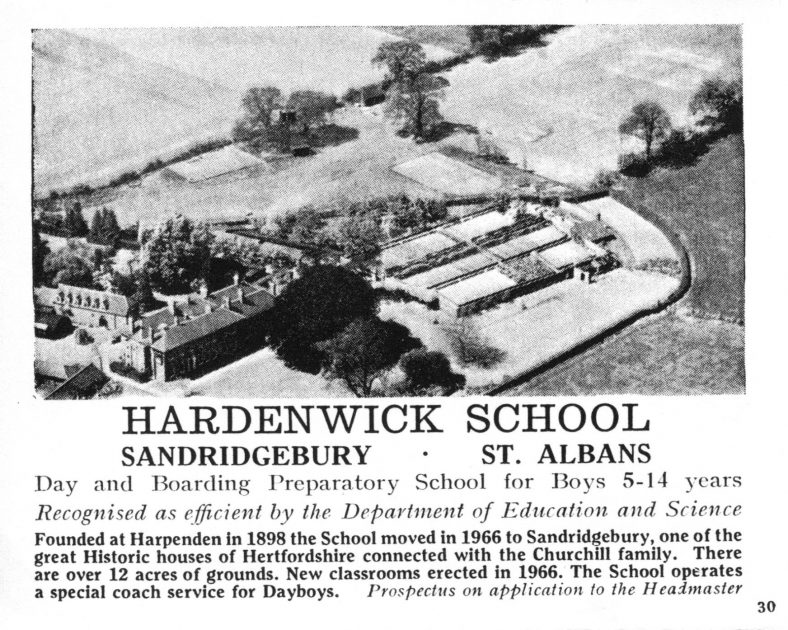 Advertisement for Hardenwick School after it had moved to Sandridgebury. Credit: LHS archives

Charles Habib submitted this piece as a comment on Hardenwick School, but the editors felt it was worth starting a new page for the new, though short-lived period the school was based at Sandridgebury. 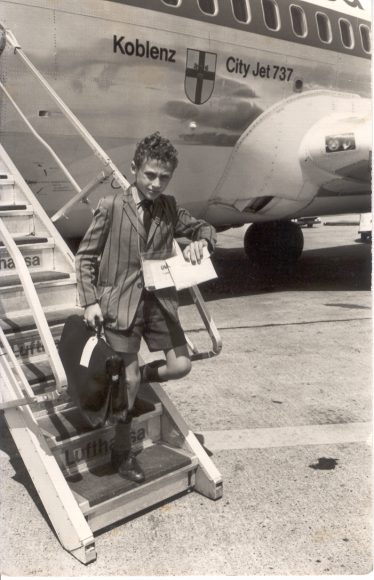 Charles – arriving at London airport, to be met by a ‘Universal Aunt’ who escorted him back to school. Credit: Charles Habib

It seemed extremely unlikely that after almost fifty years I would find Hardenwick veterans and be able to share the memories of my very first Prep School, which I entered in 1967 at the age of seven, until it closed between 1970 and 1971. Until now, I wasn’t even aware that there had been a former Hardenwick before 1966. I was browsing through Google Maps, looking for Sandridgebury and found this Website. To answer the question as to why it shut down my guess is that it was probably too small to run economically. There certainly was no incident of child molestation. With only 50-odd boarders we were such a close-knit society that I’m certain word would have spread amongst us long before any resulting consequences, and there were no rumours of that nature.

The School had its own heraldry, so to speak. It was a five-pointed star with a phrase in Latin beneath. The plates and dishes also had them. “Fortiter et Recte”. Once when in St. Albans, wearing our caps with the star and slogan an elderly man approached me and asked “Are you Russians?” I had no idea what he meant. There was also another slogan I believe which read “Play the Game”.

The master I remember most vividly is Mr. Harris. “Don’t behave like a sub man” was his standard phrase when irritated, “sub man” – that was his favourite. And he was a slipper man, as someone has already mentioned, not cane – and he didn’t hit hard, not in my time at least. One surreal scene, which I’ll never forget, was when he caught Daniel, a Kenyan, and me out of bed after lights-out – dressing gown on – downstairs. Daniel, was new to corporal punishment and when Harris, holding the slipper, ordered him to bend over he kept standing up every time Harris raised his arm. Harris, totally frustrated, grabbed Daniel by the elbow and the whole scene culminated in Daniel screaming and running in circles, while Harris, turning with him, kept trying to hit him on the backside with the slipper, missing, and shouting “Stand still, Stand still!!” – all the while poor Daniel screaming and hopping, until Harris finally gave up. Now someone from today’s generation would think “how horrific.” But it wasn’t, it was simply surreal, and bottom line, almost normal. I liked Harris – I was never afraid of him. For some reason he decided to teach me chess when I was about nine and would occasionally ask me to play against him in the library. I felt quite flattered. I remember that whenever I made a good move he would glare at the board, screw up his eyes and curse under his breath while I would have to try my hardest not to laugh. Luckily I think he always won in the end and I was glad he did. It just didn’t seem right to win against him. Harris was also in charge of the tuck shop. He painstakingly made sure that everyone had an equal and well measured share of tuck. It was only twice a week I think.

On Sundays after breakfast it was shoe-shining time. We would all run down into the cellar and we learnt how to polish shoes properly. Some were real experts. After that it was church going time, down a long, narrow lane “Single File, Single File” he kept repeating. Then it was letter-writing time. Harris actually read through every letter before sealing it. Once you had finished the letter to your parents you would go up front, hand it to him, and sometimes he would give it back and tell you to write something else. We never questioned it. Harris also taught me carpentry and would drop anecdotes of the brutalities of Japanese torture during the war. And, by the way “The German was the world’s best soldier.” What? I thought to myself. It made me feel proud of my German origin. He had a golden retriever called Brynn. Going for long walks in that beautiful countryside with, of course, Brynn, picking raspberries in the woods on the way – looking back – a happy time and age. We were always out-of-doors it seems, and never bored. The grounds around the main building were so very extensive that we spent all our free time outside playing war, soccer, high-jumping or cricket.

… and of ‘Yogi’ Evington

The Summer terms are the ones I remember best. Evington, or Yogi, as we used to call him, we only saw in the assemblies after breakfast. He was gone for the rest of the day and I can’t recollect him ever teaching me. His wife I never saw. Maybe she had already died. None of the boys were fond of him. But he no longer caned. In fact the swish was hardly ever used at all. But if he caught you out of bed after lights-out he would make you stand in the dark corridor downstairs, facing the wall, for three hours at a stretch, every half hour walk past you, silently puffing his pipe – he wouldn’t utter a word.

I was fairly chubby before Hardenwick and became so skinny that my father was quite shocked when he first saw me. “Well, we’re not fattening the boys” was what he answered to my father’s complaint, and that was that. My father took it with humour because it was clear that I was in the best of health and vitality. Nobody was ever seriously ill. The food was tasteless, always scarce, but nourishing. Except on Sundays when we were served a marvellous steak and kidney pie which I haven’t eaten the like of since. But, in Hardenwick, the seniors were the first to get second helpings. It took a couple of years before I got one.

For foreigners like me, thrown into the British private school system with barely more than pigeon English and no knowledge at all of the hierarchy and rules the first couple of terms were extremely tough. Hardenwick was at that time still like Tom Brown’s Schooldays. But the education was excellent and my next prep school, after Hardenwick closed in 70/71, was a walkover for me. I had learnt everything I needed, socially and academically, to feel perfectly at ease.

From there I moved on to College and University. There are many faces and some names that I remember. If anyone between 1967 and 71 reads this and remembers me I would be happy to hear from them. Today I live in Germany, as I have for the most part of the last 30 years. I only rarely visit Britain. I hardly ever speak English today. Finding this website has dug up something deep inside, long forgotten and yet surprisingly so vivid. Hardenwick, Sandridgebury, my soul that is essentially so English. And to round it off, my message to Brian Haigh, who wrote the introduction “Memories of my time there from 1947-51”. You remembered the the grace before the meal which I had forgotten – it took me about an hour of hard thinking to remember the after-meal grace properly. Gratias benedic domine agimus, pro his et beneficiis, omnibus tuis. 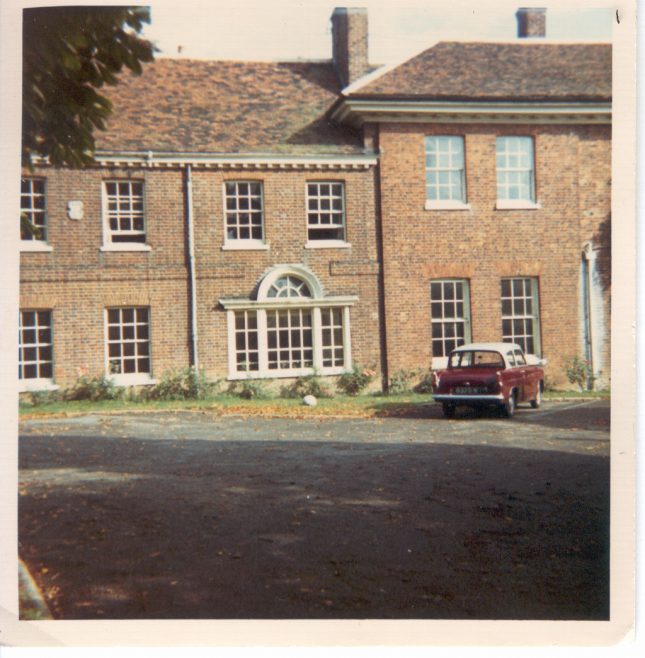 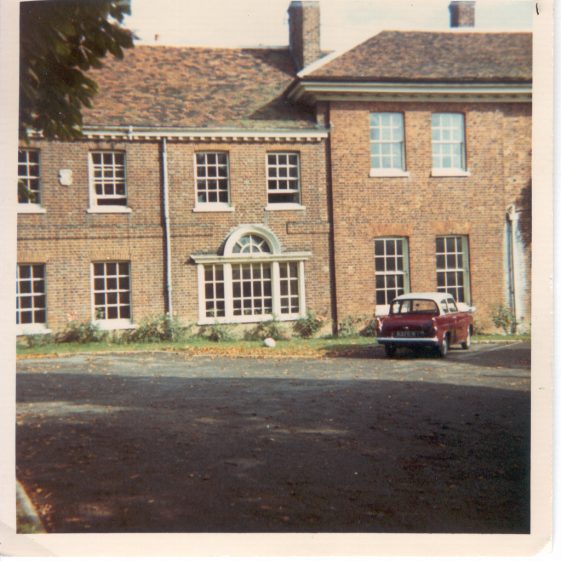 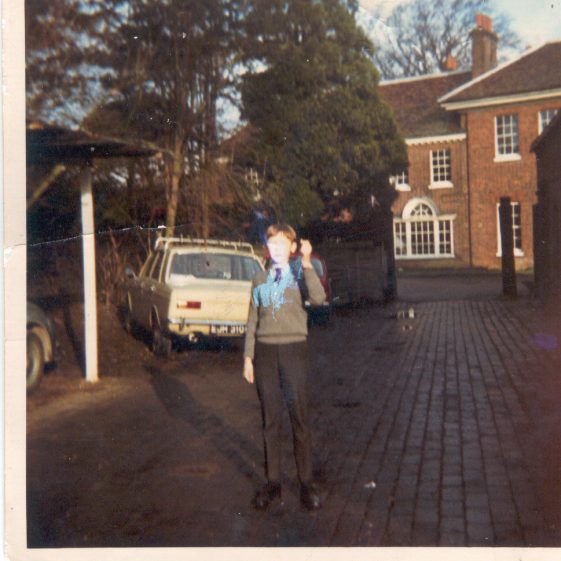 Townsend in the school drive. ed. Who threw the paint?
Charles Habib 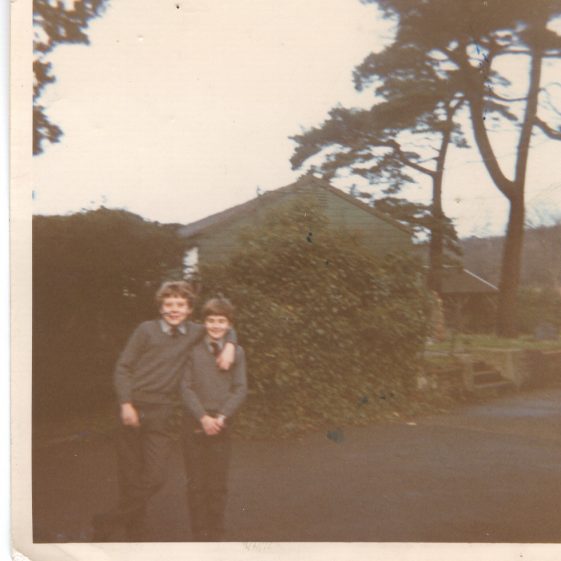 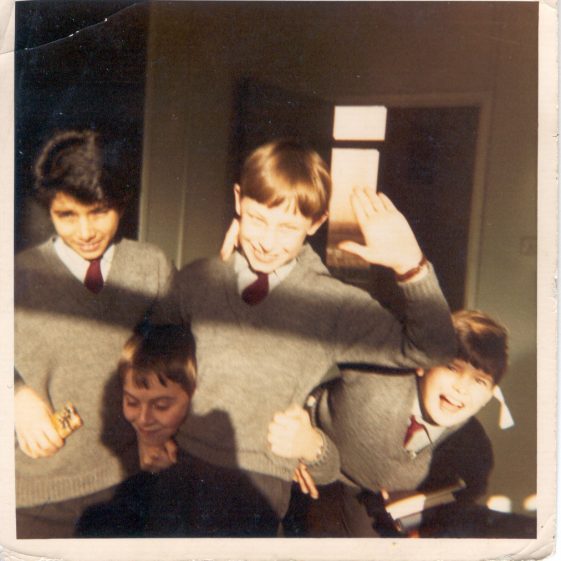 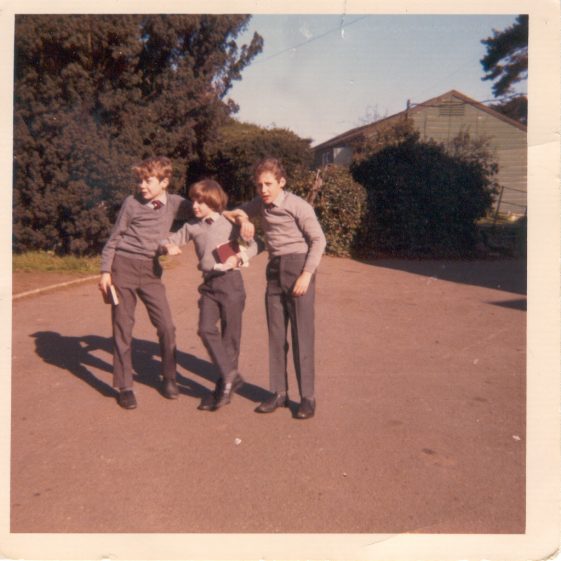 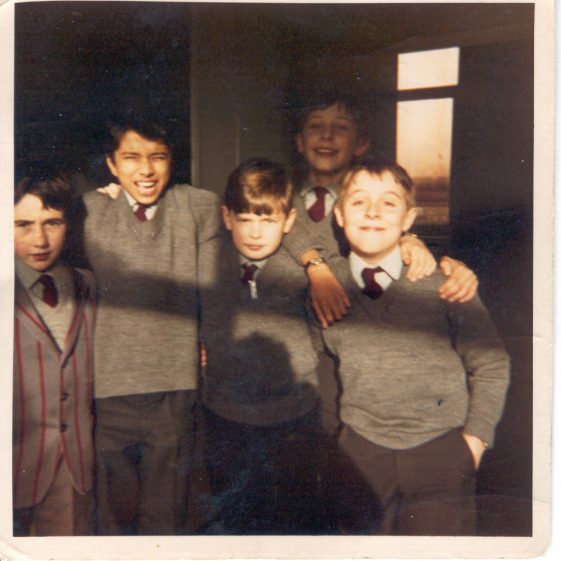