Compiled from the prospectus and notes in our archives

Prompted by Comments on Harpenden Cinemas left by ‘old boys’ of Moreton End School, we searched our archives (BF.21A).  See also John Wyborn’s account of the school in wartime.

Please note the editors’ advice on submitting Comments. printed at the foot of the page 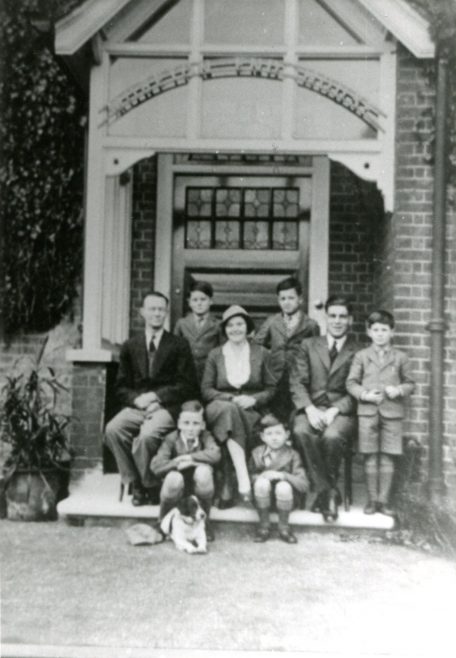 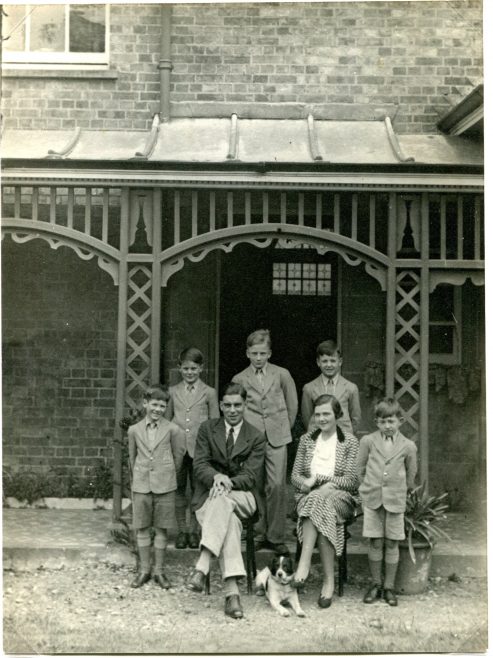 The first pupils – marked 1935, but likely to be 1933 – with John Ryck Wolfe Lydekker in the middle of the back row. Credit: Mr Best, Dalkeith Road 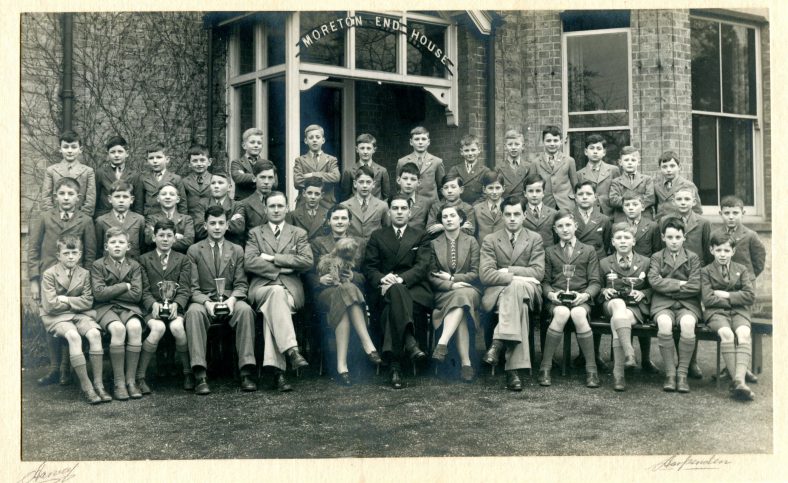 Moreton End School opened in September 1933 in a large Victorian semi-detached house at 53 Luton Road, Harpenden. The first headmaster, Mr Victor Edward Hubert Card, had previously been a Maths teacher at Hardenwick School. For the first term there were five boys – Randall, [John] Lydekker, Faulkner Lee, Perkins and one other. The staff consisted of Mr Card and his wife Vera, who took on the role of Matron, and one male and one female teacher. 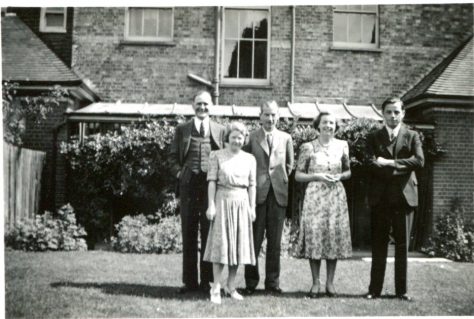 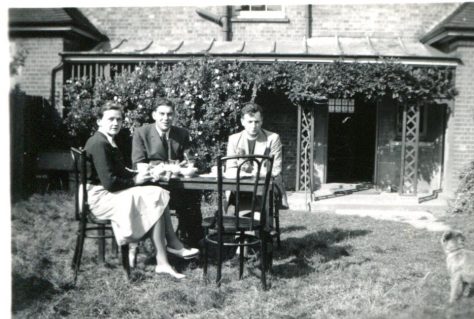 In the 1930s the average number of pupils was 36, including six boarders. Over 10% later qualified as doctors. In the period 1950-73, under Mr Billington’s headship the number of pupils rose to 85. Girls were first admitted from September 1978, but only up to the age of 7.

Term-time always began with “The Parable of the Talents”. This would link to the Cup inscribed “TO HIM THAT OVERCOMETH”, which was presented annually on Sports Day. One recipient of this cup was Michael Hawkes, who was very nervous, almost afraid of games, but who later became a Cambridge rowing Blue.

Visiting speakers included the Sacristan of Westminster Abbey who told the pupils about preparations for the 1937 coronation; and a deep sea diver in his complete outfit, with underwater cutting tools, which he demonstrated in a large water-filled biscuit tin. The Headmaster’s wife spent two hours afterwards mopping up the water.

There were visits to the Morris car factory (which they compared unfavourably with the methods used at Vauxhalls), to a local hat factory and printing works, and to Chatham Dockyard in 1939, with special permission from the Admiralty, since the fleet was preparing for war. 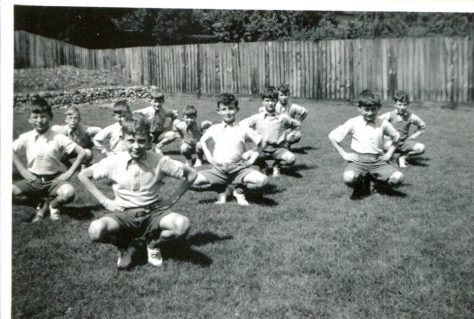 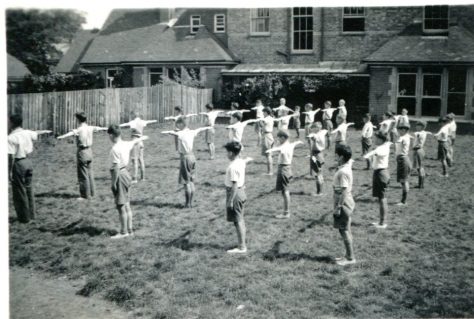 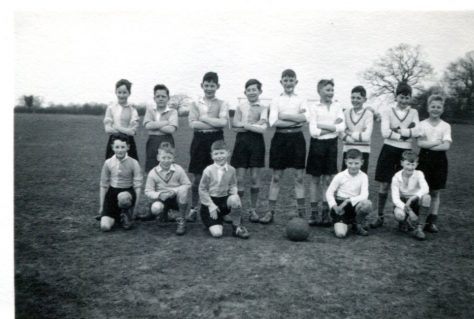 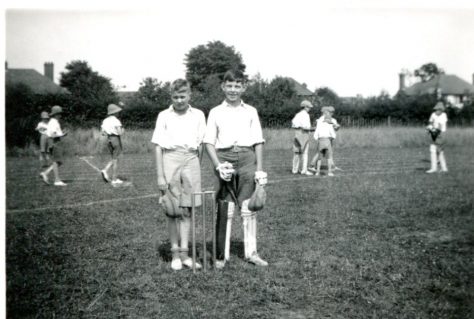 Sports included boxing, which took place once a week in the Badminton Hall in a nearby field, which was also used for the school fireworks. The Badminton Hall burned down during the second world war. Soccer and cricket were played on the school’s sports field (now occupied by Roundwood Park School). The boys changed in the school cellar before walking up Moreton End Lane. 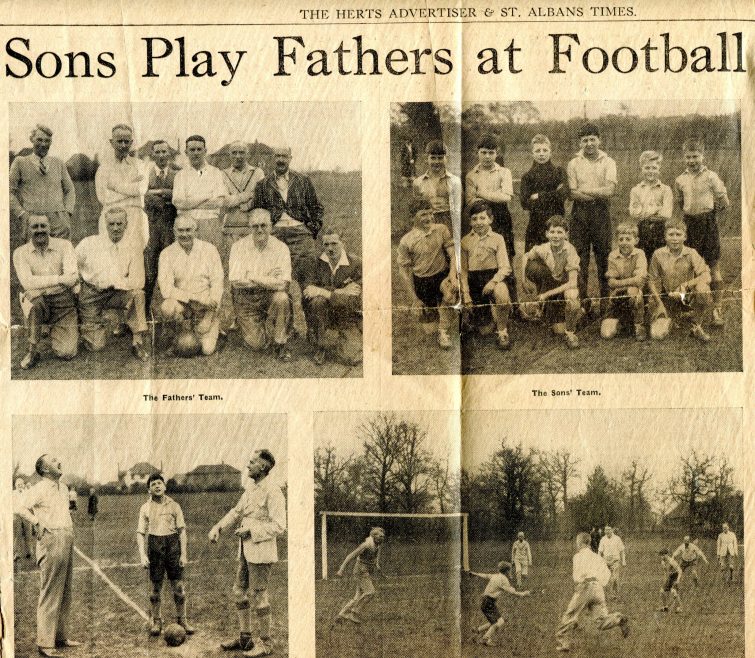 After the annual sports day in the summer, parents and boys returned to the school for the presentation of prizes on the lawn, and tea provided by Mrs Card. On wet days, when it was too inclement for sports, there would be a lecture in the front ground floor room with an early epidiascope. The sheet used for the projection screen was a linen bed sheet dated 1874.

School plays were also a feature of pre-war Morton End and were sometimes performed at Rothamsted Manor. 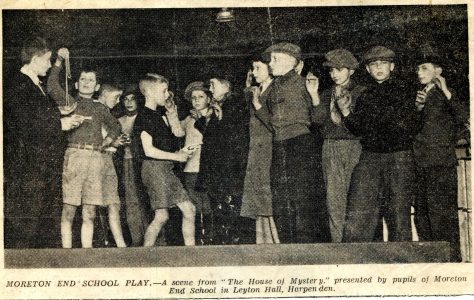 Note * John Ryck Wolfe Lydekker (known in the family as Ryck) was the son of John Lydekker who died in 1946 having never recovered from Ryck’s death. His sister Jane, in Australia, recalls the family’s grief when Ryck drowned whilst trying to save his Ship’s Captain’s dog after being torpedoed in 1943.  He is honoured on the Harpenden War Memorial and in St Nicholas Church.

Ralph Webster, in “It Started with a Green Line Bus” (The Book Castle, 2003), devoted a chapter to Life at Moreton End School. He listed the approximate dates of the headmasters: 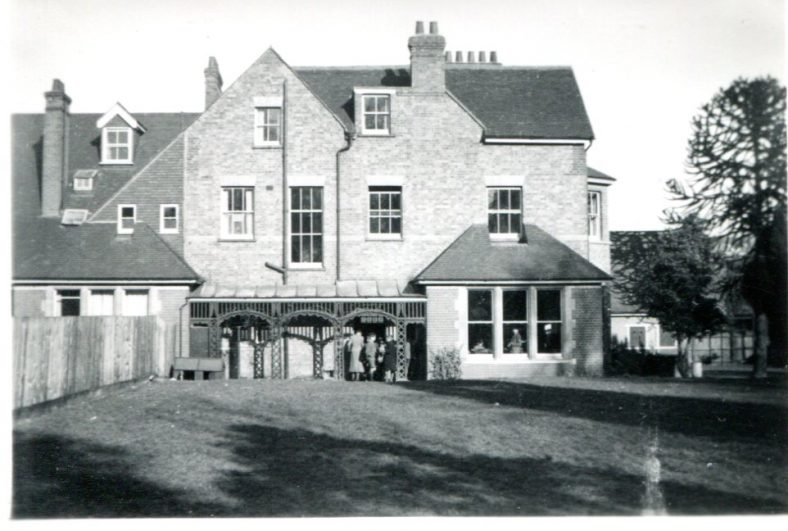 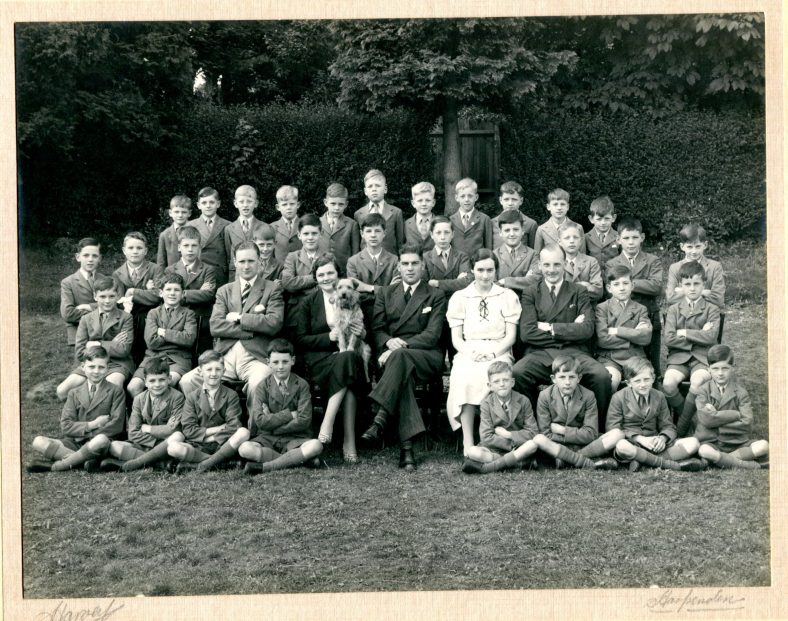 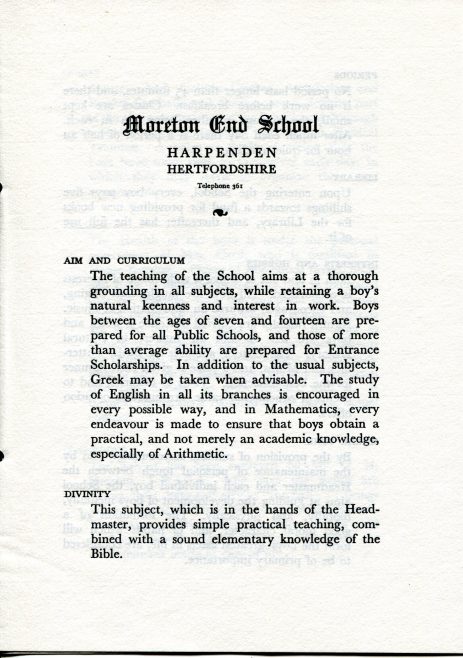 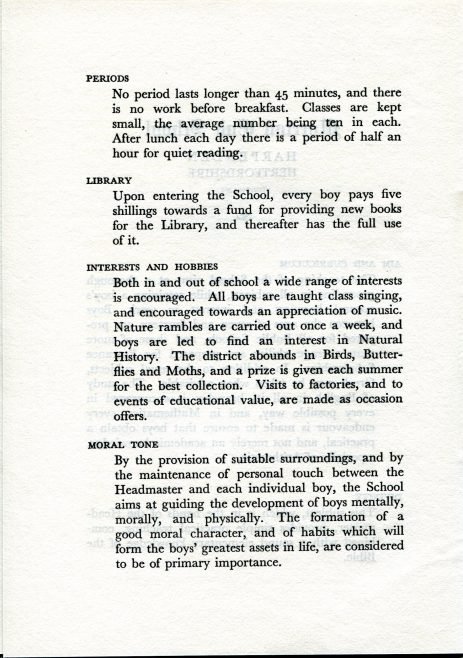 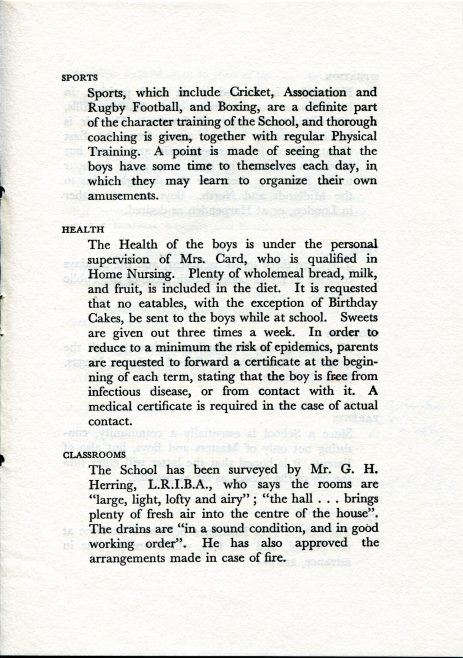 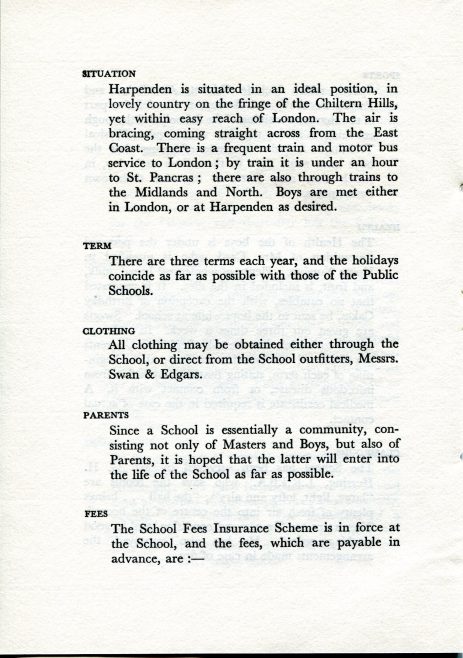 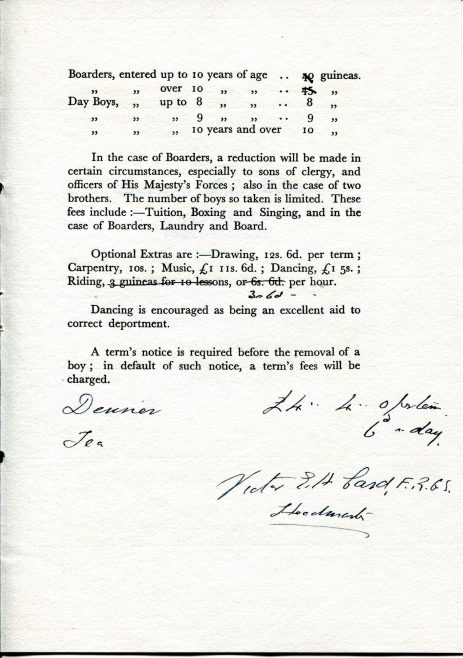 Moreton End school photo, c.1946. The bank behind the group on which flowers are growing was actually an old WWII air-raid shelter. Credit: scan sent by Peter Ford

PLEASE NOTE
The editors are well aware, and it is public knowledge, of the cruel and unpleasant actions of some of the staff at Morton End School over a number of years but we feel that that has now been adequately covered by the comments published above. We are of course very sorry for the hurt pupils suffered both physically and mentally but this is a Local History website and we will not therefore be publishing any more comments on this aspect of the school and hope that ex pupils can get help in more appropriate ways to overcome the trauma that you obviously still suffer.

We are of course happy to consider other historically interesting information or queries.