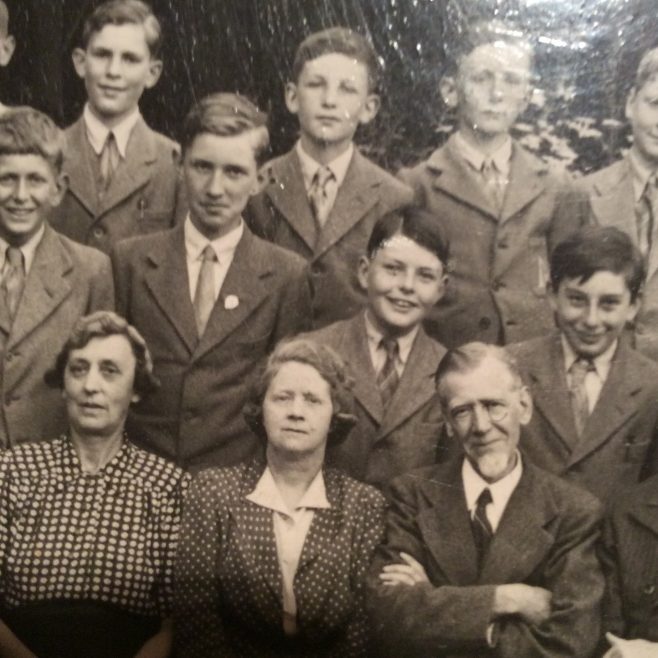 The story of Moreton End School in the war years is a poignant one. Mr and Mr O’Hara took over the School in 1939, coming from another prep. school called Rodney House near Gosport where they had been happy. With the war becoming imminent the Royal Navy requisitioned the school along with other buildings on the south coast. Moreton End School was for sale, and so Mr O’Hara bought it. He arrived in Harpenden a week before war was declared, with his wife and two children packed into an Austin Seven. His first wife had died in 1936 and shortly after arrival Mr O’Hara himself became ill with cancer. Those of us at the School in 1941 remember him at the beginning of the autumn term taking morning assemblies looking pale and gaunt. Later he became very poorly and he died sometime in November. We saw his wife Enid briefly on the day of the funeral, in deepest black.

This left Enid O’Hara with a formidable problem: how to run a boys school in wartime and how also to provide for her own future and for that of her late husband’s two children by his former wife, Terence and Meriel, who were now fully orphaned. Unhesitatingly she took all this on, but it could not have been easy for her, nor for them. Meriel was a pupil at St Albans High School, and Terence was away boarding at Kings School Bruton where he had won a scholarship.

In what seems an astonishingly short time she found the ideal headmaster. Mr Ernest Edward Codrington not only looked like a headmaster, he dressed like one, sounded like one and indeed was a very good one, by the standards of those times. With a goatee beard and a cloak and homburg hat, he reminded one either of Dr C E M Joad, the BBC Brains Trust guru, or else Guy Fawkes according to one’s inclinations. There must have been difficulties but the two seemed soon to be working as a team. Mr Codrington ran the teaching, the discipline, and the ‘public face’ of the school. Mrs O’Hara did practically everything else. She was housekeeper, matron to the boarders, grounds-woman of the Roundwood Park sports field, and – as Codrington was a salaried headmaster – she was probably bursar and finance manager as well. A tiny energetic figure often pedalling a large bicycle with a wicker basket, she was to be seen on the sports field wrestling with a heavy duty motor mower nearly as large as herself, ensuring that we could all play cricket and football at the due times. She also grappled with severe deafness which distorted her speech a little.

Meanwhile ‘Old Codfish’ as we called him, demonstrated that he was no ordinary headmaster. Living modestly in a bungalow in Boxmoor, with a rather self-effacing wife much younger than himself, (to whom he would refer protectively as ‘the dear little soul’ if you were adult and knew him very well), he would travel each day on the Nicky Line and walk down the lane to the school. In Harpenden he came into his own. The school flourished under him, doubling in size. In 1939 there were 37 boys. The 1946 photo shows 74. He became a familiar figure in the town often attending lectures and speaking at debates in the Public Halls, or else occasionally writing to the papers on subjects of concern. A large air raid shelter had to be built at the school, and later two wooden pre-fab classrooms in the grounds at the rear to accommodate the expansion, during his period as Head. A strict disciplinarian, who would not hesitate to cane a boy in public if he felt the need, Old Cod was nonetheless kindly and concerning for those he felt deserved it, and would follow our progress long after we had left. An inspired teacher in his own right he would invite us to compare the gravel path that was Moreton End Lane on a wet day, with the geography of the Mississippi. It had tributaries, rapids, meandering courses, and a huge delta of mud at the bottom of the lane where it entered the gutters into the main road outside the School. He would mark our homework with comments in red ink and a monogram of his initials E.E.C. with a squiggle that looked like a puff of smoke. We would try to imitate it on our blotters when he wasn’t around.

Yet life was tough with rationing and other privations. In the severe winter of 1946/7 there were power cuts. The inkwells froze and everyone got chilblains. Not surprisingly the time came for Enid O’Hara to consider retirement. Business analysts will readily appreciate what was to follow. She needed to sell the school for its true value, to provide for her own retirement and the future of her two step-children. Mr Codrington felt with justification that a large part of its enhanced value was due to his own efforts. Inevitably they could not agree on terms and there had to be a parting. Regrettably there was some acrimony and even anger on the part of a few parents, for whom Codrington was Moreton End School.

Mrs O’Hara eventually retired to a small cottage in Long Crendon. Mr Codrington became headmaster of Barnfield, a much larger prep. school in West Wickham before retiring to the South Coast. Everyone thought Enid O’Hara was Irish because of her surname. But although Mr O’Hara and his first wife came from Southern Ireland, Enid was brought up in South Wales, the eldest of five children, where her mother ran a boarding school. One of her siblings was R M Lockley the naturalist whose well-known book ‘The Private Life of the Rabbit’ later inspired Richard Adams’ ‘Watership Down’. Lockley would occasionally visit Moreton End and talk to the boarders. 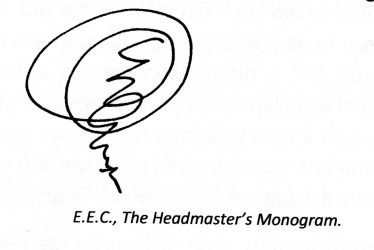