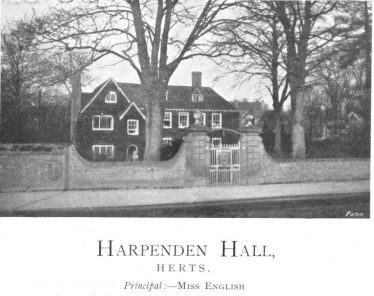 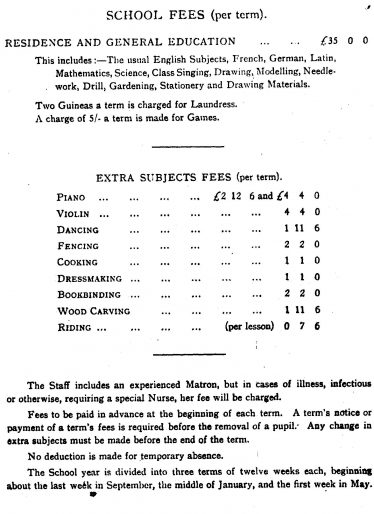 The prospectus opens with a description of Harpenden Hall, “standing on high ground” facing the Common.  The school had accommodation for twenty girls.  There was a “large old-fashioned garden with tennis and croquet lawns, and also a field for games”.

The principal, Miss English, had been “with the late Mrs Huxley when Prior’s Field (Godalming) was opened in January 1902, and had stayed there till July 1909.  She had studied “the modern methods of teaching in England and on the Continent”, and had specialised in history and modern languages.

“The object of the School, which was opened in January 1910, is to give girls the care and individual attention which it is impossible for larger schools to provide, and to combine the freedom and happiness of home life with the discipline essential in a school.

“Miss English, assisted by a fully qualified staff, gives a thorough general education, and endeavours to have the girls taught in such a way as to arouse their intelligent interest and artistic sense, while developing the particular talents of each child.

“No work is done before breakfast or after supper at 7.  Lessons in the morning are from 9 till 1.20, with a break of forty minutes at 11 for lunch and short walk on the Common.  Dinner is at 1.30 and games and walk from 2.30 till 4.45.  Tea at 4.15 and work till 6.45.  This part of the day is left as free as possible for modelling, singing, music and preparation. … After supper there is either needlework and reading or games and dancing.

“During the term occasional visits are made to museums, art galleries, and other places of interest in London.”

There was a fitted gymnasium.  Half-an-hour every day was set apart for Swedish drill, and as much time as possible was spent out of doors.  Each girl had her own garden – gardening being one of the subjects taught.

Unfortunately, the prospectus does not specify the ages of the pupils, nor the date of publication, but was probably soon after its establishment, and before 1914.  It concluded with a long list of references, including parents of pupils, of whom just a few were local: Mrs Griffiths-Jones of The Old Brewery House, Harpenden, Mrs Gerald Hodgson of Blantyre, Harpenden, Dr Smallwood of Wheathampstead and the Rev. Gatty of Offley Vicarage.  Other pupils came from as far away as Antofagasta, S. America, Paris, and North Britain.

*   Chris Earnshaw keeps a watching brief on eBay on behalf of the Society. He has recently acquired a page from a 1912 book, which includes a listing of girls’ schools. The document attached below complements the Prospectus in our archives. It remains a puzzle why Harpenden Hall, which stands in the shallow vale through the centre of Harpenden, is described as ‘on high ground’.

From the Prospectus: Miss English, Principal