This page has been re-written in March 2019, with information provided in the form of a timeline by Sue Mitchell, archivist at St George’s School, supplementing references in Pam Weatherley’s History of St George’s School. It is difficult to be certain of the precise location of the Montessori School at specific times. The school was run independently, apart from a short period from 1949 to 1955 when it appears to have been merged with St George’s School Harpenden Ltd. 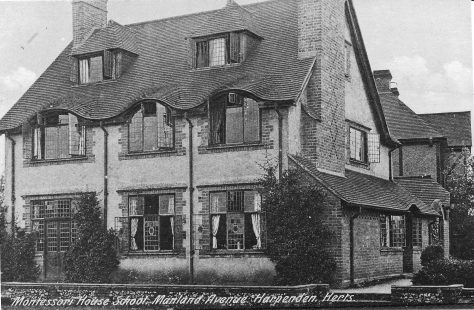 The Rev Grant, first Headmaster of St George’s School, was always keen to welcome whole families to the school. He had become interested in the teaching of Dottoressa Montessori in Rome, and had visited her in 1913. In 1916 he founded a separate (Montessori) school to cater for pupils from 2 to 8 years old.  The Company Director was Frederick E Pearce of Fairview, Crabtree Lane, and the Chairman of Governors was Mrs Le Mare of The Spinney, West Common, and later resident in Crossthwaite House, Carlton Road. It is not clear from the St George’s archives whether the school was operating from near St George’s school buildings. The Dottoressa visited St George’s in 1919 and 1925.

By 1920 the school was housed at 6 Manland Avenue, but the date is difficult to determine as Kelly’s Directories were not published for the years between 1914 and 1922. It was also listed as “Montessori School, Montessori House, Manland Avenue” in the Commercial section of Kelly’s between 1922 and 1924. 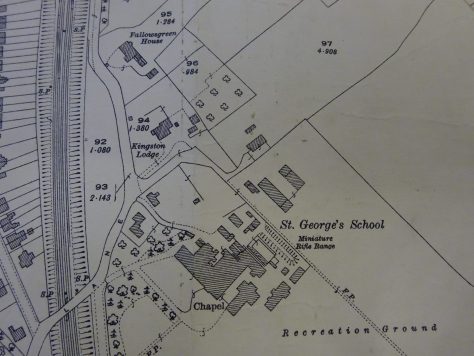 In 1924 Kingston Lodge, close to St George’s School, was purchased, and from 1926 it was listed in Kelly’s directory as “Montessori School, Montessori House, Sun Lane”. 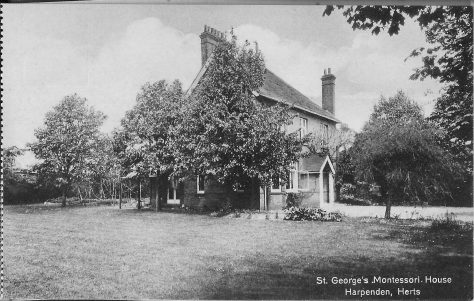 This building was later known as Goddard House and is currently (2019) the Music Department of St George’s School. 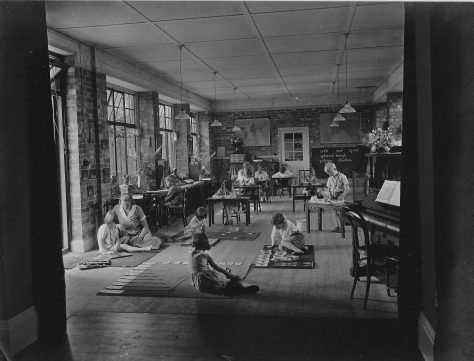 In 1930 the Montessori School, still a separate entity both academically and financially, was extended with a long classroom being built on to the back of the house, and in 1934 an upper classroom was added. Miss Matthews was Directress of the School, with Miss Thornton as Matron. Mrs Darracott was also listed together with various helpers. Pupil numbers ranged from 31, but falling to 19 by the end of 1931. Economies were needed.

The following year the name was changed to St George’s Children’s House, to widen its appeal. A new illustrated prospectus was produced (source of the accompanying pictures). Advertisements were placed in Patons, The Times of India, Kellys‘ and the Travellers Gazette, as well as in The Herts Advertiser and the Luton News. This led to an increase in the number of pupils to 25 by the end of the year. In 1936 Mr Mario Montessori attended a meeting of the Directors. 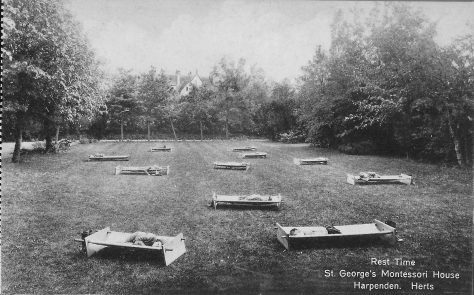 Rest time in the garden – at the back of Goddard House?. Credit: LHS archives – scan from Montessori brochure

During the second world war, the Children’s House was evacuated to “Bremamoor” at Belstone, near Paschoe in Devon, where the rest of the Lower School was accommodated. However some pupils remained in Harpenden, housed in the Sanatorium.

In 1945 Children’s House (Harpenden) was incorporated as a limited company, and in 1949 it merged (for business purposes) with St George’s School Harpenden Limited – until 1955 when it ceased to be part of St George’s  School.

Move to Gorselands – and independence 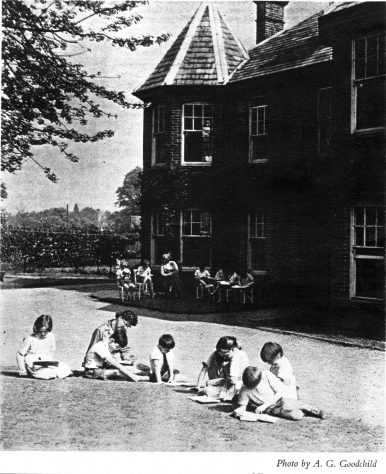 Gorselands – advertisement: Mrs J M Blackden, formerly Principal of St George’s Children’s House, now conducts a school for 5 to 8 year olds, recognised by the Ministry of Education, at Gorselands …. Boys and girls are prepared for entry to the Lower School of St George’s. Credit : LHS archives

In December 1955 the Children’s House moved to Gorselands at the corner of Queen’s Road and Walker’s Road in Southdown. Here it was run by Mrs Jean Blackden LRAM, as a private pre-preparatory school – see advertisement below. She had previously been head of the Children’s House at St George’s, and the Gorselands school ceased to be part of St George’s, though links continued to be strong until the school closed. 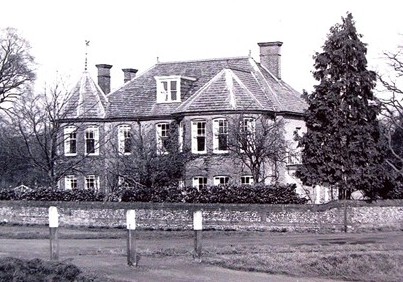 The Gorselands house was demolished and replaced in 1976 by a development named Gorselands.

Below are scans from the brochure for the Montessori School, published as a booklet of postcards in the 1930s, when it was in Kingston Lodge. 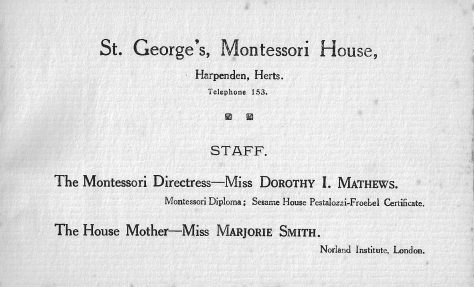 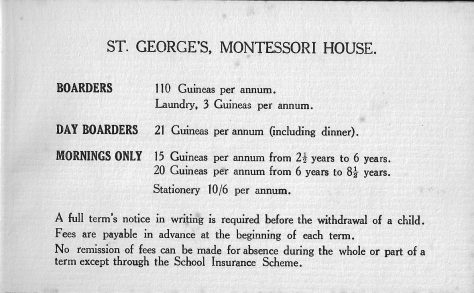 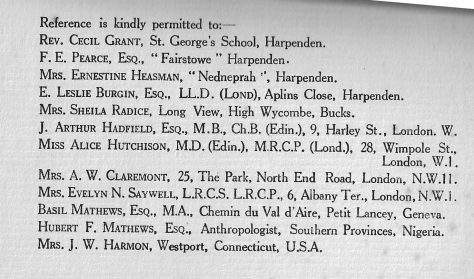 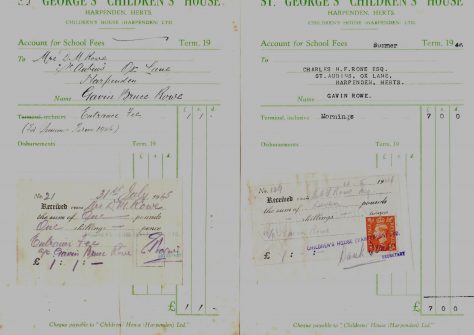 By Rosemary Ross with information from Sue Mitchell, archivist at St George's School