From Bowers Cottage, via Harpenden Hall and The Welcombe Convent to purpose-built school 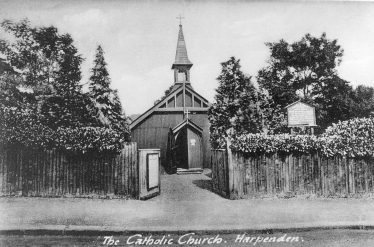 After Henry VIII’s charter of 1536/7, rejecting papal authority and granting Harpenden parishioners the right to bury their dead in their chapel (St Nicholas church) or graveyard, Catholicism seems to have disappeared from the area until the 1890s, when three or four Catholic families were served by a priest from St Albans – Father A Macdonell.

By 1905 Father Peter Martin, a curate in St Albans, started saying Mass every Sunday for the 22 Catholics in the area, first of all at the gymnasium in Vaughan Road, and then in a temporary corrugated iron chapel which was erected in Rothamsted Avenue in May 1905, just west of St Nicholas parish church. Priests from St Albans said Mass here weekly until 1919.

Before WWI Father Bernard Longstaff had spent eleven years as a curate in a London parish, followed by a period of service as an Army chaplain. On leaving the Armed Forces he took up his new appointment as parish priest in Harpenden in November 1919. He quickly set to work to repair the temporary church, acquire a presbytery, purchase land for a permanent church and start a school in his parish, to be run by Dominican nuns.

Bower’s Cottage, on the site now occupied by Abbey National/Santander Bank, was purchased and part was adapted for the use of the Sisters and part for a small school called St Dominic’s. According to the Dominican archives (kept at St Dominic’s Convent, Stone, Staffordshire) “the stables were then converted into two classrooms and cloakrooms etc forming a separate little school. This was for the poorer children who were unable to pay fees etc and it was known as St Catherine’s”. 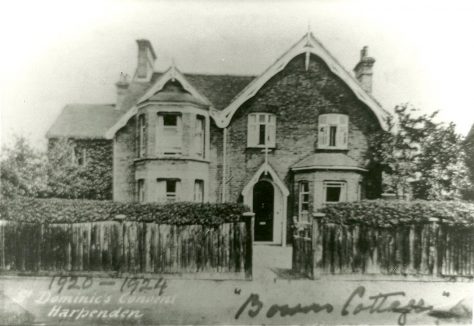 Move to Harpenden Hall in 1923

Father Longstaff was “more than disappointed” at the decision to exclude poorer children, and helped with finance for the conversion of Bowers Cottage, and then for the purchase of Harpenden Hall in 1923, for an expanded convent and school. Alterations were completed in time for the school to open at Easter 1923, with Sister M Thomas as Headmistress. 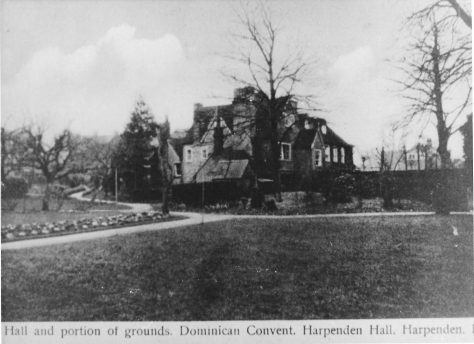 The school settled and rapidly expanded, so that in 1926 it was decided to build a new wing, which provided two more classrooms as well as dormitories for the school, financed by the Sisters’ highly successful fund-raising team. This was opened by Cardinal Bourne in June 1928. The school by now had 84 pupils. At the same time, the Sisters sold off strips of Harpenden Hall’s grounds for the building of the new Post Office and of Harpenden Dairy in Station Road. Later in the same year, Cardinal Bourne returned to Harpenden to lay the foundation stone of the new Catholic Church, to replace the old corrugated iron structure in Rothamsted Avenue. Fifteen months later, on 26 October 1929, Cardinal Bourne opened the new church.

The archives record that in 1930, “The new Post Office erected on the purchased strip of Convent grounds was a huge ugly building which overlooked the Convent premises, School and garden, and deprived the Sisters and children of their essential privacy and quiet”, and it was decided that the school would have to move, despite having invested so much in Harpenden Hall.

Early in 1931 “a property within a few minutes walk of Harpenden Hall was put up for sale. A large commodious house called Welcombe, built in Georgian style and with a very nice Entrance, Exterior grounds of nearly ten acres, comprising Tennis lawns, Recreation grounds with some fine trees, Vegetable and fruit gardens and fields suitable for School games”. Together with two cottages, a garage and some Outbuildings this was considered an ideal place for the Convent. Some structural alterations, repairs and installations had to be made. With the help of Canon Longstaff, Harpenden Hall was sold to Harpenden Urban District Council, to help finance the costs of the move to Welcombe.  Photos of the convent as a family home can be seen on the page on Welcombe. 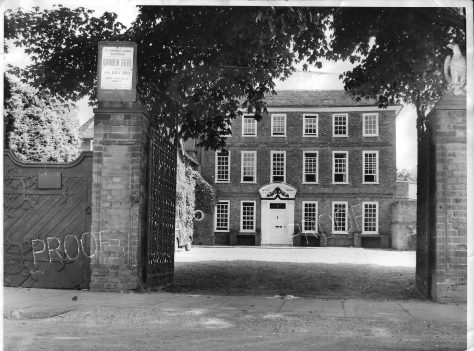 The Convent, at Welcombe, 1964 – as marked by the poster for a school fete. Credit: LHS archives, donated by Harpenden House Hotel, March 2014

During the 1930s, the Sisters needed to adapt to the growing demand for places in Catholic schools, including from those who could not afford the fees. The school had to compete for funding with the needs of the new church of St Lourdes, consecrated in 1929, Lourdes Hall built in 1936 and with new chapels and schools in Redbourn and Wheathampstead. In September 1939 a new Kindergarten block was opened, and with the outbreak of war and the arrival of evacuees the large garage was adapted as a classroom for 30 children. The school survived without much damage, but during a bombardment on Harpenden in 1940 “one large bomb exploded on the front lawn, another in the games field and yet another just outside Lourdes Hall”.

Impact of the 1944 Education Act

The 1944 Education Act brought challenges – an end to the educational independence of the school, since “under the new Education Bill, it is required that all schools be inspected by the Board of Education, and if satisfactory be Registered otherwise to be suppressed”. The annals record that the first inspector advised changes, and from July 1946, with rising numbers of Juniors, it was decided “to reorganise St Dominic’s on the lines of a primary or Junior School”, but with the hope of later building a new Senior Department. In 1948 it was decided to “have Day Pupils only and to use the Boarders Premises for teaching purposes”.

However under parental pressure it was decided in 1949 to build a new school hall and to convert the stable premises into a small domestic Science Department – so that from September 1949 the school provided secondary education for those who had failed their County Common Entrance Exam. Pupil numbers rapidly increased to 187.

By 1953, with plans to open a new Catholic Secondary Modern school at Garston and with Loreto College well established in St Albans, the need for the Senior department declined and “it was considered best of concentrate on building up a really good Junior School”. In September 1954 the school reopened as a Junior School only, and in 1955 it was formally recognised as an Independent Primary School.

A school report dated 1959 commented that “Although the fees are nominally fourteen guineas (£14.70) a term, nearly half the children are now here on an average of one quarter of the fees and several are accepted free for the sake of their Faith.” The school had about 200 pupils, and took boys up to the age of nine. “So far, Providence has watched over us where staff is concerned since, under the circumstances, Burnham salaries have been out of the question.” Like many other convent schools, they were employing staff who, in some cases, “were not particularly good teachers but were the only ones the school could get at the time”.

A series of photographs of the school and pupils in the 1960s is set out at the end of this page – taken just before the move to the new school, except for school sports, marked as being in 1954. 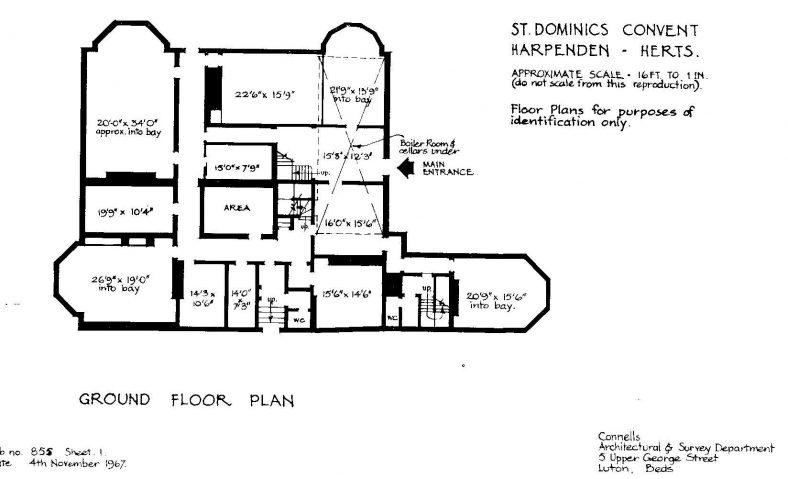 Ground floor plan of the Welcombe, from the 1967 sales catalogue, showing adaptations for the school. Credit: LHS archives – BF 25.10

The increasing Catholic population in Harpenden led to the need for yet further expansion. Following a visit by Bishop Cashman and Canon Rivers of Westminster Diocese in January 1962, they urged the Sisters to “undertake the planning of a proper Primary School building having an overall plan”, but to begin building the most necessary parts first and adding to it as funds became available “with a view to eventually becoming Voluntary Aided”, and so a part of Hertfordshire Education Authority. The diocese was prepared to make an interest-free loan, and other funding could come from the sale of a strip of land along Southdown Road for residential building (nos. 31 to 36), and later the sale of the playing field to the Local Education Authority. As a temporary measure, Lourdes Hall was loaned to the school for a year, and divided into two classrooms, in readiness for September 1962.

On 4 September 1962 the General Council decided to build a new Voluntary Aided school in the grounds of Welcombe, and to authorise the sale of land to finance it. Mr David Stokes was appointed Architect and Mr David Chaston won the tender for the new building. Trees and ground had to be cleared before work could start on the foundations in December 1963.

In September 1964 the new, purpose-built school opened with 240 children – 146 girls and 94 boys – with Sister M Francesca Lucas as Headteacher. There were seven classes: preparatory and forms 1 to 6, with eight members of staff and extra-curricular teachers.

Over the preceding years the number of teaching Sisters had declined, but Kevin Rafferty’s book does not comment on the closure of the Convent, and where the Sisters lived after Welcombe was sold in 1967. The sale of the Convent and related buildings for conversion to Harpenden Moat House Hotel must have boosted the new school’s building funds. Sister Francesca was an honoured guest at the opening of the hotel in 1970, according to photos recently donated to the Society by Harpenden House Hotel staff before its closure at the end of March 2014. 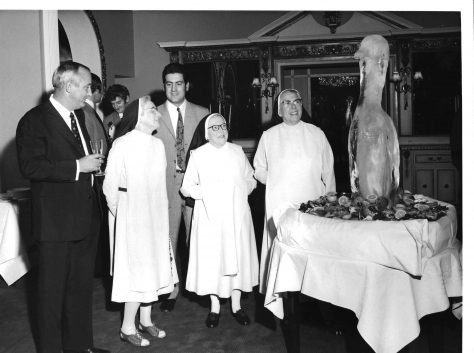 A further milestone came with Sister Francesca’s retirement in 1977, when Mr Gerard Mooney was appointed as her replacement. Before she left, a Shrine to Our Lady of Lourdes in the grounds of the school was officially opened and blessed on 11 February 1977. In July 1978 the last of the Dominican Sisters left Harpenden. The school log records that on 24 July: “Dominican Community came to say farewell before leaving Harpenden and present the school with a Gold Chalice and two ciboria. The sisters entertained the staff to sherry in the Staff Room.” Perhaps at this time, the foundresses of the school gave up their ownership of the land to the Diocese.

Kevin Rafferty’s book summarises the changes in education over the first thirty years in the new premises, under Sister Francesca, Gerard Mooney and, from January 1989, his son Andrew Rafferty. We hope that others will add to this brief history of the school by adding comments, or writing a new ‘page’ for the website.

Photographs of the Convent School and pupils from the 1960s.

Please help identify pupils if you can. 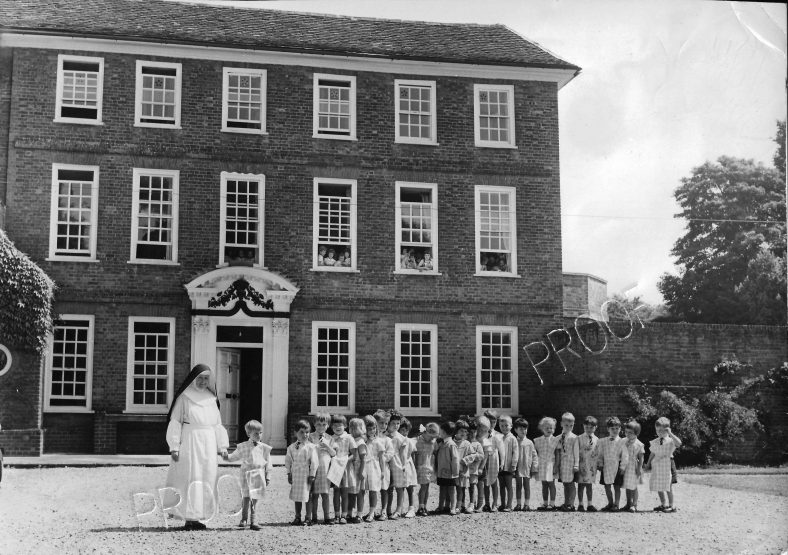 A nun, with the infants class. Perhaps they are about to go on an outing? Credit: LHS archives – Welcombe-HHH album – Press photo proof, c. 1964 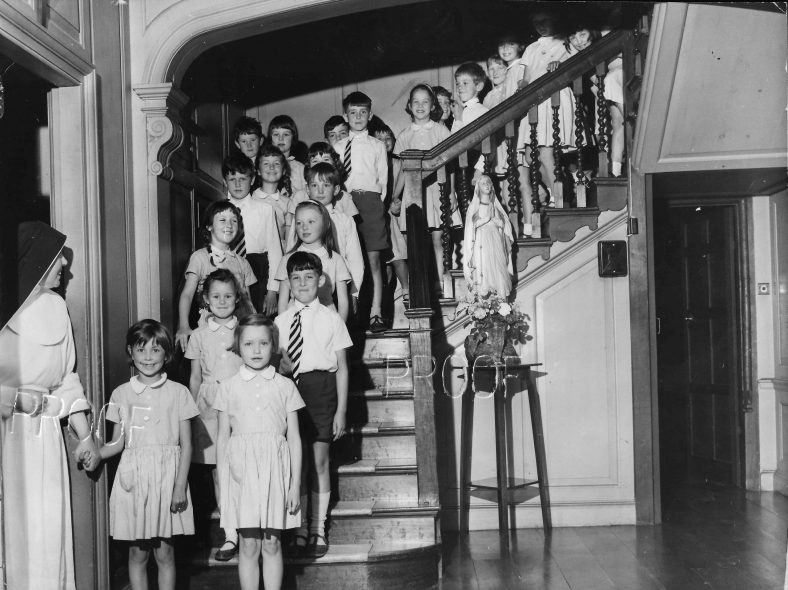 Pupils on the main staircase 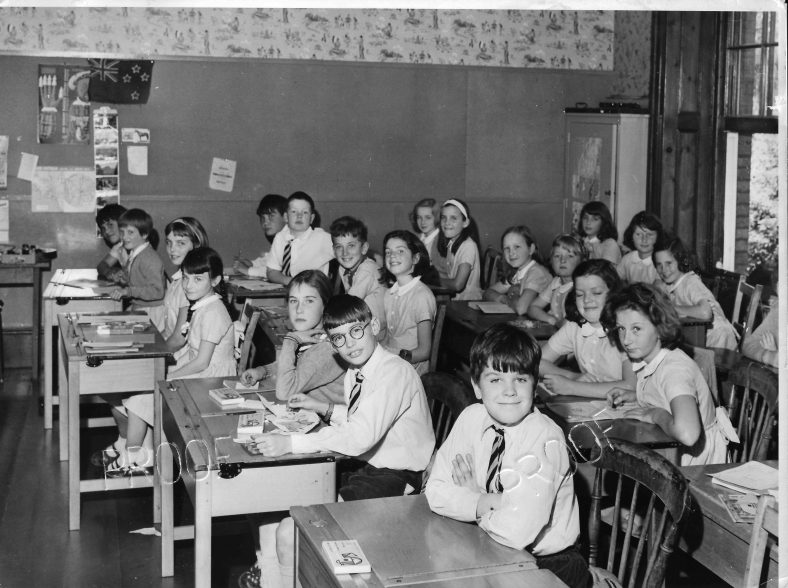 Classroom in the former Billiards Room 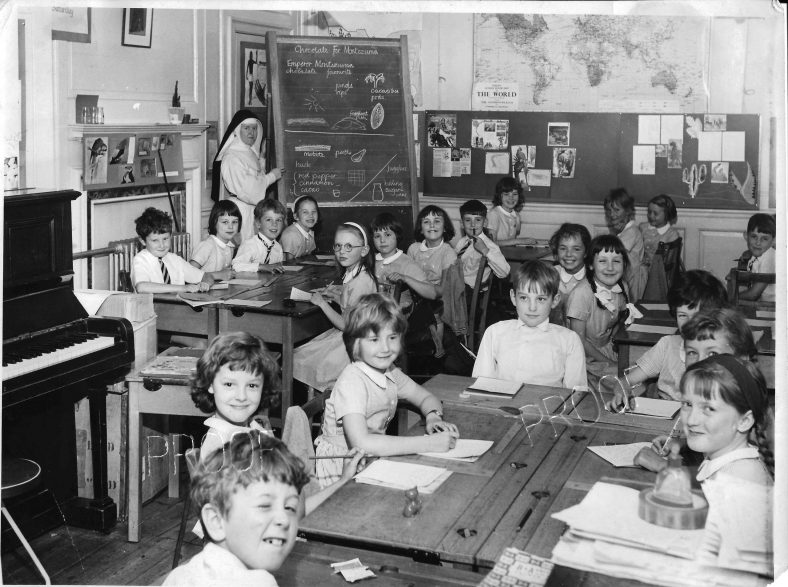 Classroom on the first floor 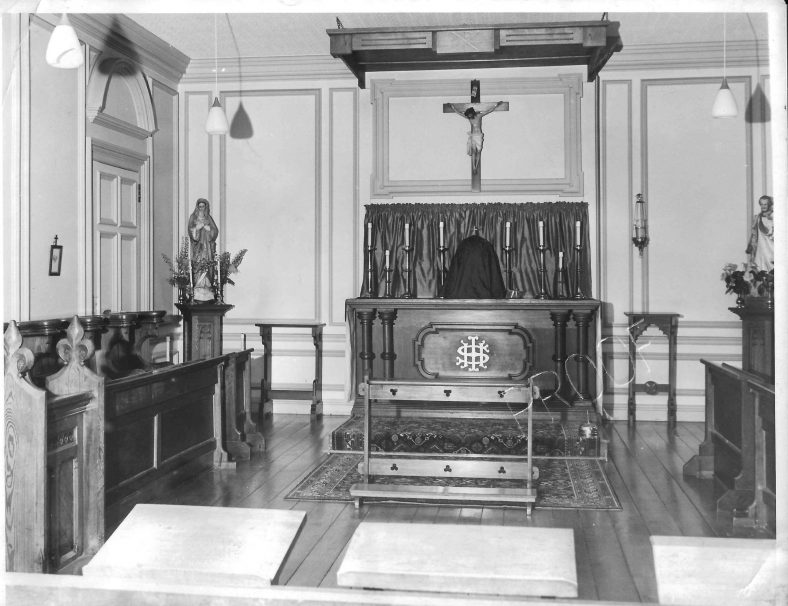 The Convent chapel. We think this was in what had been the dining room in the 1930s. Credit: LHS archives – Welcombe-HHH album – Press photo proof, c. 1964 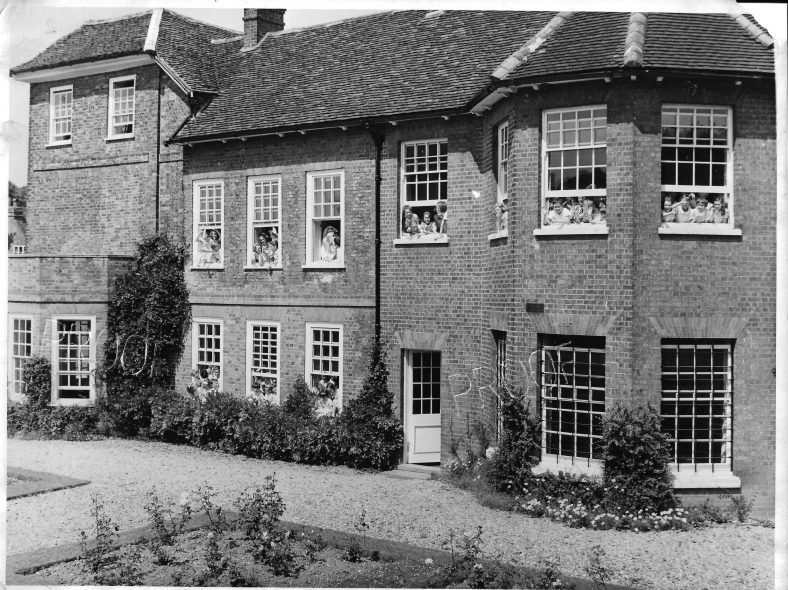 Pupils looking out of the first-floor windows on the south side. 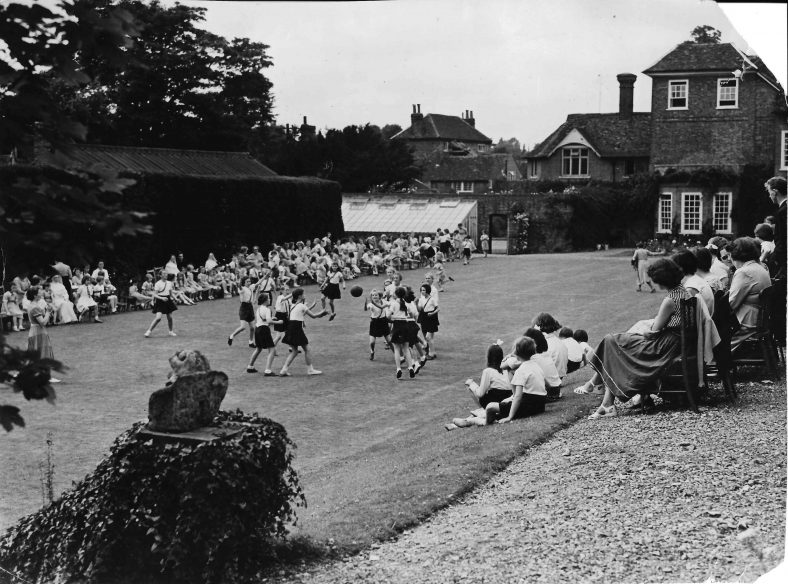 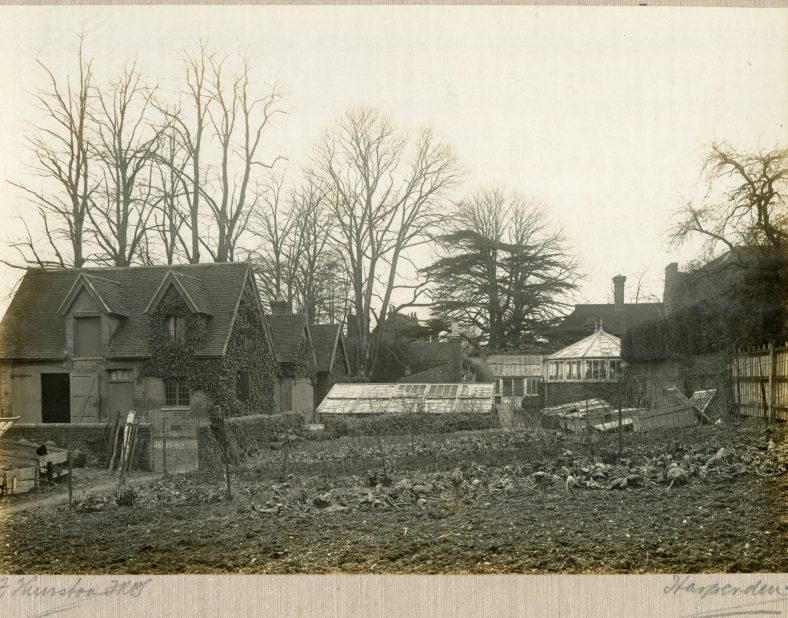 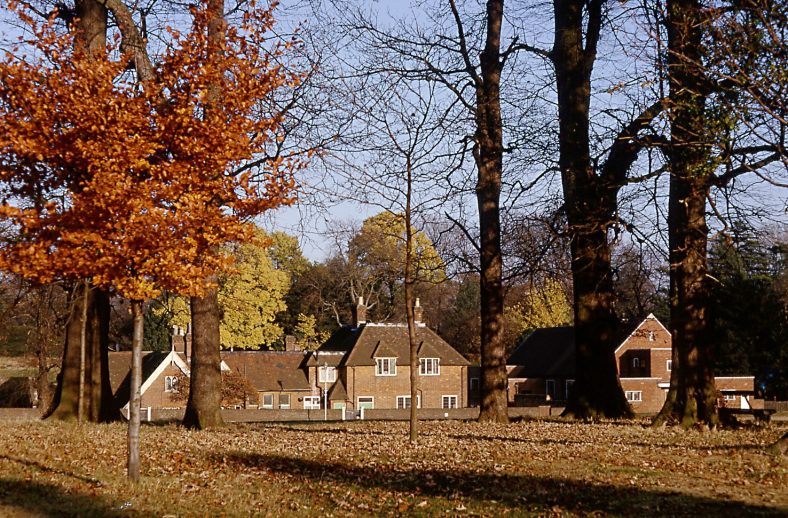