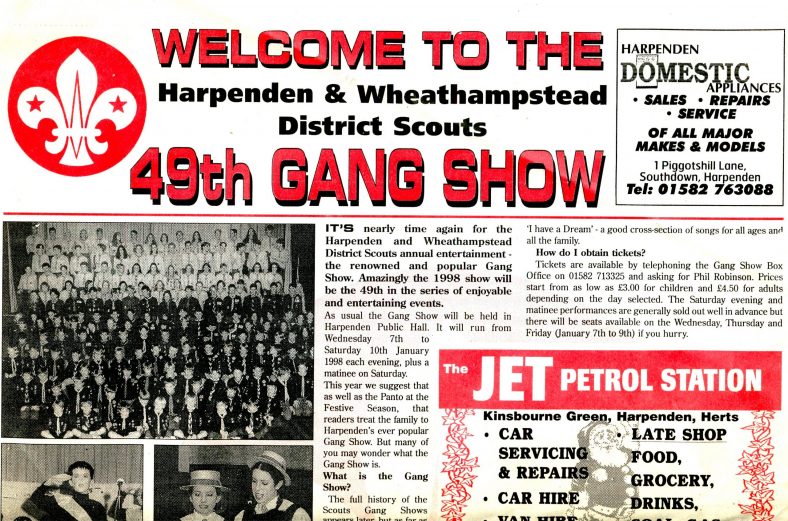 National History of the Gang Show

The first Scouts Gang Show was performed on 30 October 1932 at the old Scala Theatre, Tottenham Court Road in London. The Show, which in those days was performed by Scouts in uniform, was originally called “The Gang’s All Here!” 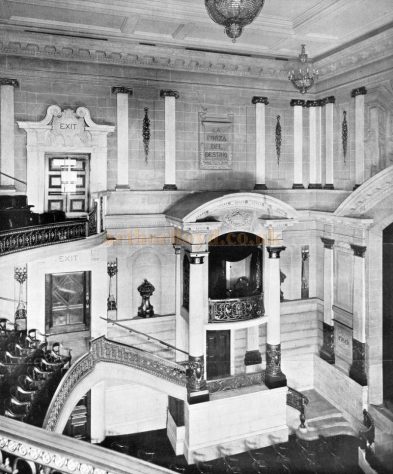 Ralph Reader, a young theatrical producer and choreographer, was the creative force behind the early Gang Shows. He wrote and produced the revue to raise funds for the London Scouts. The Harpenden show is also primarily a fund-raiser for the many local Scout, Cub and Beaver groups.

From the very first performance the tradition was established that the cast was made up of the Scouts themselves. Sixty-six years later the tradition lives on in Harpenden.

The “Gang Show” name first appeared in 1934. The shows were a great success. In 1935 the Gang Show ran for a fortnight and every single seat was sold before the opening night. In 1937 the cast performed at the Royal Variety Performance. Sadly the curtain came down for the last time on the London Gang Show on 2 November 1974.

Harpenden Scouts produced their first Gang Show way back in October 1949, the second in January 1951. Ever since then the show has been performed every January. 1998 will mark the 49th consecutive show. Many traditions continue. The song “Crest of a Wave” became a firm favourite – it now concludes the end of each memorable performance.

Ewan Murray, 36, the current producer of the Gang Show, recalled past Gang Shows and some of the more unusual events. “My first Gang Show was in 1972. I was a Cub Scout at the time and only took part in one of the numbers, but from then on I was hooked!”

He then recalled the subsequent years as he progressed through the ranks and the many years that Marilyn Hudson produced the show. “Marilyn set an extraordinarily high standard and was a hard act to follow when she decided to step down in 1994 after many years as Producer. Having been Musical Director myself for six years I was asked to take over the Producer’s job. It requires a great deal of my spare time all year round, but especially from September through to January, but it is very worthwhile and enjoyable.

“It is a great team effort. As well as all those you see on the stage there are numerous people working behind the scenes to make it a success. It is reckoned that around 10% of all Harpenden families are involved in some way with the Gang Show.”

Ewan then went on to recall some of the more interesting and memorable events of past shows. “During a dress rehearsal for a ‘Summer Holiday’ item, the bikini-clad girls of the cast caught the eye of one of the stage crew who was crawling on the rafters above the stage. He became so distracted with the view from his vantage point that he dropped his hammer, narrowly missing the girls below!”

Ewan then recalled an incident in 1972. “The Cubs were performing a routine called ‘The Buccaneers’. Gun fire was simulated by a stage maroon. At the dress rehearsal it was found that the maroon was a bit too powerful. It made a gaping hole in the stage. By opening night the hole had been repaired and a smaller maroon was used.”

His final two reminiscences confirmed the old show business maxim ‘The Show Must Go On’. “In the early 70s during the three-day week, an unscheduled power cut plunged Harpenden into darkness half way through the show. An enterprising father went with two others to fetch their cars. They drove them up the steps outside the hall, their headlamps on full beam and provided improvised spot lights!”

“More recently, in 1994, there were terrible blizzards during show week. The number of audience and backstage staff were decimated by the weather on the Thursday evening and the show started 45 minutes late. The assistant hall manager became a member of the Lighting Pool; the pianist played the saxophone; the musical director played the piano; a cast member’s father played the bass and a friend played the drums. Who said the war-time spirit is dead?”

Notes on some people involved included:

David Keen* – “David is another of the ‘Un-sung Heroes’. He is responsible for the magnificent scenery which adorns the stage. … His tour of duty as Scenery Manager commenced in 1988. In 1996 he also adopted the role of Stage Manager. David, formerly a headteacher, is now Education officer at RAF Hendon. His daughter Rachel was in the Show until 1995 and was in the ‘Front Row’ for two years.”

*While David continues to be very active in the Gang Show, he has recently become Curator of the H&DLHS collection – drawing on his 20 years at the RAF museum at Hendon.

From the four-page tabloid-sized brochure and programme