From three to none

This article was first published in Newsletter 33, January 1984

The closure of the Embassy Cinema at the end of October 1983 brought to an end seventy years of “going to the pictures” in Harpenden.

Our first cinema was the White Palace, which opened on 14 May 1913 at the corner of Leyton Road and Amenbury Lane. It had seating accommodation for 450 people, including a balcony with 25 seats, and a small box, said to be very popular with courting couples. Seats were priced at 3d, 6d and 1/-: the shilling seats could be reserved by phone or messenger. 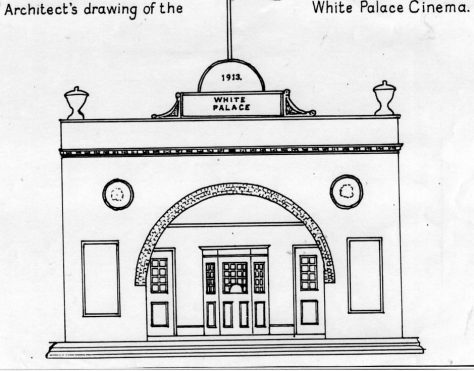 The early films were silent, of course, and each cinema used to employ a pianist to set the mood by playing appropriate music.  Harpenden’s first pianist was a young lady called Ursula Bloom. She moved in the autumn of 1914 to Walton-on-the-Naze and became a prolific novelist. At the cinema she played for six evenings a week from 6 to 10.30pm and for three matinees from 2.30 to 5pm, for all of which she received 30/- a week (£1.50).  I do not know who immediately followed her, but by the twenties the pianist was Mr Roland Swallow, who later became a piano tuner, and died at the Red House in 1984. 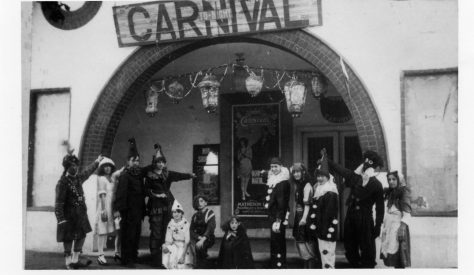 The White Palace, entertainment in the foyer. Credit: LHS archives

The original owner of the White Palace was a Mr Clements. In about 1916 or 1917 he sold it to Captain Frederick Webb, who was born in Melbourne and came to England in the early 1900’s. He was a cinema pioneer, being the first person to show “moving pictures” in Melbourne, where he projected them onto a portable tarpaulin from a cricket pavilion. The first films he showed in England were at Leighton Buzzard in 1909. In 1917, he controlled the Chequers at St Albans and cinemas at Hemel Hempstead, Newton Abbot and Driffield as well as the White Palace. He changed the name to the Victoria Theatre, probably in honour of his home State in Australia. 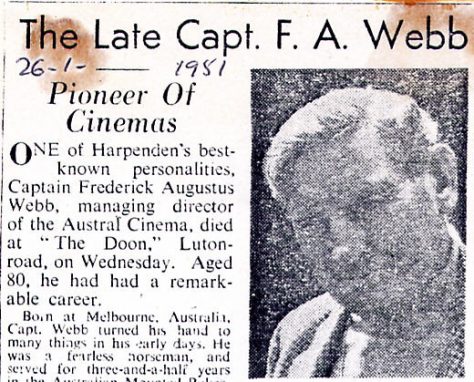 Captain Webb appears to have sold the Victoria Theatre towards the end of the twenties to a Mr and Mrs Howard. Mrs Howard took a very personal interest in the cinema, and had a habit of phoning regular patrons if she had not seen them at the cinema in a particular week, to tell them what a good film they were missing.

From silent to talkie

From 1927 talking pictures completely changed the movie industry. They were not universally popular at first. In the “Picture Show Annual for 1932” a contributor wrote: “There must be a large number of present–day picture-goers who will always regret the passing of the Silents. I number myself among them, for no matter how great may be the development of the Talkies, there was a certain charm about silent pictures. Beauty of face and figure, on which the pictures had been built, was no longer a first essential. The voice was all powerful, all conquering”.

Another contributor pointed out that at first, because of limitations of the microphone, it was no longer possible to shoot films out-doors, and he missed the scenery.

Nevertheless, the talkies were here to stay, and cinemas had to be adapted to show them.  At the same time patrons were beginning to demand rather more luxurious accommodation, and although the Victoria was, I understand, fitted for sound it was beginning to appear a rather shabby little building.*

The Regent, later the State cinema 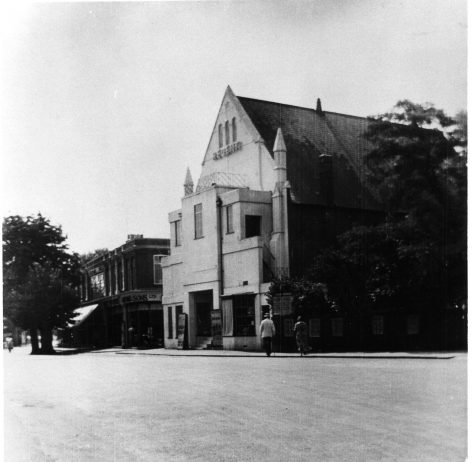 After extensive alterations, including a completely new frontage in gleaming white, with all the architectural features outlined in red, green and blue neon light, the building opened as the Regent Cinema on 26th May 1933 in the presence of about 500 people, including over 200 invited guests.It was formally declared open by Mr R G Taylor, who said that “Harpenden had felt the need of such a cinema for some years”. The BTH installation of sound equipment was the finest that could be produced.  Everything in the cinema was British, and the films for that evening’s programme were all British. Local industry had been supported, for the builders were Messrs Jarvis and the draperies and carpets had been supplied by Messrs Anscombe.

The Austral, later the Embassy Cinema

The Victoria seems to have closed about this time. Meanwhile Captain Webb had been busy. He bought a plot of land along the Luton Road which had been part of the Rectory garden, and built a brand new cinema, naming it the Austral, after his home country. It was opened by Sir Halley Stewart on 27th November 1935. The big film was Cardinal Richelieu, with a supporting film and two Disney cartoons “Peculiar penguins” and a Mickey Mouse. The proceeds of the opening programme were given to the Harpenden Nursing Association. 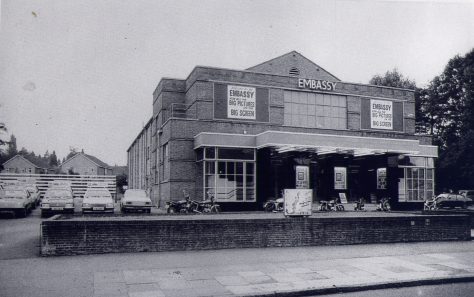 The Embassy (formerly Austral) in the 1980s. Credit: LHS archives

The directors were very proud of their new building, especially of the lighting system, and announced that “the auditorium is lighted by means of a new method known as the Holophane “Moulded Contour “system This is the latest development in lighting and the installation at the Austral Cinema is one of the first of its kind…  The lighting may be changed into a countless number of hues and the installation is remarkable for the fact that it has an unusually large number of pastel colours which are pleasing to the surroundings and which cause patrons to look their best…   The Holophane stage curtains have been specially designed for use with this lighting installation and the lighting effects on the draped folds are very lovely.  The effectiveness of this curtain when used in conjunction with the music has earned for it the title of “The Tapestry of Dreams”.

Patrons of recent years will be interested to read that “Special attention has been paid to the heating and ventilating, and all possibility of draught and discomfort to patrons has been eliminated”.  “The green carpeting was specially woven and supplied for the theatre by Messrs Anscombe”

The cinema opened on Monday to Saturday from 2 to 11pm with a continuous performance. Doctors and professional people expecting messages were invited to leave their names with the attendant as they took their seats, so that they could be easily notified should that be required.

With 870 seats the Austral had the greatest seating capacity of any building in Harpenden until the Public Hall was built a few years later, and it was used for a public meeting on at least one occasion.

For nearly twenty-five years Harpenden had two cinemas. Each adapted to the advent of Cinemascope and fitted wide Panoramic Screens – the Austral (which in 1951 changed its name to the Embassy) in 1953 and the Regent in 1957. But tastes and fashions changed, and cinema attendances fell.  The Regent changed its name to the State, and specialised in X films for a while, but closed ostensibly for re-decoration, in 1959 and never re-opened. The building became Anscombe’s furniture department for twenty years, but has now been demolished as part of the Waitrose supermarket site.

The Embassy continued for another twenty-four years. When I first visited it in 1961 it was still the custom to serve adult patrons of matinee performances with a cup of tea and biscuits- a very nice touch.

Eric added a footnote:  “This is really an interim report: a lot of research remains to be done on Harpenden’s cinemas.  I have not been able to trace the actual closing dates of either the Victoria or State cinemas.”  He appealed to readers for personal recollections of any of the cinemas. 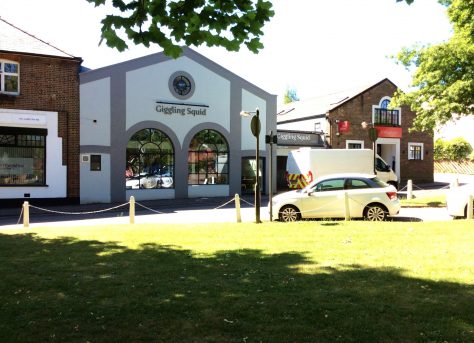