"Opportunity Knocks" for a Harpenden Choir 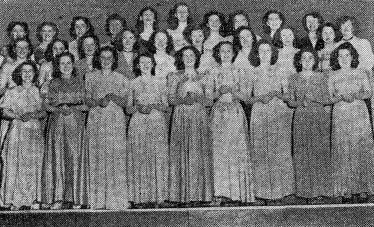 All the excitement and bustle before they sang to their biggest audience ever, appeared to have little effect on the 30 members of Harpenden Young Ladies Choir, as they sat behind the BBC microphone on Thursday waiting to take part in the programme “Opportunity Knocks”

At any rate they looked quite composed to the audience of about 100, including some Harpenden people, who saw the show in the underground Paris Cinema, Lower Regent Street, from which the broadcast came.  About four hours earlier they had arrived by coach at the cinema to rehearse “Beyond the Blue Horizon” which they were to sing over the air.

Stanley Black, whose augmented orchestra accompanied them, wanted Tony Thatcher’s arrangement sung in dance tempo to suit his orchestration, and this meant hard work for the next two hours.  While their own conductor Mr L.G. Challice, watched offstage, the choir went over the song again and again under Stanley Black’s baton until he was satisfied.

In between rehearsals, the younger members of the choir sought out film star Glynis Johns, who also took part in the programme, for her autograph.   Producer Ted Wilson welcomed the audience and introduced the compere, Hughie Green, and announcer, Pat Mc Grath, who put everyone in the right mood with a few jokes and a little banter.

Then, as the second-hand on the large clock on the wall came to 7.30, red lights flashed, the band struck up, and the programme was “on the air”.   Looking as much at ease as the two comperes, Mr George Harris, the choir’s secretary, went on to the platform as “the discoverer” and explained that in the choir there were ten sopranos, seven seconds, seven thirds and six contraltos.

Asked the girls’ ages he came back quickly with the reply:   “Please Hughie… I have to go home with these ladies in the coach afterwards! Its safe to say the youngest is twelve”.

The choir then had their opportunity – which including the introduction, lasted 3 and a quarter minutes. After the show, they went to the recording studio in New Bond Street, where they heard their song played back and were told they would be able to buy records.

Pleased because Stanley Black had said he would continue his interest in the choir, the girls returned home feeling that all the excitement was worth the experience. I felt it was an achievement and an encouragement to the choir, who have made good progress in the past year, during which, with members of their associated concert party, they have raised £38 for charity.