February 15th 1948 was a landmark date for cinemagoers in Harpenden, as it was the first Sunday that ‘cinematograph entertainments’ were allowed to be screened in the Urban District (Ref.1). Records show an earlier attempt had been made to obtain Sunday cinema licensing under a derivation of the Sunday Entertainments Act, 1932 (see Note 2). A public notice, dated 10th January 1941, stated that at a meeting of the Urban Council on 16th December 1940, resolution was passed that application should be made to Parliament for those authorities licensed under the Cinematograph Act 1909 (see Note 1) to be given powers to enable cinemas to open on a Sunday in Harpenden, under the Emergency Powers (Defence) Act, 1939 (see Note 3).  Any representation regarding the proposal had to be made to the Urban Council by 25th January 1941. Further records to confirm the outcome are unfortunately missing. It could be that certain criteria under the Act were not met. 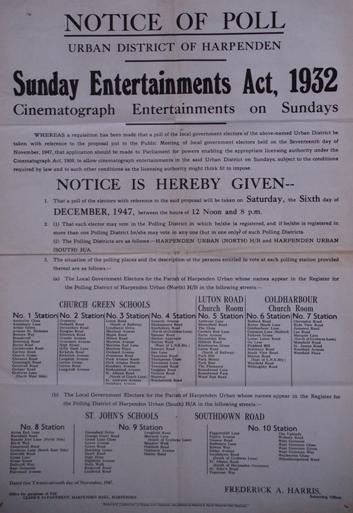 At a meeting of the Urban District Council on 13th October 1947 it was again decided to apply to Parliament to allow cinemas to open on Sundays.  Under paragraph 2 of the Schedule to the Sunday Entertainments Act, 1932, the council gave notice of a Public Meeting to be held on 17th November 1947 to decide whether to submit a Draft Order to the Secretary of State. Minutes of the next Urban District Council meeting record that the Public Meeting had been held, and by a large majority decided against proceeding with the application.

Demand for a referendum

However, a requisition for a poll was subsequently received, and under the Regulations of the Schedule a poll may be demanded by not less than 100 local government electors within seven days of the meeting.  A notice informing the public that a poll had been set for 6th December was posted on 24th November 1947 together with details of the ten polling stations in Harpenden for voting.  A “Declaration of Result of Poll of Sunday Entertainments Act, 1932” was posted on 6th December 1947 showing there were 1753 votes in favour, 1182 votes against and therefore the majority in favour was 571 votes.

Correspondence between Frederick A. Harris, Clerk, Harpenden Urban District Council and the Under Secretary of State, Home Office, Whitehall showed the Declaration of Result of Poll had been returned to Harpenden for certification by the Chairman of the Council in accordance with paragraph 6 of the Schedule of the Act before it could be accepted. A letter dated 27th January 1948 from the Under Secretary of State informed the Urban District Council that the Order had been approved by the House of Lords and House of Commons on 22nd and 23rd January 1948, respectively. It confirmed that Section 1 of the Sunday Entertainments Act, 1932 extended to the Urban District and that Hertfordshire County Council, the licensing authority, were empowered to allow Sunday opening, subject to the conditions required by law.

After the required licences had been issued the first Sunday show at The Regent cinema (Leyton Road) was on 15th February 1948, with “Song of the Open Road”, supported by “Don’t Hook Now” (Ref.1).

The first legislation specifically covering cinemas. It brought them under local authority control and required them to be licenced.  The Act was designed to regulate public screening of films and ensure cinemas were in a suitable physical state to screen films safely, as several serious fires had been caused by the highly unstable nitrate film.

The Act permitted local authorities to open and regulate the use of places on Sundays for certain entertainments.

Section 1 of the Act – Extension of Powers to allow Cinematograph Entertainments.  Allows a poll of local electors on whether to allow Sunday opening of cinemas.

The Act, a simplification of the 1932 Act (Box 2), was limited to areas where Sunday opening of cinemas would be a desirable amenity for members of His Majesty’s Forces billeted in the neighbourhood. A certificate to this effect from a competent naval, military or air force authority was required. The local council could then submit a draft order to the Secretary of State giving notice of the intention. Neither a meeting of local government electors, or a poll, or local enquiry was necessary.