This article was first published in the Society’s Newsletter 134 in March 2018.

A report of the event by Margaret Walter was syndicated to many American newspapers: the copy below is from The Hutchinson News, Hutchinson, Kansas. (8 August 1918, page 6)

School children of England show feeling towards America.
They establish alliances.
One of the first schools to do this has been St George’s School at Harpenden.

***
The school children of England have no intention whatever of allowing the grown-ups to do all the fraternizing with us Amerlcans! 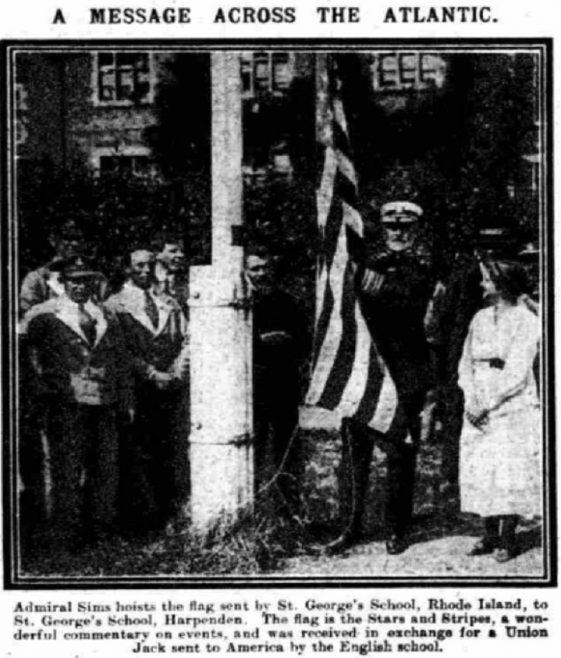 One of the first big schools to do this has been St Georges School at Harpenden. On the 5th of July they celebrated American day, St. George’s Flag Day, they had a Red Cross Fete and Sale, and inaugurated their alliance with St. George’s School at Newport, Rhode Island, U.S.A.

Admiral Sims went down to make the inaugural address, and a fine rough bit of “eloquence” it was, too. First thing he did was to ask for a chart, so that he could tell them just how they lay in regard to Newport, Rhode Island, and then be went on to give the boys and girls hints on how to get friendly with their American school. In the course of his short speech Admiral Sims confessed that he was the dunce in his school and only scraped through Annapolis by the skin of his teeth because he was always depending on his big brother who was a smart chap. He told of his own early school days nearly sixty years ago, how he trudged to school through the choking dust or the deep mud in summer and with cowhide boots through the snows in winter to the log school house, how often how was licked and so forth. Audience applauded.

But it was when he got down to the minute and explained how the American navy is working with the British Grand Fleet, how they put our code of signals in the hold when they got here and adopted the British signals, how on the other hand the British had taken lots of our Ideas and chucked their own because ours were better, that the audience was moved to applause.

“We can’t afford to mess the whole game and spoil this show by any differences between ourselves, we two nations, and that’s a fact,” added Admiral Sims. “There’s another thing that has to be done. We have got to write some new history-books for American boys and girls to read. The books I used to study weren’t history; they were mostly meanness against the British. That sort of thing has to go. We have got to have new books for the new generations who are going to run this world.”

Then Admiral Sims presented a big silk American flag to the school and in return a little fellow about six years old came forward to give a British flag to the Admiral. The head master explained that the father of the youngster had made the great sacrifice in France. Admiral Sims knelt as he took the flag from the boy’s hand

St. George’s School is one of those co-educatlonal schools in England. There are about two hundred pupils and the scheme works to perfection. There couldn’t be a more beautiful place. It lies about thirty miles from London, right in the heart of Hertfordshire The grounds are filled with ancient trees, there are wide lawns and all sorts of playing fields and courts. The gardens are as beautiful as any in the county; the whole place was a riotous blaze of color.

The chapel of the school is rather famous because it has been frescoed by F.W. Walter, a former drawing master of the school, who did much for the revival of mural painting In England until the war took him to France where he is now in command of a howitzer battery. Among the suggestions put forward for a better understanding among school children of the two countries is one to exchange scholars with schools in America. Whether this will be worked out after the war I don’t know, but anyhow at present those English boys and girls are determined to find new ways of knowlng Americans – and I guess that we shall not turn down any advances they make. 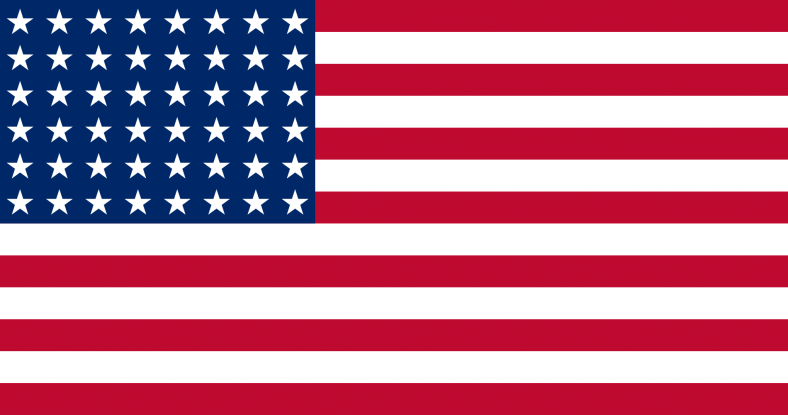 An article in the Hertford Mercury and Reformer on Saturday, 13 July 1918 (page 5) informs us of the notables present and of the inauguration of a link between the school and St George’s School in Newport, Rhode Island, a popular boarding school.

Theodora Wilson went to the Speech Day and recorded the event in her Journal. She expresses a similar note of optimism for the future as did Margaret Walter:

‘Above all America and what America stands for is writ large across 1918. We had a little bit of local heroics over the American alliance at Harpenden just a month ago when Admiral Sims of the USA navy came down to St George’s school on their Speech Day and presented the Stars and Stripes to the school in token of a special affiliation between this school and a St George’s school in Rhode Island where the Admiral’s home is. I was the only one of the family able to go and I took dear little Mrs Quin, our new curate’s wife, under my wing. There was a packed audience of school-parents and general public in the big school-room and Admiral Sims made a neat little speech to the boys and girls….’

When the speeches were over we streamed out onto the lawn by the flag-staff and there, after posing for his photograph more or less draped in Old Glory, with the head girl of the school standing beside him, the school-girl hoisted the flag, which is always a thrilling thing to witness. It was a good symbol of this year when Women’s Franchise has come in – and women’s work and responsibiity have been multiplied tenfold – that it was a girl and not a lad who raised the flag.’ 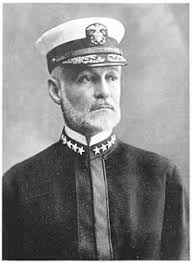 Graduated from Annapolis 1880. Naval Attaché, Paris, 1898. Gunnery specialist; complained to President Theodore Roosevelt of poor US Navy gunnery standards. Met Sir Percy Scott and other Royal Navy officers with a mutual interest in naval gunnery in Chinese waters during the Boxer Rebellion and kept in touch with them afterwards. (At this time the accuracy and range of naval guns had advanced rapidly but these advances were negated by the lack of a fire control system that could predict the position of a target at the instant that shells would hit. At 20,000 yards range a 12? shell took about 30 seconds to reach the target which, at 21 knots, will have travelled over 300 yards since the shell was fired)

Promoted to Commander and appointed as naval aide to President Roosevelt, 1907-9. Captain, USS Nevada, 1913. Liaison to London March 1917 as Vice-Admiral commanding US Naval forces in European waters 1917-19. Retired 1922. In retirement was outspoken and controversial and described as ‘a notorious anglophile’ by opponents. 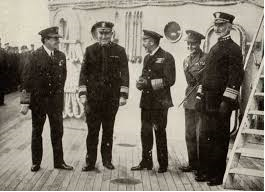 A review of vessels of the allied fleets was held at Rosyth on 20 November 1918. King George V is here seen on board USS New York with the three senior Admirals and the Prince of Wales (the future King Edward VIII).

Admiral Rodman commanded the four US battleships attached to the Grand Fleet as the 6th Battle Squadron.