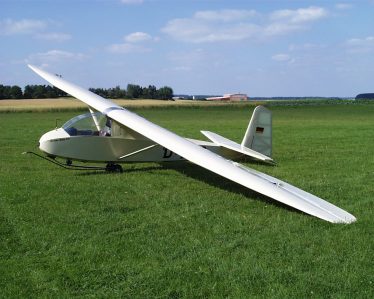 In 1931 Harpenden was the scene of the first gliding fatality in this country.  It happened at Faulkner’s End on March 8th when Captain Thomas Eaton Lander, of the Old Rectory, Luton Road, crashed from a height of 40 feet, from which he sustained a fractured skull, and despite treatment from his friends, died a few minutes later.

Gliding was a relatively new sport, although its origins went back many years.  There had been many attempts during the nineteenth century to build a glider capable of carrying a man.  The first person to achieve this was Sir George Cayley, a Yorkshireman.  In 1853 he built a glider with a 23 ft wingspan, and “persuaded” his reluctant coachman to pilot it for the first flight.  It was launched by manual effort: a team of his estate workers ran downhill pulling ropes attached to the glider until it lifted off the ground.  It flew 300 yards across a shallow valley, landing in a meadow on the other side.  The coachman then gave in his notice.  This was 50 years before the Wright Brothers achieved the first powered flight.

But it was not until after the Great War that gliding really developed as a sport.  Under the terms of the Versailles treaty Germany and Austria were not permitted to build aircraft, so from about 1922 they started building gliders instead, and gliding became a popular activity there.

It developed in Britain too, and the British Gliding Association was formed in 1924 to provide a focal organistation for enthusiasts.  One of these was Captain Lander.  “He was 37 years old, a motor engineer who enjoyed perfect health” said his father at the inquest.  “He was a Captain in the Highland Light Infantry, seconded to the Royal Air Force.  During the war he had the bones of his left leg shot away and was frequently troubled with his leg in consequence”.  The inquest was held at the Vaughan Hall on Tuesday 12th March.  Three representatives of the British Gliding Association attended: the Chairman, the Chairman of the Technical Committee, and the Association Solicitor.

Several witnesses gave evidence.  A group of friends met at Captain Lander’s house in the morning, and then went to Faulkner’s End.  They took a gliding machine with them, named “Scud”.  It was smaller and 100lbs lighter than the gliders they were used to.  Captain Lander had never flown this model before.

They were testing an experimental way of launching, designed mainly by Captain Lander.  Previously launching had been done with a manually operated winch, but they were using a car, which they had bought in January and adapted for the purpose.

A winding drum was fixed to the driving shaft of the car with a 100 yard length of steel cable attached to it.  The cable went from the side of the car to a wheel pegged into the ground about 40 yards away.  It went around the wheel at right angles, and was attached to the glider.  They had laid a short runway of timber, to make take-off as easy as possible.  The wind speed was about 25 miles an hour, and the glider pointed to fly directly into it.

When all preparations had been made, Captain Lander raised his arm to signal that he was ready.  Mr Elliot, who was operating the car, set the engine to three quarters of its maximum revolution, and gradually let out the clutch.  “The result was very unexpected” he said.  “The glider left the ground, climbing rapidly, and reached a height of about 40 feet in less than a second.  I realised that the speed must be much too fast, and immediately depressed the clutch.  The cable sagged at once, and the ring grip disconnected from the nose (of the glider).  It then dived almost vertically into the ground”

After several more witnesses had given evidence, the Coroner, Mr T Ottaway, in returning a verdict of “Death from miadventure” said that it appeared that the whole problem arose because they had not calculated the probable speed that the motor car engine would provide accurately enough, coupled with the fact that they were using a lighter glider than usual.

Expressing sympathy with the widow and children of a “gallant gentleman” he added that although it was of small consolation, he felt that a life had not been given in vain, if in the march of progress and science, discoveries for the benefit of mankind had been made.