From Prince Regent to Elizabeth II

This article first appeared in Newsletter 82, May 2000 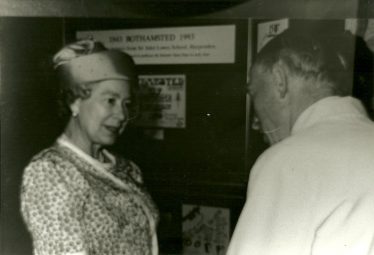 The first Royal visitor to Harpenden was George, Prince of Wales, later to become Prince Regent.  As a young man he was friendly with John Bennet Lawes (father of the agriculturist) who owned Bennets in Leyton Road from 1789 and lived there intermittently until he moved into Rothamsted Manor in 1801.  The Prince came to Harpenden on several occasions to hunt and stayed at Bennets.  John Lawes greatly extended the stables (now Lussmans restaurant) for the Prince’s convenience and thereby nearly impoverished his family.

On 23rd July 1894 the Duke of Cambridge, Queen Victoria’s cousin, passed through Harpenden on his way to Childwickbury.

He was met at Harpenden station by Sir John Blundell Maple and taken to Childwickbury for lunch before going to St Albans to open Clarence Park, a gift to the city from Sir John. 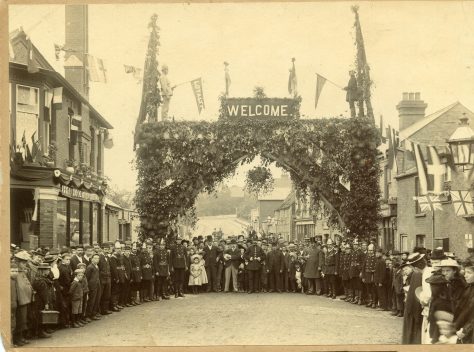 Queen Elizabeth the Queen Mother grew up at St Paul’s Waldenbury.  In May 1989 when our Society was preparing an exhibition on Royal Connections, Simon Cotton received a reply from Sir Martin Gilliat, the Queen Mother’s Private Secretary which read  “As a child and until the time of her marriage the Queen Mother recalls frequent visits to Harpenden and Wheathampstead with the members of her family, sometimes to go to the shops, and sometimes to visit the homes of friends”

King Edward VII paid an involuntary visit on 17 February 1907 when his car broke down.  He was on his way to visit Sir Julius and Lady Wernher at Luton Hoo, and spent a couple of hours at the top of the Common waiting until a relief car arrived.

On 4th February 1920 the Prince of Wales, on his way to a meeting of the Herts Hounds at Bowers Heath, called at the Railway Hotel (now the Harpenden Arms) and shook hands with Mr and Mrs Harry T Smith, the proprietor and his wife.

The Duke of Edinburgh paid a private visit to Rothamsted on 20th July 1954, arriving by Helicopter.  After coffee at the Manor House he visited the various departments and toured the farm sitting on a tractor-towed trailer. 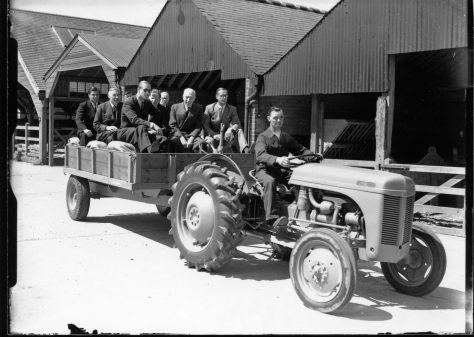 A year later the Duke of Gloucester, himself a farmer, made a similar private visit on 20 June 1955.  He also had a tour of the farm and field experiments while sitting on straw bales on a trailer.  He had lunch at the Manor, where he met the heads of departments, and tea with the staff at Red Gables.

On 6th April 1962 Princess Margaret, in her role as President of the Church of England Youth Council, came to Harpenden to plant a tree on a site at Pickford Bridge, where the new All Saints Church was to be built.

On 25th June 1981 children and staff at the National Children’s Home in Harpenden had a right royal visitor – the Duchess of Gloucester.  The Duchess, President of the NCH spent an hour and a half at the home, and her tour of the NCH campus at Harpenden included a visit to the flats at Highfield Oval and to the South Eastern Regional Office.  A bouquet was presented to her by a 6-year old Sandra Almelda, who lives at the home.

The main reason for her visit was to attend the annual sports day at Elmfield School for physically handicapped children.  Children from a similar school at Chipping Norton also took part and Her Royal Highness presented cups to the winners.

Princess Anne came on 8th May 1987.  She is the President of Save the Children Fund and came to receive donations from all the schools in Harpenden.  The ceremony was held at St George’s School. 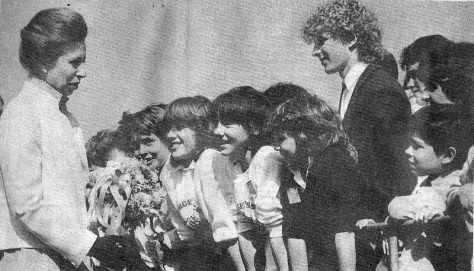 Two years later, on 5th April 1989, Princess Anne was here again, to visit the Consumers Association laboratories in Harpenden Rise.  The Association presented her with a £35,000 donation to Save the Children Fund which had been raised by sales of a commemorative Peter Goldman Rose named after the former Consumers Association Chairman.

Princess Diana visited the Spelthorne St Mary home for women in Milton Road on 23rd April 1987, and this visit received coverage in most of the national papers.  An enthusiastic onlooker kissed her hand when she stopped to speak to him and the resulting photograph appealed to many national editors. 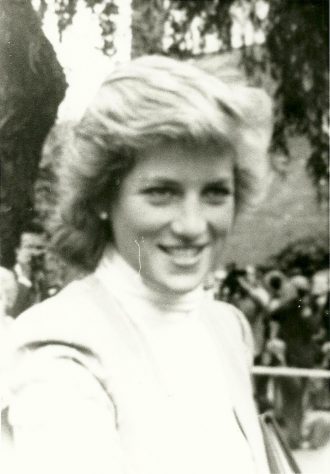 In 1993 Rothamsted Experimental Station celebrated its 150th anniversary.  The Queen visited it on 30th July and delighted everyone by announcing that she had agreed to become Rothamsted’s patron. She toured the buildings and farm and talked to staff and their families. To commemorate her visit she unveiled a plaque on the base of the memorial stone, and planted an oak tree nearby.

Perhaps, for the sake of completeness, we should include King Peter of Yugoslavia, who may have visited Harpenden when the Yugoslav embassy (or part of it) was evacuated to 53 Milton Road during the Second World War.