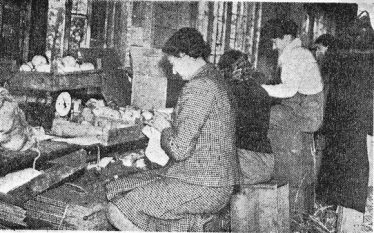 This article was written in response to the report of the closure of Claygate Orchards in the Harpenden Free Press the previous week in early March 1955.

The Second World War gave me the opportunity to do some constructive out-of-doors work and I applied for a job at Claygate Orchards where women were required to fill the gap caused by the shortage of male labour. I was wholly inexperienced concerning orchard work and had no conception of the initial stages of apple growing. As far as I was concerned they grew by some mysterious act of nature requiring no further attention. But this abysmal ignorance was soon dispelled and, in company with nine other women and watched by the sceptical remains of the male staff, I was put through my paces.

The orchard then consisted of roughly forty acres divided into three sections and was given over to the growing of Cox’s Orange Pippins on the cordon system. James Grieves were planted every eighth row in order to pollinate the Cox’s and in addition to the James Grieves there were Laxton’s Superb, Bramley’s Seedlings, Ellison’s Orange and one long row of Lady Sudeley’s which used to fascinate me because of their perfect scarlet lustre. Grown near the entrance they made a wonderful splash of colour in the early autumn.

One foreman, a ruddy faced man with thick black hair and gypsy eyes and possessed of a sanguine temperament seemed not unduly disturbed when, in an excess of zeal, we snapped off his tenderly cared for ‘maidens’ with an over-enthusiastic hoe – a proceeding which must have cost our employer loss of sleep and hard cash. It was he who initiated us into the mysteries of grafting and budding, teaching us to distinguish stock from maiden by the different texture of the wood, and the subtle variation in the shape and colour of the leaves. This was by no mean as simple as it sounds and for some weeks one was fearful of committing wholesale mutilation amongst the maiden trees.

Our employer also instructed us in the art of pruning and there again one was fearful of hacking off some vital shoot, thus destroying many pounds worth of potential Cox’s Orange Pippins. The collective efforts at pruning were a contrast in styles and methods and some examples showed a ruthlessness inconsistent with the pruner’s nature and vice versa.

The orchard’s appearance had a marked similarity to the Kentish hopfields. The trees, grown on the cordon system, were stretched taut between supporting posts and, at a height of seven feet or thereabouts, were encouraged to form an archway. The sight of acres of massed apple blossom in the spring can only be described as enchanting.

But the job was not all beauty. My first winter on the farm was outstanding for the bitter cold weather with the ground inches deep in snow and great icicles hanging from the overhead wires like stalactites. The slender tree trunks, encased in crystal frost gleaming like silver, seemed dormant for ever.

During this weather we were confined to long sheds built of wood and corrugated iron with the trodden black earth as a carpet and a rather inadequate coke stove for heating. The indoor work was uninspiring but necessary. Apart from cutting paper into squares in order to have a good supply of wrappers for the next apple packing season, we did such odd jobs as box repairing and the making of  hoops – those tiresome but vital adjuncts to growing apples on the cordon system, made out of thin wire covered by black mulch paper.

The apple-farming job was bewildering for the first few months and the cycle of work hard to visualise. But after a year’s studentship I had grasped the principle and the pattern was clear. The tasks of autumn and winter, pruning, cultivating the soil, the spring grafting and planting, the successive summer spraying with noxious mixtures of lime sulphur, arsenate of lead and other chemicals passed through long hose-pipes attached to a petrol-driven engine possessed a satisfying rhythm.

This spraying was hard work and needed the services of the entire staff to pass the hose-pipe up and down the hundreds of rows of apple trees. Later in the summer we indulged in a judicious thinning of the fruit.

The picking of the crop was a vast undertaking requiring extra staff, for in an abundant year the orchard carried a crop of well over one hundred tons which had to be picked into canvas bags, transported by hand trolley to the packing sheds, polished, graded, then re-graded and dispatched to retailers and private customers.

A direct postal trade to private customers necessitated the packing of hundreds of twelve-pound cartons – sixty apples compressed neatly into cardboard boxes. During a good year we would pack and dispatch these boxes well into December – a month in which the current growth of stocks from the stool bed were grafted indoors. A job enhanced by the fact that the greatest number of ‘takes’ were rewarded with money prizes.

These little grafts, which in due course would blossom into ‘maidenhood’, were placed in another shed half-filled with sand to await the spring planting. Some of these grafts, fused by the especially green-fingered, grew fulsome small apples which preceded the light green foliage of a normal ‘take’.

Groping about on one’s hands and knees in heavy clay soil shrouded in late autumn fogs, a pair of secateurs in hand denuding the stocks from their parent stools, was far from congenial. This occupation sometimes led to rheumatic pains which the circumspect counter-acted by placing red flannel in their gumboots and round their knees.

We were taught to distinguish the various pests and diseases, scab, red rust, woolly aphis, to mention only a few. One needed to be an expert to deal with them with certainty. But I think something was learnt on the subject.

Apart from technicalities, there was the interest and privilege of working amongst people whose individual circumstances varied enormously. We exchanged experiences and opinions and the sheds became a veritable clearing-house of ideas much enlivened by the presence of several foreign refugees. Naturally there was discussion and grumbling. I found the work satisfying and a creative outlet in a time of world-wide stress. Also one was learning a trade which, in many cases, has proved to be of great value.