You are here: HomenextHarpenden HistorynextPeoplenextScientistsnextLawes and Gilbert: an unlikely Victorian agricultural partnership

Report of a talk given by Roger Plumb at the Society's meeting held on 28 June 2017. 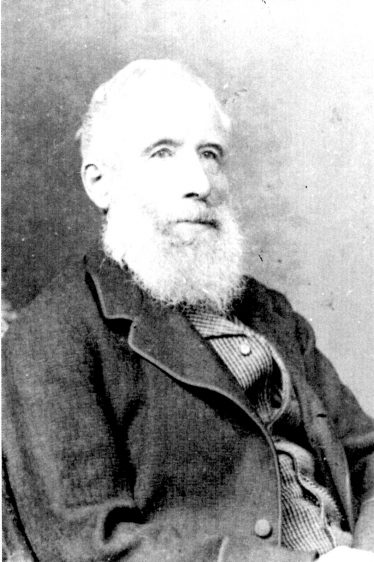 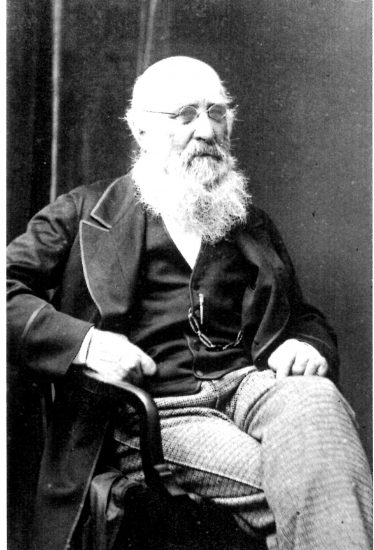 John Bennet Lawes and (Joseph) Henry Gilbert collaborated at Rothamsted Experimental Station for more than 40 years. It was a partnership of contrasts. Lawes was the ideas man whilst Gilbert provided the scientific rigour. Lawes ran the factory business and paid for all the experimental work. Gilbert ran the experiments on the estate at Rothamsted.

2017 marks the 200th anniversary of the birth of Gilbert. When he was about nine years old a phrenologist ‘felt his bumps’ and told his mother not to persist with teaching him Latin and Greek. “Let him specialise where his interest lies in Chemistry,” he advised. 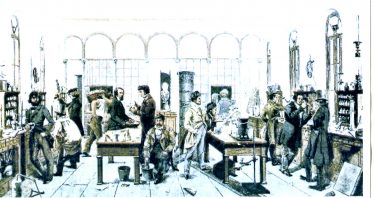 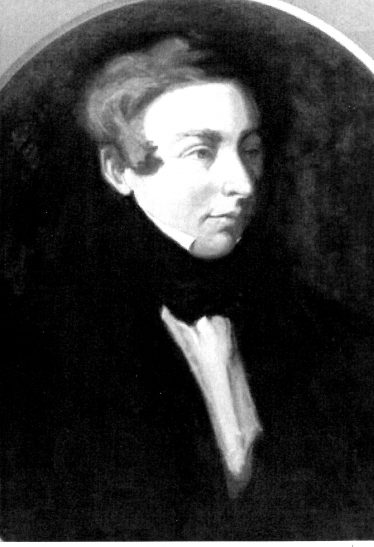 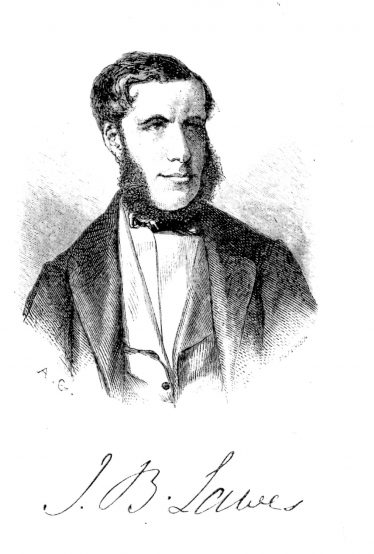 Lawes meanwhile had patented his Superphosphate of Lime fertiliser in 1842. His first experiments demonstrated the benefits of phosphates on root crops, swedes and wheat. He appointed Gilbert on 1st June 1843, to run experiments at Rothamsted whilst he was absent building his new factory at in Deptford.

The first laboratory – in a barn on Barnfield

The Testimonial laboratory – dedicated in 1855

Gilbert worked long hours with modest recompense, though he was responsible for all the scientific activity, accounting and management. His eulogy stated that ‘he was devoted to Lawes’ work, was never jealous and did not wish for personal gain.’ His work started experiments in a Barn on the farm but in 1855 the Testimonial Laboratory was built by nationwide public subscription from farmers, as a tribute to Lawes.

One of the main disputes of the time was where plants such as cereals obtained the nitrogen required for growth. Lawes & Gilbert demonstrated that they acquired nitrogen from the soil, whereas Justus von Liebig, in Germany, argued that they obtained it from the air. Liebig was reluctant to accept the Lawes & Gilbert view which was accepted by most other agricultural chemists. Only after Liebig’s death was it demonstrated that plants of the leguminosae family could obtain nitrogen from the air via nitrogen-fixing bacteria in the roots.

Long term scientific projects were initiated including crop rotation, the Broadbaulk Wheat and Park Grass experiments. Gilbert explored animal nutrition, use of sewage, ozone and effects of weather on crops. Rothamsted’s meteorological reports are recognised as being some of the longest running records of the kind in the world.

Lawes and Gilbert published many scientific papers both together and separately. Papers were time-consuming and difficult to get published. 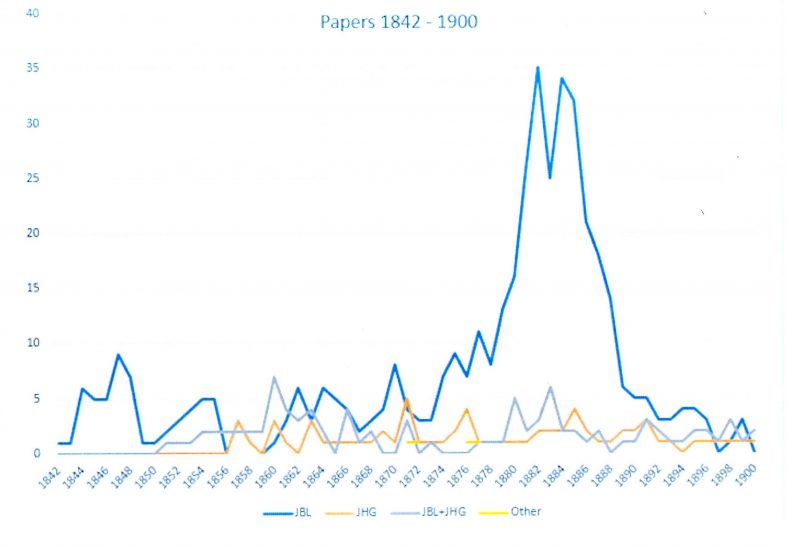 Gilbert was nominated for membership of the Royal Society in 1860. He was awarded many honours in Britain and Europe, one of which was the Gold Medal of Merit for Rural Economy from Kaiser Wilhelm I in 1881, presented to both Gilbert and Lawes. 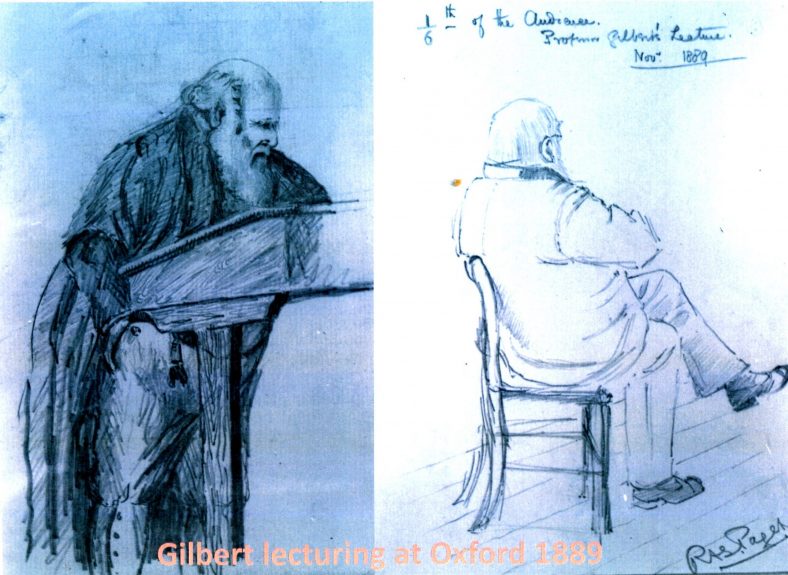 In 1884 Oxford University appointed Gilbert Sibthorpian professor of Rural Economy. He dedicated the text of his lectures (900-1,000 pages) to Sir John Bennet Lawes, as a memorial of their joint labours. 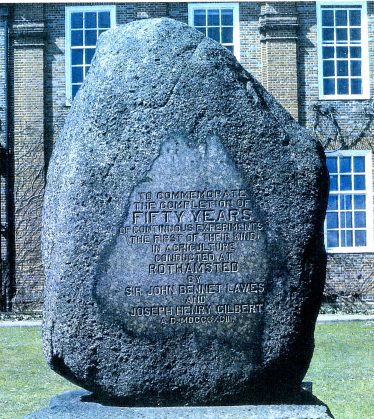 To celebrate 50 years of continuous experiments at Rothamsted, a massive commemorative boulder of Shap Granite was unveiled in August 1893. A few days later, Gilbert was summoned by Queen Victoria to Osborne House to be knighted, the honour coming just too late for his title to be chiselled on the boulder. 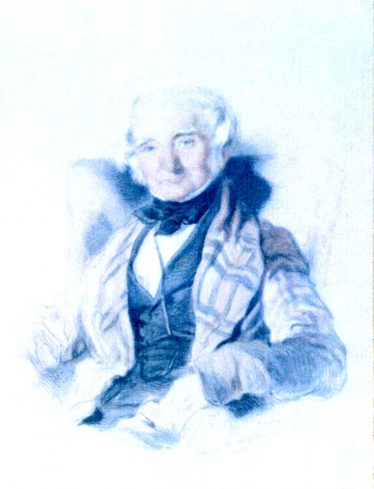 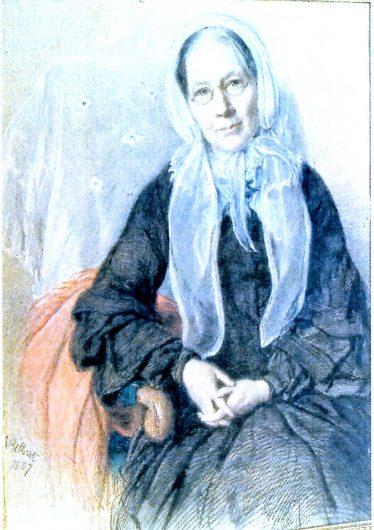 Henry Gilbert’s father was Rev. Joseph Gilbert (1779-1852) a minister at Fish Street, Kingston on Hull, when Henry was born. His mother, Anne Taylor (1782-1866), was a poet. With her sister Jane, whose most famous poem is ‘Twinkle, twinkle little star’ – from which ‘Little Stars Nursery’ at Rothamsted has taken its name – she published many poems and hymns, mainly for young people. She acted as her son’s amanuensis from time to time as Gilbert’s handwriting was atrocious and his eyesight poor, having lost the sight in one eye after a gunshot accident when he was 16.

Whilst at Rothamsted his interests included horseracing, steeplechasing, shooting and charades at Rothamsted Manor. He regularly visited the manor when Lawes was at home, even after retirement. He travelled frequently in Switzerland and Scotland.

Eight bound volumes of letters from 1857 onwards both to and from Gilbert are conserved in the Lawes Trust Archives. Many are correspondence with contemporary European scientists, including Bunsen, Davy and Faraday, whom Gilbert frequently visited and hosted. Photographs of Gilbert in later life show an old man with a bushy beard like Darwin. Although they were contemporaries, Gilbert was apparently opposed to ‘Darwinist Materialism’.

Gilbert died in 1901 and Lawes in 1900. They remained close in death as in life. Their tombstones stand within a few yards of each other in St Nicholas churchyard. 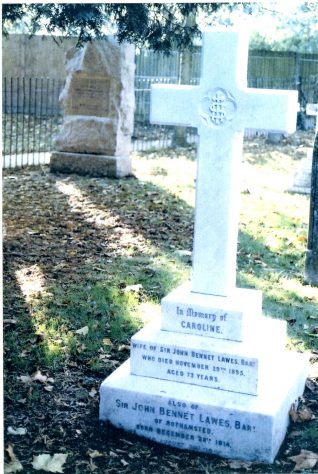 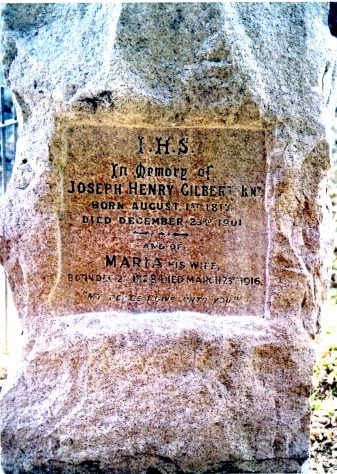 *  The National Portrait Gallery has a portrait of Gilbert in his early 20’s, painted c1840: http://www.npg.org.uk/collections/search/portrait/mw02506/Sir-Joseph-Henry-Gilbert?LinkID=mp01772&role=sit&rNo=0