I have a modern copy of a very old map of Hertfordshire showing Top Street, but not Harpenden, which indicates to me that Top Street was the original village/settlement on Crabtree Lane (an old track known as Top Street) with the farm as the main livelihood of its small population. 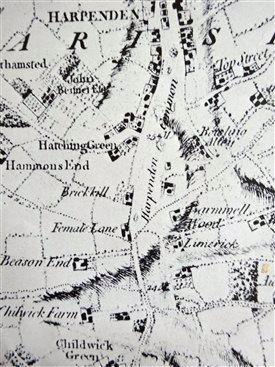 My grandfather, William Dunckley, was acquainted with Sir John Lawes who lived at Rothamsted Manor, which he owned as well as (Lower) Topstreet Farm. When the latter became vacant in 1905 my grandfather took over the tenancy. His elder son William married my mother, and they moved into the farm and continued with arable and dairy farming there.

I was their first child, born in October 1907, and spend a very happy and memorable childhood there. As a young child I was told that the farm was then over 500 years old, so it must be over 600 years now!

How dare they laugh at my house!

At one stage when I was about four the house walls began to deteriorate and became dangerous, so dangerous that the village Council (Harpenden Urban District Council) decided to have the house pulled down. My grandfather, a Councillor, was very indignant and said that he knew a carpenter from the Bowling Alley who could save it. So two very large and tall tree trunks were brought along to shore up the side of the house facing Crabtree Lane. How upset I was to hear people passing the gate and laughing. Even today I remember thinking ‘How dare they laugh at my house!’ However, repairs were done, the tree trunks removed and the house was saved even though it nearly wasn’t.

At the front of the house was a fairly large lawn with a shrubbery, an old apple tree, a large bay tree, three pink-blossomed chestnut trees and an almond tree, among others including two copper beeches. 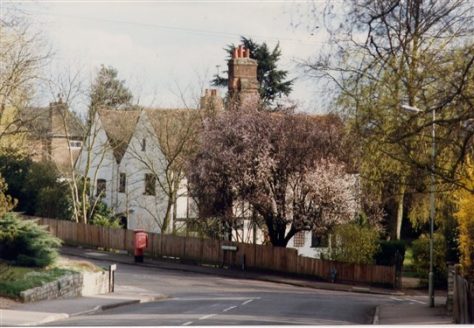 At right angles to the house were small sheds backing on to a path bordered with large peonies at the side of the lawn. This led to an outside WC, a quite splendid affair with a red tiled floor and a covered entrance and a flush toilet which used to get very frosted in winter.

There was a well by the back door, but it was not used as we had water laid on into the house. There were five large bedrooms but no bathroom. Outside the back door was a large shady tree and the remains of a green house still with a grapevine. In the paddock near the lane was a large old walnut tree, a great source for Mother’s pickled walnuts. At the top of the yard were the stables and harness room, and beyond, the rickyard and a granary and barns. 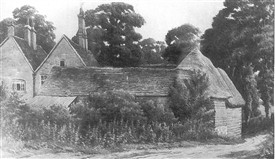 At the beginning of the (20th) century, and probably before, horse racing was held at the top of the Common near Bamville Farm where, incidentally, our grandmother was born in about 1853. I can remember once being taken to watch the races. In those days of non-existent motor horse boxes the jockeys would arrive a day or so before and stay at various stables. There were usually two or three horses stabled with us at Topstreet, and I remember going into the harness room and seeing it full of men polishing the harness and doing a lot of talking. I was soon fetched away and told not to go near there or the stables again. I wonder why!

The pond was man-made and fairly deep and surrounded by a fence with a gate supposed to be kept shut. My small two year old brother, wearing the then fashionable petticoats, fell in. I ran to tell my mother who told one of the men to get him out. Instead he ran to my father who was haymaking in a nearby field. I can still see him rushing down the path, leaping the fence and saving him. The petticoats had kept him afloat for a time.

In the meadow beyond the garden, and behind the old gas works, was a large dell which made a marvellous playground. The ‘Hole’ was vaguely associated with the Civil War of 1642-1649. Between that and the railway line (see note below) there was a semi-circle of trees surrounded by a fully occupied rabbit warren. This probably originated as a source of food for generations long past, but was great fun for us children creeping up and watching its playful inhabitants.

As children we had a very happy childhood and were all very sad when Sir Charles Lawes died (in 1911) and the farm was put up for sale. Our grandfather was killed in an accident in August 1914. We moved to a farm in Redbourn in 1919, but for three more years my father still farmed Topstreet, placing our ploughman, Joe Weston, in the farmhouse. It was eventually sold in, I think, 1923.

My uncle Thomas Dunckley carried on a butchery business in the High Street (no.7) His daughter, Alice Dunckley, married John Hensman Salmon who had a grocery business 10 Station Road (from the 1920s to the 1940s). Their two daughters Alice and Beatrice were still living in Harpenden in the 1980s. 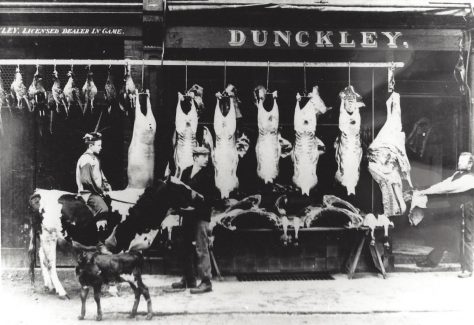 Topstreet Way was laid out by 1926 and Meadow Walk by 1932, when the first residents were recorded in Kelly’s Directories