Article prepared by Miss C.M. Clutterbuck for an exhibition on “Manland” in May 1984, and stored, with illustrations, in a scrapbook to accompany the exhibition. 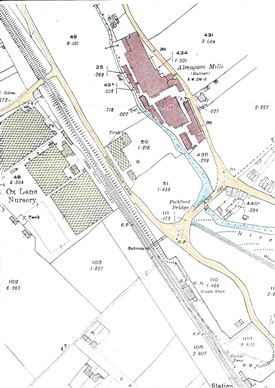 In the local directory for 1900, John Purrott, Nurseryman, appeared in Ox Lane. This seems to be the first mention of the Nurseries – a local industry – which was to employ in the 1930s: “…easy fifty men…” The area concerned was that part of Manland between the railway line and Sauncey Avenue and between Ox Lane and Manland Way.

From at least 1900 there was a range of glasshouses, parallel to Ox Lane, which was reached by a wide gate just above 88, Ox Lane. That house was the despatch office. In 1907, John Purrott appeared again as Nurseryman and Walter Charles Burgess as living at Nursery Cottage. 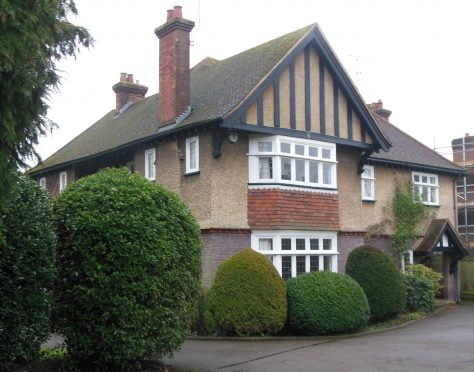 The following Nursery workers were living in Ox Lane:

These last were wooden bungalows tarred black. Frederick Crumplin moved into his bungalow in 1921 when his son, Teddy, was 3 months old. It is from his vivid recollections that these notes are made.

Frederick Crumplin began working for Randalls in 1919 as a chauffeur when the Randalls owned an Austin Seven and a big Talbot. He later became Maintenance Engineer for the Nursery. Tomatoes and cucumbers were grown throughout the period of Mr Randall’s ownership and after the tomatoes had finished, some chrysanthemums were grown, especially for the Christmas trade – “…with heads as big as plates…”

“Up to about 1939, this house was very much like the Bellamy’s – upstairs and downstairs. My Aunt Adela was the cook and her sister, Gertrude, was the housekeeper, parlour maid and was responsible for [the] whole household administration, budget, keeping the pantry stocked up and household linen. There was a chambermaid later when the work was too much for her to manage on her own. There was a gardener, Mr Joseph Milton, who kept the tennis court immaculate. Of course the garden was much bigger than it is now…the cherry orchard used to go right round….”

“The tennis court….as you can imagine, it was a suntrap on that flat lawn…It was a picture in the summertime. It was like a sort of Butlins layout – a real suntrap. The verandah from the ….lounge, which is what Mrs Randall occupied – because the servants had the rest of the downstairs – but the big lounge at the front went through French windows onto the big balcony where there were tables and chairs….and lemonade in the summertime. Beautiful it was.”

“Inside the house there was a dumb waiter. There was a thing at the side where you whistled…to get the people….to listen to you…there were electric bells where a little flag dropped down in my auntie’s kitchen so she knew where they wanted her….”

“Coming down Ox Lane, we come to the bridle path which is still there. It runs into the school playground now. It’s beside 48, Ox Lane. Top of the bridle path coming from the nursery was a water tower…..wasn’t high enough to gravity feed the water so they had to build a water tower. That wasn’t so big as the one behind our bungalows though.”

“Claire Cottages were next. No, they weren’t to do with Randalls. They were built by the Claire Trust or something….”

“Mr Pollard the foreman lived at 91, Ox Lane. His house had a diamond and a flower motif on the front. At 93, was Mr Hereman – the manager…97 was Mr Moreland’s….bees….rode motor bikes…made gliders in his garage….used to tow them to Dunstable to fly them….no, not Randalls!”.

“Opposite 93, Ox Lane is Oulton Way on the original entrance to the Nursery. It was a metalled road…Mr Seaman, the chargehand lived at 88, Ox Lane. Now, Wroxham Way is new. The old entrance for the workers was next to the Railway”.

“The Buildings were prefabricated at Edgeware by a big firm named “Duncan Tucker”….they used to come and measure and go back and make up in little sections then come and assemble it. Randalls did the foundations and the brick work and fitted glass…The last greenhouses were built in 1935. They had their own water pumping station…..that was two gas driven engines where you used to push a lever and the belt used to change over from the free wheel to the main drive….Oh not mains – a big deep well. You would climb down it and the pumps would be in the base…ordinary pumps – piston type – not the fan type like today…… 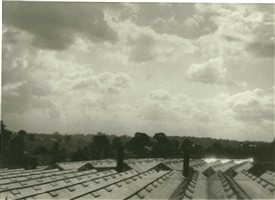 [Windygates] had Mains water and for the car wash. And of course there was water laid on…round the garden to keep all this grass lovely – it was like a billiard table! Yes, we had tap water from the Main…..Of course this water…they pumped wouldn’t be fit for drinking”.

“The furnaces were along here…..they were fed with coke and steam coal…they were all double boilers and there were two boilers to each stoke hole….and the pipes went under the little road into the greenhouses. This coal wouldn’t burn on house fires ‘cos we tried it! The chimneys had to be very high…about 14 feet high…the chimneys were. Then there was the incinerator. That held about 5 cubic yards….The kiln…another great big brick oven where the earth was taken up and put in at the top and there was a coke fire burning inside that. They used to cook the soil for 24 hours… to sterilise it…then there was steaming. That was done with a great big steam engine, horse drawn…In the winter time this was done. They used to force steam into pipes with little bore holes in it – in the soil. They would steam each house for 24 hours, and then move along to the next one, to sort of fumigate….The kiln did so much soil, then during the winter they used to steam as an extra precaution.”

“There were the tramways, or railway. The track would be assembled on the internal roads. The steam winch would be operated by the steam engine…[used] for steaming the greenhouses. The trams were used to empty soil from the greenhouses and be winched up and taken to a big heap outside the kiln…Then of course there was the soil clamps. This was made by building box shaped containers by using turves from building sites [because] there were no houses built round here then…They used to build these great big clamps as big as a house. 12” soil, 12” manure, 12” soil; then there used to be lime and bonemeal and when they used to cut it open in two years’ time, it used to be all lovely!”.

“There were two shire horses and two carts. The wheels were changed from wood and iron tyres to balloon tyres during…or just after the war… Later on a lorry was added to the transport section. Mr Grant of Station Road drove one of the horses and Mr S….Cox drove the other horse called Punch. Of course they used to go to Charlie Lines…which had a forge at the side of the thatched cottages for shoeing”. 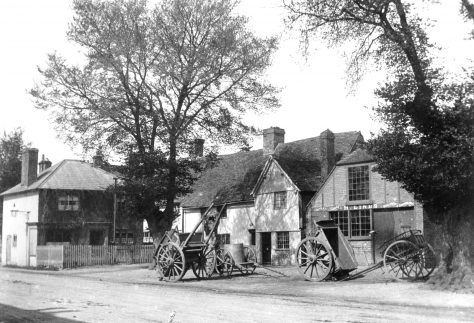 – About a winter’s night:

“Now this will give you some idea of what the situation used to be on a real winter’s night. They used to employ a night stoker who used to go round all these stoke holes with his hurricane lamp and when he got to the end stoke hole, he would stop and start again. But on very frosty, windy nights he couldn’t maintain the temperature so he’d have to call out – well it was Mr O’Dell who used to do it – and he’d call his brother-in-law out and that would take them all night just to keep up the temperature. Because by the time they’d finished – with the high draught and everything….at one end, this one was getting low again. It was a full time job. That’s the Mr O’Dell who lived in No.1 bungalow and Mr French lived in No.2 and Crumplins lived in No.3 – that’s us…”

“The hours they worked – this is summertime hours – 6.30 to 8, then Mr French used to ring the bell at 8 o’clock. They would have half an hour for breakfast…then ‘til 1 and then from 2 o’clock to 5 [they started at 7am in the winter]. The employees came from Codicote, Kimpton, Wheathampstead and the Folly – all the way round…on a summer’s morning they had to leave home about 6am. [Mr French] was the timekeeper – and a Nurseryman. He was responsible for ringing the bell at the start of work and finishing. There was a time office where you put your card… 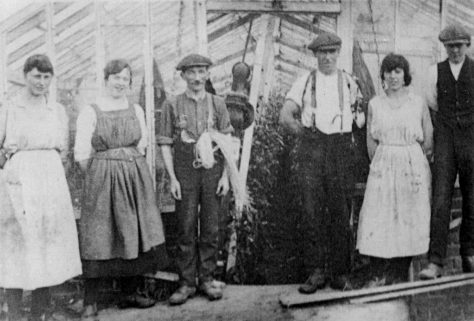 There was easy 50 people. They had a football team, Ox Lane Nurseries United, which used to play. Cricket too, but I don’t remember that so much…This bit was sold off to the school [Manland primary school and Sir John Lawes School] …they had a big iron fence all round it…a little hut here for the tools…the boys used to dig allotments there. Mr Eyles, the caretaker from Victoria Road used to come down. That was all field in front of our bungalows…the haystack was near us. The hayfield went both sides of the footpath, right over to where there was a hedge at the back of the Manland Way gardens. There were allotments there for the staff”.

“Mr Gatwood’s house [Mr Gatwood was another chargehand] was right at the bottom of what we called the yard where the storm water used to come down off Ox Lane. His house used to get flooded, unfortunately. Next door to him was the packing shed, and then the carts were kept in the next space. Then opposite the packing shed was the stable”.

“[At the station, Harpenden East]…. there used to be a covered loading bay and just one open one. But that wasn’t how the tomatoes went! This was how the manure came: Newmarket to Cambridge, Cambridge to Welwyn, then Welwyn to Harpenden. All the vegetables went on the L.M.S. straight to Covent Garden to George Monroe. Fells used to come and collect their tomatoes”

[There were signs in the early 1950s that things were changing: greenhouses were not being repaired; nothing was being replaced. Mr Crumplin senior died in 1954 and his widow left the bungalow in about 1957. Everything was sold]. 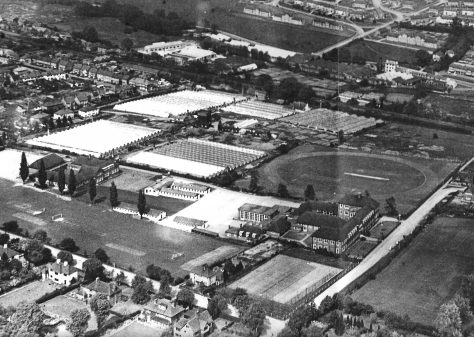