From an undated cutting in the Harpenden Free Press, late 1940s 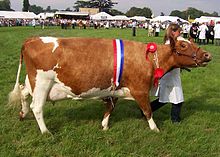 Since the Royal Show was re-started after the war (WWII) one of the most successful farming families competing has been William C Blair and Son of Annables Farm, Kinsbourne Green, Harpenden. The Annables herd of pedigree Ayrshire cattle has won ten first prizes and eight seconds in that period, and the Blairs’ latest first – for a heifer in milk – is the third they have won in that class.

For 362 years Mr William C Blair’s family, on his mother’s side, have been on the same estate in the West of Scotland. He moved to Harpenden 18 years ago, and has continued in the tradition of breeding Ayrshires, which the Blair family has done “ever since they were called that.”

At Annables the Blairs have bred a number of prize-winning animals, which go all over the world. Twice in recent years an Annables-bred animal has won the Supreme Championship of South Africa, and another animal in the Annables line won the same trophy two years ago.