You are here: HomenextHarpenden HistorynextTopics - from Archaeology to WartimenextFarms and FarmingnextThe Demise of the Dairy Industry and Changes in Land Use in the Harpenden Rural area

The contribution of Scottish farmers

Land use on the Slip changed dramatically after the Second World War (WWII). Up to that time the heavy clay soil, the presence of a high water table and the attendant wetness factor had precluded traditional arable farming as carried out in the rest of the county. Thus the great majority of the clay slip was devoted to permanent pasture and the production of milk. 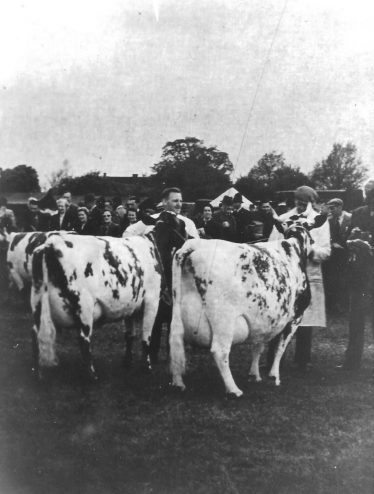 As tenancies became available in the depressed years of the 1920s and 1930s English farmers skilled in arable agriculture were not attracted and tenancies were taken up by several Scottish and Welsh farmers. Some came by rail with their herds and equipment. All had the required dairying skills. The farms for the most part became highly profitable and the tenancies were bought out whenever possible.

After the war there was a time of dramatic change in land use. Several factors influenced this. With an increasing urban population came an increase in the extraction of potable water from the chalk aquifer. Water table levels dropped and the clay slip became drier. Wetness became less of a constraint on soil tillage. Labour costs escalated and availability decreased.

High horse power tractors became available to work a heavy clay soil. The economics of arable farming vis-a-vis dairy farming became ever more attractive and with it the era of intensive farm mechanisation dawned on the clay slip.

With the change in land use came a dramatic change in the general landscape and its various components, miles of hedge rows were grubbed out to increase the efficiency of machinery and reduce general maintenance costs. With the removal of the animals insect life plummeted with the attendant bird life, especially the population of swallows and martins, and plant life became much less diversified.

With the increase in urban population in Harpenden and the surrounding villages an increased pressure to provide new housing (the Annables estate of thirty two houses is a good example – started in the 1930s and continued in the 1950s). New leisure facilities, notably golf courses at Hammonds End and Harpendenbury (Redbourn Golf club) were built, and fields between Kinsbourne Green and Roundwood Lane were developed. 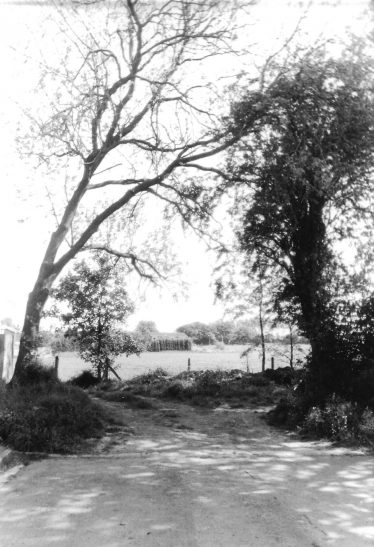 But who were these settlers from the North and the West – the Stovins at Harpendenbury, the Weirs at Redbournbury, the Whites at Hammonds End, the Cattons at Faulkners End, the Blairs at Annables, the Beales at Lady Bray, the Dunns at the Kennels and the Pierces at Pepsal End – and what has become of them? 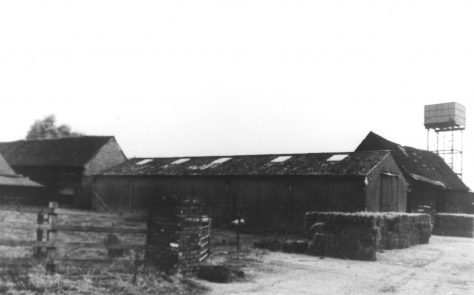 Mr William C Blair brought his herd and implements down from Ayrshire by rail, and took over the tenancy of Annables Manor in the 1920s. His herd of pedigree brown & white Ayreshire cattle won prizes as noted by the Harpenden Free Press in the 1940s. His son Sandy took over the farm in the 1960s, by which time the water table had dropped and he started ploughing the pastures to grow grain crops. He was unmarried, with no heirs, and moved out of the Manor house into a cottage, selling Annables Manor to the Campbells. 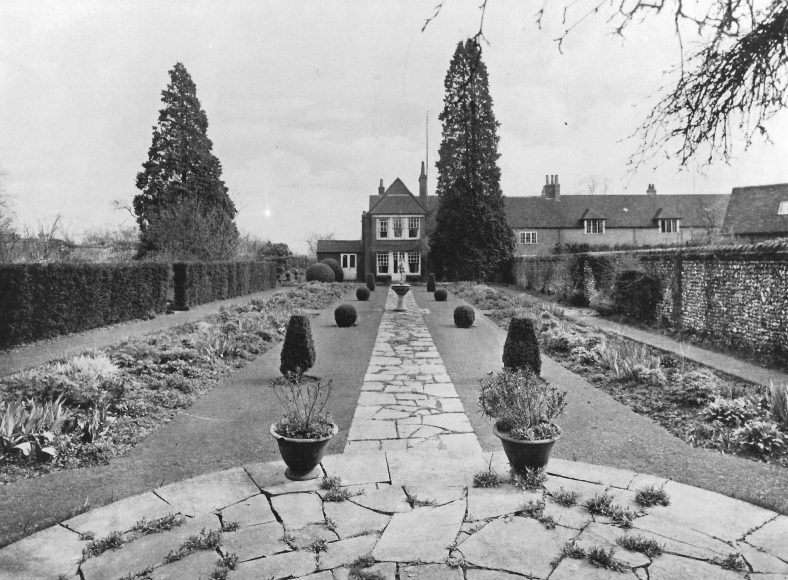 Taking over as Lord of the Manor from his father, Sandy Blair was responsible for Kinsbourne Green Common – clearing snow from the access roads, and dealing with periodic Gypsy encampments. A deep trench was excavated around the perimeter of the Common to prevent access. Over subsequent years the bank of spoil thrown up on the side became colonised by a rich variety of flora. The Common, which had been treeless, is now, some sixty years later, enclosed by a very fine line of oaks and ash trees. The Common yields an annual crop of hay now taken by the Pigott family, the present Lords of the Manor. 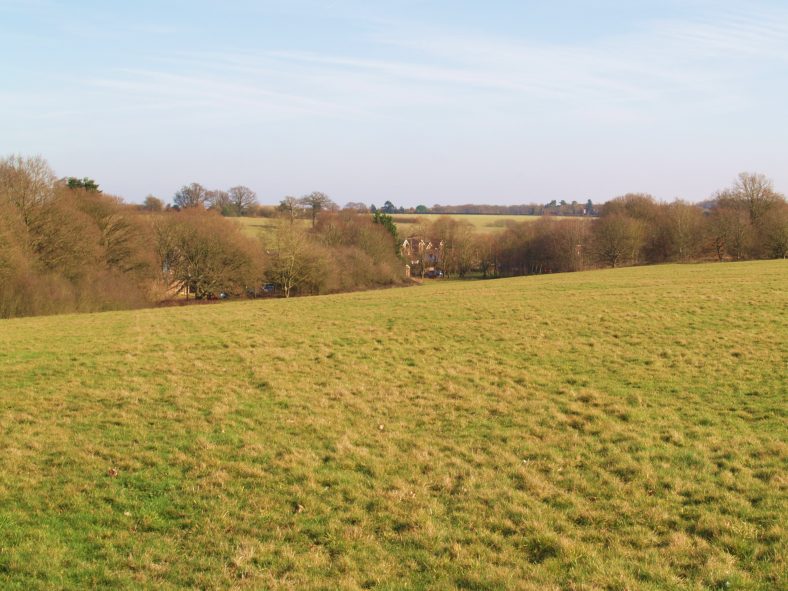 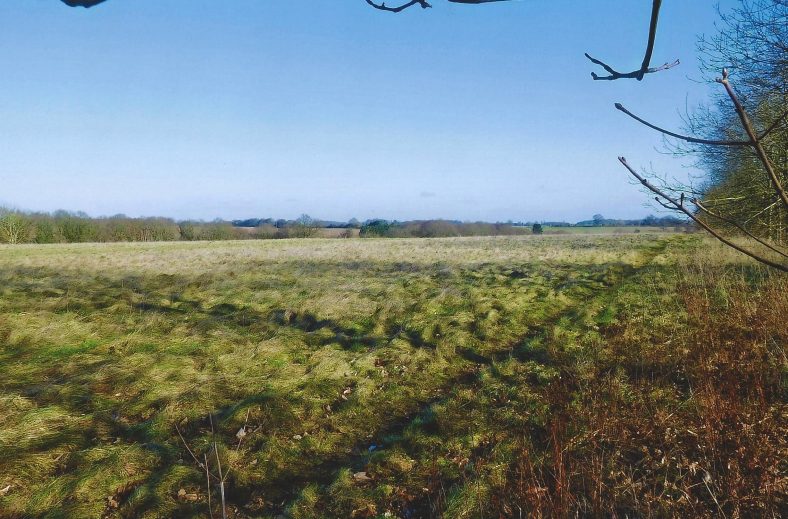 The Friars Wash Point-to-Point Races (fully described by Eric Edwards in a monograph published by the Flamstead Society in 1996) had taken place intermittently since 1890, particularly between 1926 and 1964. The course started and ended near Annables cottages, through the meadows on either side of the river Ver. Associated Hertfordshire Hunt events and meetings of the Aldenham Harriers took place in the same area and had attracted gentry and other celebrities.

Race meetings were held by the kind permission of the owners of Harpendenbury, Turners Hall and Annables Farms – with Annables owning a large part of the course. When Sandy Blair started to change from dairy to cereal farming, it was not tenable to have a race course on land devoted to crops. 1964 saw the last Hertfordshire Hunt event at Friar’s Wash, and the Hunt and the Aldenham Harriers found new venues.

After Sandy Blair’s death the land was sold to the Pigotts and amalgamated with Thrales End Farm – with Ian and John Pigott taking over the duties of Lord of the Manor. A recent innovation at Annables has been the creation of a farm school, an educational project designed to introduce farming practices to young people. All the barns and byres at Annables became redundant, with the barn being converted to residences and two large houses being built on the farmyard. 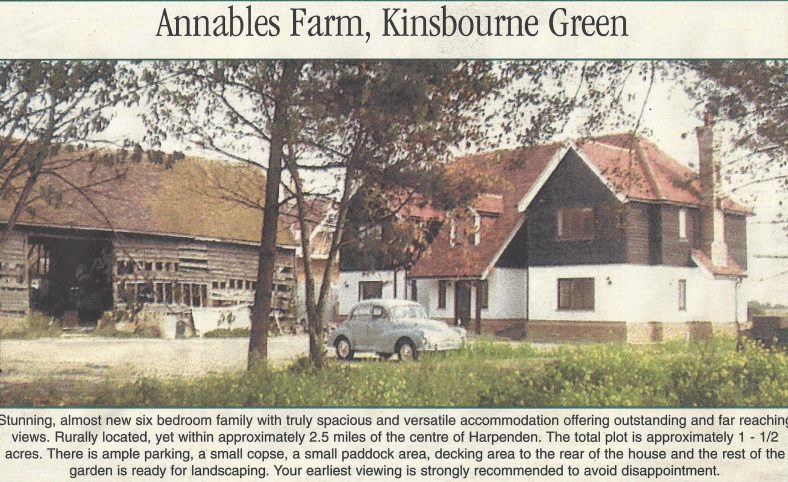 Advertisement for one of the houses in Annables farmyard. Credit: Cutting in LHS archives – LHS 11838

The Stovin’s dairy farm at Harpendenbury has become Redbourn Golf club, and the farm buildings are a conference centre. 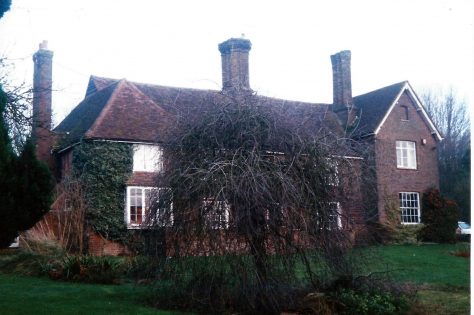 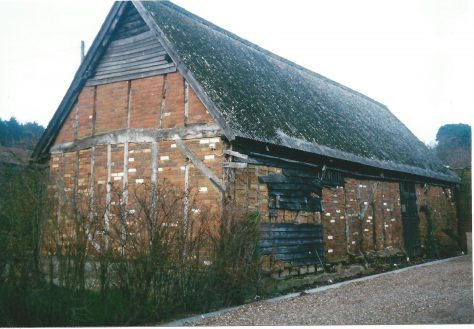 The Weir family took up Crown land tenancies at Redbournbury in the 1920s. Milking ceased in the 1980s and the tenancies have been taken up by other farmers.

The Cattons at Faulkners End also arrived from Scotland in the 1920s – hearsay has it that they unloaded their stock of cattle from a siding on the Nickey line. They currently run a livery at Faulkner’s End and the land is contracted out for cereal farming. 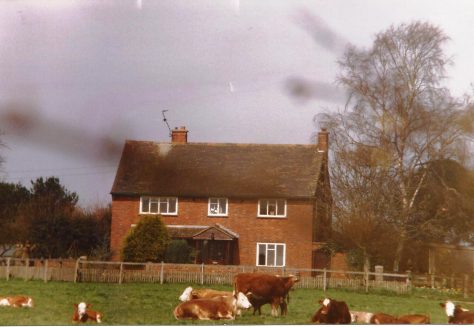 Also on the Slip, the Pierce family at Pepsall End continued dairy farming until around 2010. They continue to run a beef herd on the pasture land with the remainder of the farm devoted to arable crops.

The Beale family ran a large milking herd at Lady Bray Farm until around 2000 when they sold it to the Cattons. Part of the farm has been developed as livery, and the remainder is contract farmed. The Beales moved with their herd to the West Country. 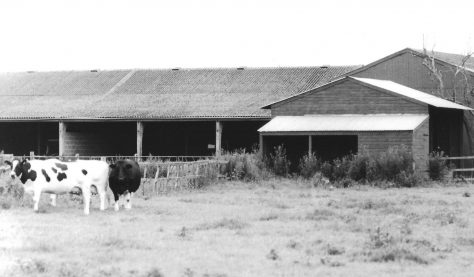 The Kennels had been the home of the Hertfordshire Fox Hounds, who had hunted this part of the county up to the start of WWII. Whip Cottage on Luton Road was a small pub in the nineteenth century, along with The First and Last pub, further north, which was demolished in the 1950s. At Kennels Farmstead the Dunn family, tenant farmers of Luton Hoo, ran a large herd of Frisian cows until their retirement in the early 1970s. All the byres and milking parlours have been converted into residences. 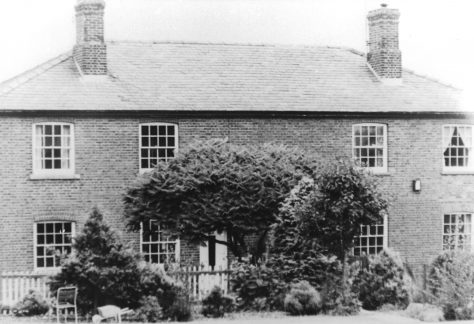 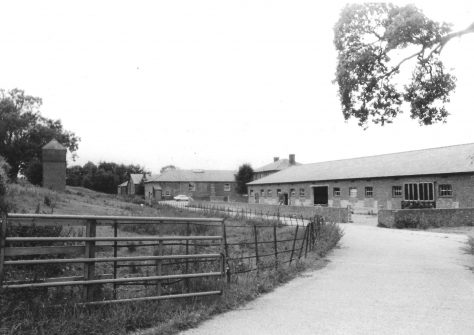 Spring Road and Chamberlains were developed as the Annables housing estate in the 1930s, when the Blairs were delighted to sell off this particularly wet area. The Red House, White House and High Ridge were built from 1937. Building stopped with WWII, and in the 1950s and 1960s the remaining plots were built on – 32 in all. Hopes to build a large estate stretching to Kennels Lane were blocked by Green Belt designation.

A period of great change

Over a period of some seventy years there has been a dramatic change in farming practices, with fewer farming families still involved. Farm buildings no longer needed for livestock have been converted into housing. The animal, insect, bird and plant life, which had thrived amongst livestock, has declined. The countryside has perhaps become less interesting to the casual observer – and more sterile.

What does the future hold? The ploughing up of permanent pasture releases a great reservoir of soil fertility, of great benefit to the subsequent arable crops. But there is increasing evidence that this fertility has now been depleted to varying degrees. There is some scattered indication that animals are making a return to the landscape of the Slip. They would be greatly welcomed.

* Bruce Campbell is an agriculturalist specialised in sugar cane production. He retired from Tate & Lyle in 1993 and has resided on the Annables estate since 1964.

By Rosemary Ross and Bruce Campbell*