Traces of Rabbits in Harpenden and Wheathampstead

Farmed for food for the gentry

This article, which first appeared in Newsletter 130, December 2016, discusses the surviving evidence for the breeding of rabbits in the district in late medieval times as reflected in field names.

The European rabbit (Oryctolagus cuniculus) is not native to Britain or Ireland. Butchered rabbit bones found in a secure archaeological context at Lynford in Norfolk confirmed that the rabbit was introduced, probably on a small scale, by the Romans. The rabbit did not survive into the post-Roman period; there is no word in either the Celtic languages or Anglo-Saxon for the animal prior to its reintroduction in the years after the Norman conquest.

At the time of its (re)introduction early in the 12th century the rabbit was a rarity. It was eaten as a delicacy and its fur, especially the black and ‘silver’ varieties, was used for trimming the clothes of those who could afford such luxury. It could live on poor vegetation and did not need a constant water supply as it got most of its water from its food. Rabbits avoid damp living conditions and prefer to burrow into sloping ground as the spoil falls away.
These characteristics and the need to protect the valuable rabbits from predators led to the construction of earth mounds in varying sizes. These were originally called ‘clappers’ or ‘claperies’, apparently from the French word for a mound built from earth and stones. They were intended to provide a safe environment for the breeding does and the young. They also facilitated capture using purse nets across the burrows and a ferret to flush them out.

Rabbits were originally called ‘Conies’ from the Latin cuniculus. As cony was pronounced to rhyme with ‘honey’ its unfortunate similarity to the diminutive of a particular ‘anglo-saxon’ four-letter word led to a change to rhyme with ‘pony’ and it was eventually replaced by ‘rabbit’, a term that was at first used only for the young of the species.

The term ‘warren’ – now used to describe anywhere that rabbits live – derived from the law of ‘free warren’. Under feudal law only the monarch had the right to take game and others could only do so if granted the right of ‘free warren’ over a specific area, usually their own property. As the rabbit was a ‘beast of warren’ anyone with the right of free warren could breed rabbits irrespective of the damage to the crops of others caused by strays.

In other parts of the country large scale rabbit breeding took place on areas of lighter or poor soils such as the East Anglian Brecklands, Dartmoor, the Brecon Beacons and the various ‘wolds’. These large-scale warrens, utilising large constructions now known as ‘pillow mounds’, were not common in Hertfordshire. Anyone interested in the history and archaeology of such enterprises and the history of rabbits should read Rabbits, Warrens & Archaeology by T. Williamson, Tempus Publishing, 2007.

Sites in Harpenden and Wheathampstead

All the sites noted below are adjacent to substantial properties with known or likely manorial origins, with the right of free warren probably granted by Westminster Abbey on their creation. Other similar properties in the parishes such as Hammonds End, Harpendenbury and Mackery End probably had similar ‘clapper’ sites but they may never have had a separate name, or the name has not survived. When they fell out of use the mounds would have been levelled, leaving no physical evidence.

Rothamsted
The Manor of Rothamsted and its Occupants, by D H Boalch, (Rothamsted Experimental Station, 1978) includes a reproduction of a plan of the manor dated 1623 (plate viii) which shows an area to the west of the house called the Couygre. 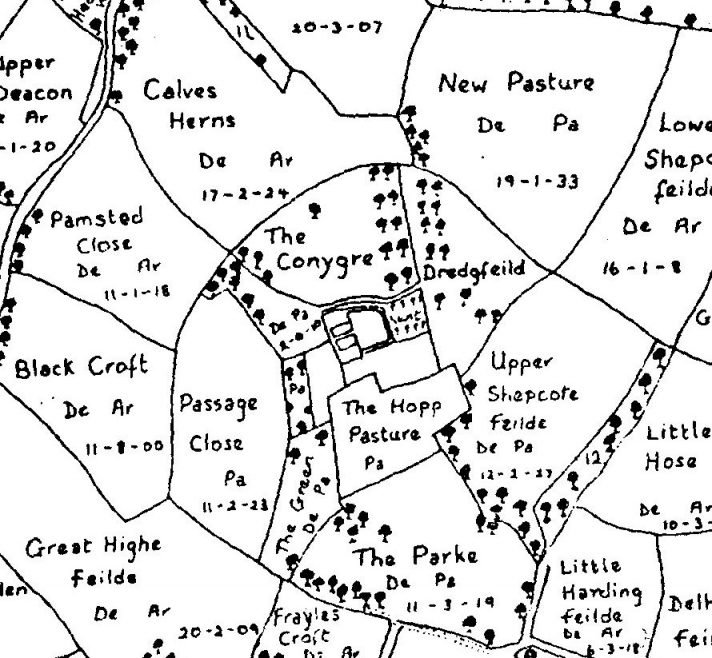 Extract form “The Plot of the Demeanes of the Mannor of rothamsted”, 1643 – showing Conygre to the west of the Manor House. NB West is at the top of the map. Credit: scan from printed copy in LHS archives

An inventory of the same date (reproduced therein, page 3) does not mention rabbits and the moat on this side of the house, which may have been built to contain them, is in bad repair. This suggests that rabbit breeding had been abandoned.

The usual spelling found on old estate plans and in documents is ‘Conygre’, an abbreviation of ‘Coney-garth’ derived from the old English word for clappers.

‘The Warren’ Wheathampstead Tithe Awards 959. A field on the north side of Lamer House between the house and Lamer Wood.

Causewell Farm
‘The Warren’ Wheathampstead Tithe Awards 329. A field on the north side of the Lower Luton Road opposite Causewell Farm. It is now covered by Manor Road. I am indebted to Anne Rowe for this location.

Cross Farm
‘Clappers Mead’ Wheathampstead Tithe Awards 682. This field is now part of a large field lying between Ayres End Lane and the bridle path from West End Farm to Cross Lane/Pipers Lane. Walking from Pipers Lane, pass the sharp kink in the path; the wood to the right (abutting Ayres End Lane) is Clappers Wood. Clappers Mead lay between Clappers Wood and the bridle path.

Any clappers here may have belonged to either Cross Farm or the medieval house that once occupied what is now Thames Wood. This house (remains of which were found by the Archaeology Group of the St Albans and Hertfordshire Architectural & Archaeological Society) was probably the manor house of the Manor of Tame.

In this writer’s opinion, Clappers Wood may also be the site of a medieval house, with the Clappers sited next to it.

Lower Top Street Farm
A warren near the farmhouse of Lower Top Street Farm (at the corner of Crabtree Lane and Topstreet Way) is mentioned by Dorothy Vinsen. (Some Reminiscences of Dorothy Vinsen, H&DLHS Newsletter 34). She was born in 1907 and tells of watching rabbits in a warren located in a dell ‘behind the gasworks’ before 1919. The gasworks in question was located between the railway embankment and modern Marlborough Park at a lower level than the farm house. None of the fields between the farmhouse and the gasworks site as named in the Tithe Awards schedule show any connection to rabbits. The most likely site was Kitchen Close, Harpenden Tithe Awards 1081.

Two tenuous connections
‘Clap Post Field’ Wheathampstead Tithe Awards 597. Adjacent to Wheathampstead Bury Farm, this field is the last open ground on the left as you approach Wheathampstead from Harpenden on the Lea Valley Walk.

‘Clapgate Field’ Adjacent to Townsend Lane, so named in the Harpenden Tithe Awards, 337 & 338. This was the site of Claygate Orchards and, since 1955, part of Claygate Avenue. ‘Claygate’ was probably the original name which was mis-spelt by the clerk who drew up the awards schedule.

Piggotts Hill Farm
Piggotts Hill Farm (alias the Manor of Piggotts) was put up for sale by auction in 1866. The auction particulars and plan (HALS DE Ha 75950) show that the part of the property enclosed by Dark Lane, Wheathampstead Road, The Greenway and Grove Road was then divided into 3 fields; Great Coney (31 acres), Little Coney (5 acres) and Coney Mead (1 acre). Coney Mead is now the site of the Childrens’ Clinic and Grove Road School covers Little Coney.

These names are not, however, medieval relics. In 1698, when the property was bought by Thomas Ashby, the above fields had different names with only one very tenuous rabbit connection; Snare Croft. The Netherfield (21 acres) and ‘a close called Snare Croft’ (10 acres) equated to Great Coney. A ‘parcel called 5 acres adjoining Netherfield’ became Little Coney and ‘a little mead of 1 acre between Netherfield and a lane from Harpenden to Hatfield’ became Coney Mead. (Indenture dated 7 May 1698, HALS DE CM 38137). The lane is now called Grove Road.

These fields are remote from the manor house and farm buildings, which lie on the other side of the Wheathampstead Road, and any clappers would have been sited close to these buildings. It is remotely possible that Coney Mead (alias Harpenden Meadow) was the site of a house in the early medieval period but there is no trace of it on maps or in records.

Changes of field names over time were not unusual in freehold properties. Although Piggotts Hill was originally a manor, there were no copyholders in 1698 and the whole was, in modern terms, freehold. No court rolls are known to exist for the manor. The field names may have been changed by Joseph Gutteridge of Denmark Hill in Surrey, who bought the property in 1793. According to his biographer Gutteridge spent his summers at Piggotts Hill for the next 20 years*. The auction of 1866 noted above followed the death of Gutteridge’s widowed and childless daughter.