The tower of the Parish Church on Church Green is Harpenden’s oldest building, being some 500 years old and for a large part of its life has had a clock. One was there in 1690, as records state that it was oiled then, and in 1740 it got a new face. More ‘oyl’ was needed in 1812 and by 1851 it was necessary to put in a new clock. This is the one we have today, but the mechanism has been much modernised. Life must have centred round this clock in days gone by but as the trees in the churchyard grow it becomes less visible. 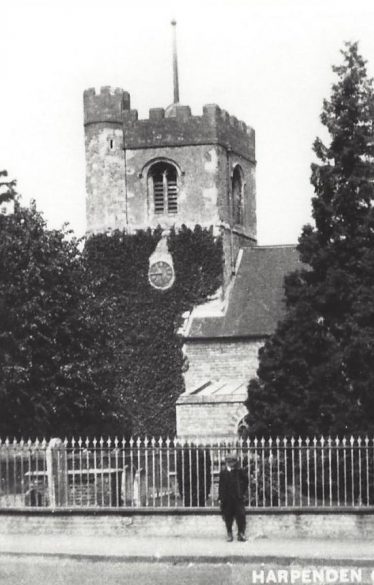 Town Farm at Wheathampstead was farmed by the Chennells family for 400 years and a clock was mounted on a barn for use of the farmworkers. When Mr Jesse Chennell died in 1901 the clock stopped and was removed and taken to Gibralter Lodge at Batford (behind the Gibralter public house) where it was put in the end gable wall overlooking the river valley. 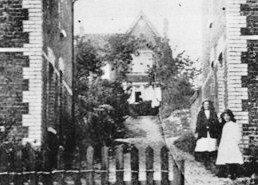 Entrance to Gibraltar Lodge with clock in the apex, overlooking the valley. Credit: LHS archives

When the family left, the clock went to Collins Antiques in Wheathampstead and by fate, was stored in a barn at Town Farm which they rented. Captain Hadley of Gibralter Lodge had moved in in 1951 and heard of the clock, bought it and had it restored and fitted back in the wall where it started in use again in August 1954. The house was eventually demolished and new houses built on the site.

Rothamsted Manor has long had a clock tower.  The present one was removed in July 1978 and taken to Putterills, the local timber merchants, where it was rebuilt, ready to be craned back into position and reunited with the clock (said to be 112 years old that year). 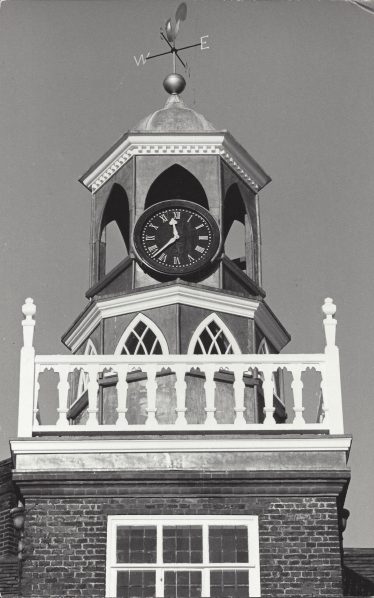 The clock tower at Rothamsted Manor, after restoration in 1978/9. Credit: LHS archives – LHS 1204

What is now Aldwickbury School was originally ‘High Firs’, built in 1871; it took its name from the fine trees in the grounds. There is a large clock on the tower over the doors at the stables which could be seen from the gardens. 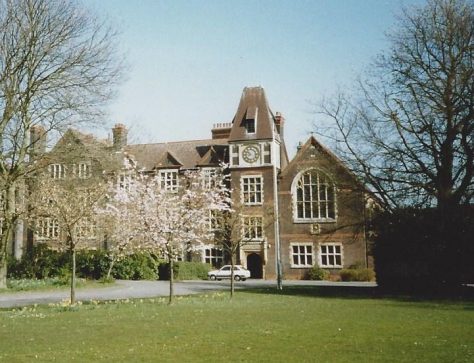 St. George’s School was opened in 1907, but the building dates back to 1887, and the main entrance to the school is in the bottom of the clock tower.

A Sanatorium for children with consumption was built in 1909 in Ambrose Lane, and known later as ‘Elmfield’, part of the National Children’s Home complex. It became The King’s School when the NCH closed in the mid 1980s  A central feature was the bell turret, but instead of a clock on the gable end, it had a sun-dial, around which is the motto “Time hastens, therefore do today whatever kindly deed you may”. At the Oval, the main part of the NCH, and Youth with a Mission (YWAM) since 1985, the administration block was built in 1913 and houses a clock which is positioned to serve the whole complex. 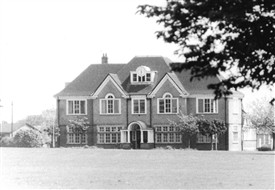 A clock was put on the Cricket Pavilion on the Common, in memory of the Club Treasurer, L.J. Seerby (1948-1954), and was installed in August 1957. It had shutters over it for protection when not in use. 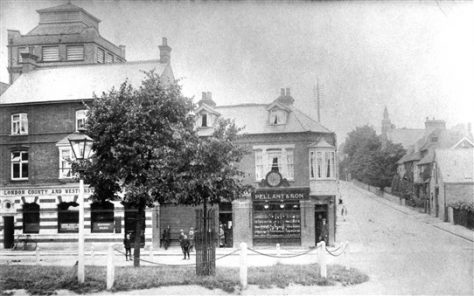 In the High Street was Pellants, jewellers and clock makers, at the corner of Vaughan Road and High Street. They opened a new shop here in 1898 and had a clock on the corner facing the High Street. It was worn out in July 1938 and removed, much to the annoyance of local shoppers, and was soon replaced. Pellants closed in August 1964 and the clock disappeared 18 months later. 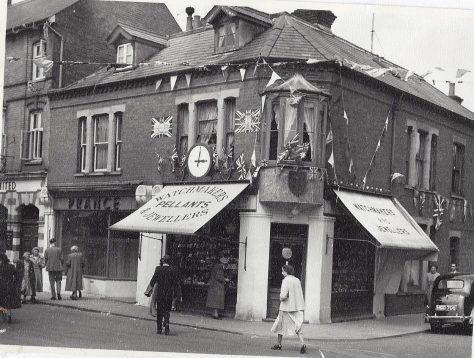 The owners of the toyshop which followed (District Modern Toys) put up a new electric clock in December 1967 made by General Signal and Time Systems and was two foot nine inches square and 7.5 inches deep. It was not very reliable however, and was soon noted for telling the wrong time. It finally expired and stayed for many years showing the same time. 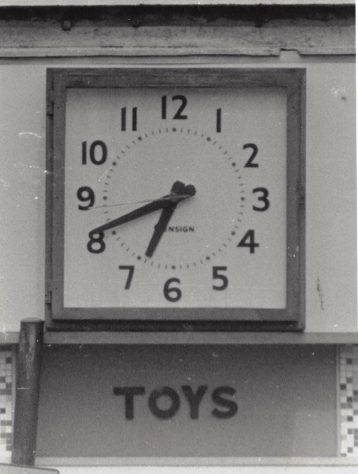 Salvesens, estate agents in Station Road, built new offices in 1932 and later called them “Clock Offices” when a new clock was fitted in 1937 on the gable, and visible up and down Station Road. It latterly served as an advertisement sign from 1971 as it kept failing and was too much trouble and expense to keep going, but has now been removed.

Brewery House in the High Street (now W.H. Smith) was converted into shops in 1954 and a Mersey Design clock 24 inches square and 16 feet above ground was put up in a very prominent position over the High Street. Sadly this was also a poor time keeper that is, when it worked at all! 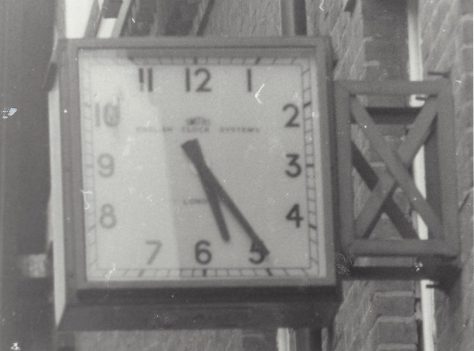 The Cloisters in Grange Court Road was formerly the stables built in 1906 for the Grange and a clock was fitted in the end wall facing the yard and had a large face. Above it stood a Belvedere Tower with a bell worked by a rope. It was still in working order in 2004 although the owner found it difficult to get up the narrow staircase to wind it. 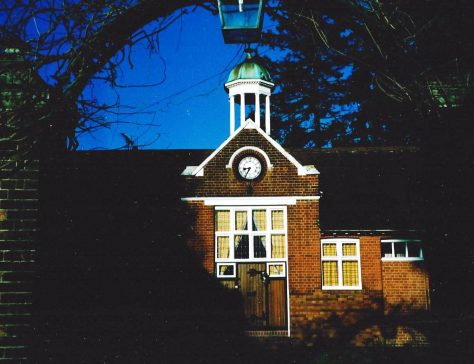 A parade of shops was built on the corner of Piggottshill Lane and Grove Road in 1954 where another Mersey Design Clock fitted but again served little purpose as it rarely worked. 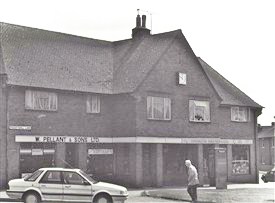 At last – a reliable timekeeper

After many years without a reliable clock in the High Street area, the Town Council and C & A The Ironmongers jointly funded a magnificent  three sided clock fitted to the corner of their store on 18th December 1990 – a good position, which serves the High Street well. It is currently maintained by M&Co. 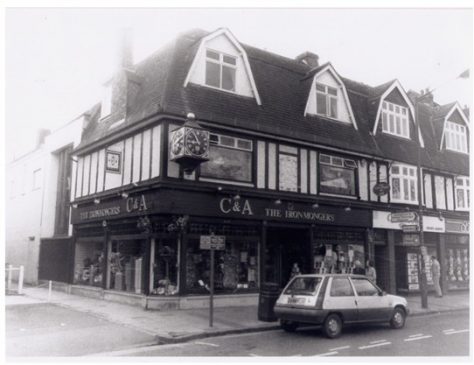 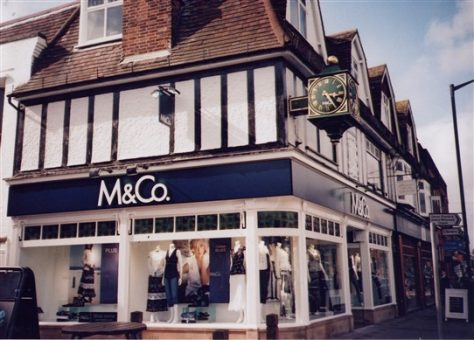 Another public clock was provided at Harpenden Swimming Pool. It came from Courtenay Davis who used to have a shop in Station Road selling electrical goods, gifts and a record department. The clock had ‘Courtenay Davis’ printed on the face. It was stolen from the pool and has not been found. 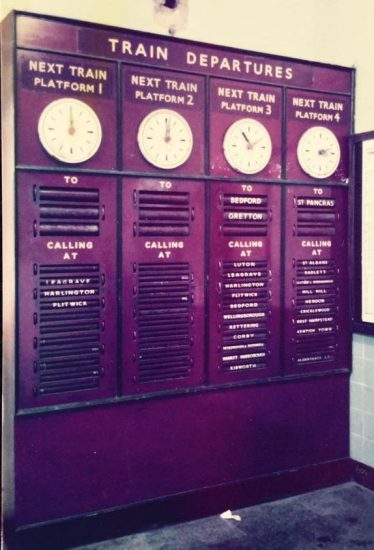 Finally, at Harpenden’s main line railway station, a new destination indicator was erected in the booking hall in August 1962. Consisting of four panels, one for each platform, it had manually operated clocks at the top which were set to indicate train times, and rollers for each destination which could be revealed or hidden according to where the train was scheduled to stop. This wondrous contraption survived until December 1982. Meanwhile the platform clock which had served the station for many years was exposed to the weather when the station roof was removed in 1966 and stopped working soon afterwards, and for a long time there was no clock visible to the public.

Transcript of a document in the LHS Archives: with amendments