You are here: HomenextHarpenden HistorynextTopics - from Archaeology to WartimenextPublic services - fire, waternextHarpenden Fire Brigade and Auxillary Fire Service in WWII

Can you add any more names?

See below for group photo enlarged and with participants numbered

Scroll across and up and down to view all the photo.

Names and information supplied by Colin Gaskin are listed below.

enquiries@harpenden-history.org.uk and we will add it to this page

Other information added as received

1 – Charles William BATCHELOR – lived at 5 Glemsford Drive – a bricklayer by trade and a despatch rider in the Fire Service. Sometime worked for Jarvis and Claridges, also played for Harpenden Rovers pre-war. (Information from his son Bill Batchelor 5.9.15)

7 – very uncertain about this individual but it might have been a ? SEARS who lived in Amenbury Lane.

9 & 11 were the BENTLEY  brothers – sons of Frank Bentley painter and decorator High Street next to Chambers Hairdressers. Confirmed and named by Martin Bentley, their nephew.

13 – might have been Peter WAINWRIGHT leader of Section 3 – manager of National Provincial bank at the corner of Station Road and Lower High Street. Lived in Park Mount area and post WWII moved to Dunstable – became mayor of Dunstable.

20 – ? PEARCE worked at Reads garage and lived in southernmost of the Bowers Cottages before they  were demolished to make way for the new car showrooms.

41 – might have been Mabel READ attached to Section 3 – one of the daughters of Read the garage proprietor.

52 – Archie SMITH – Deputy Leader of Section £ – owner of grain merchants next to the Cock public house – lived in Townsend Lane.

59 – Albert ASHURST – lived in Westfield Road area – may have become a paid regular fireman during WWII.

67 John or Jack WEST- son of West, baker, High Street.  John later served in the RASC and died as a Japanese POW in 1945.

72 George HYSOM – publican of the Rose and Crown public house.

76 – might have been Gordon BAINES – Lived in Park Mount area and worked at Westminster Bank – later served in Royal Navy.

77 – George HERRING – lived in Milton Road and was Captain of the brigade. 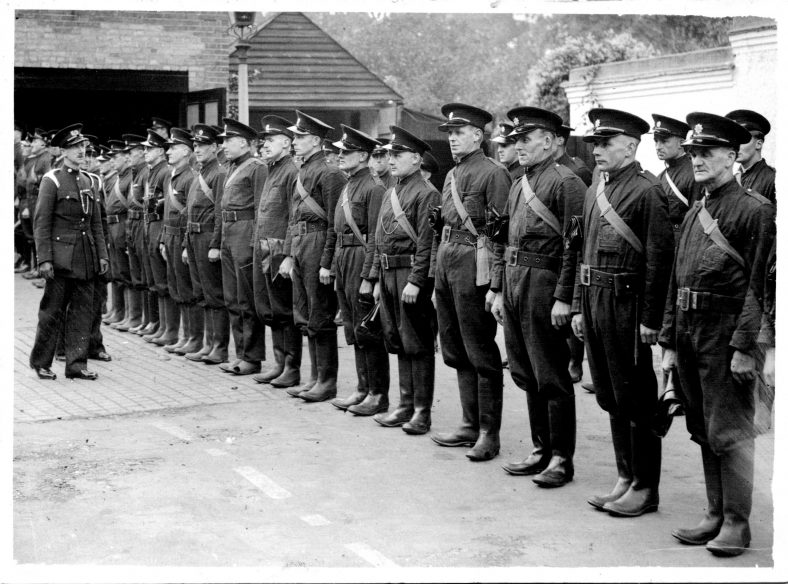 Names: front row from the right