Report in the Herts Advertiser - Scenes of 1879 vividly recalled 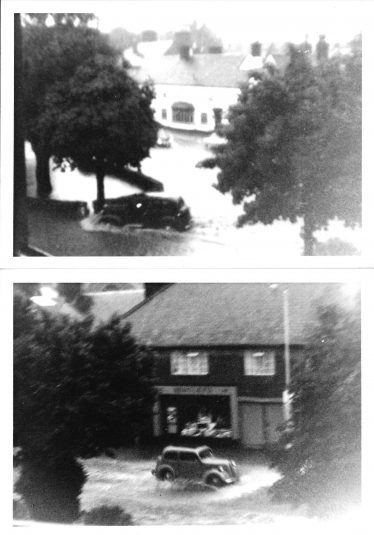 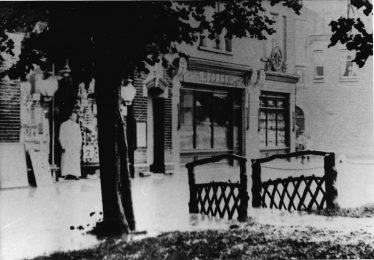 Transcription of a report found in George Herring’s book of Newspaper cuttings concerning the activities of Harpenden Fire Brigade.

Not since 1879 has Harpenden experienced a storm of such severity as that which broke over the district about 6.45pm on Sunday, when scenes occurred which closely resembled those of the night of August 2nd 1879, when, in the floods which followed the rains, animals and property were seen floating about, a man named Healey swam from the centre of the village to the gravel pit in Southdown Road and potatoes were washed out of the ground in the Rothamsted Allotments on to the Common.

On Sunday evening, a river was formed, apparently having its source in the ‘Cock’ Pond area, which in days gone by was the starting point of the stream which flowed down what is now known as Lower High Street. The trench which for many years carried the water to the pit in Southdown Road was replaced by drains, but these, as in many places, proved incapable of dealing with the torrential volume of rain and hail which, for a time, fell in such density as to resemble a fog.

Water flowing from the higher levels to the village added to the volume and it swept over Station Road, in the course of the old stream, and flowed into the pits which are used to carry the normal rain fall of the district. The pits were filled to overflowing, submerging Southdown Road and Crabtree Lane, while the Bowling Alley area was already battling with its own flooded thoroughfare.

The heaviest rainfall on Sunday occurred between 6.15pm and 6.45pm, when 1.500 inches (3.7cm) were recorded in 30 minutes, this representing 150 tons to the acre. It is also interesting to note that the wind at that time reached a velocity of 39 miles per hour.

At 7.08 pm a heavy fall of hail occurred. Dr Williams, at Rothamsted, measured some the largest of these hailstones and found many to be from 0.6 to 0.7 of an inch in diameter, a few of 0.8 inch (2.3cm) in diameter, and one or two not quite spherical with the greatest diameter of 1 inch. Several were weighed and registered about 16 to the ounce. The maximum temperature for Sunday was 81 degrees Fahrenheit, and for the previous day 82 degrees Fahrenheit.

The Meteorological Department at Rothamsted was itself a victim of the flooding, and the standard 8 –inch gauge from which the recordings were taken was flooded. …

So great was the force of the water that the sewers in the village were affected, and in several places manhole covers were forced off, and obnoxious water was added to the general flow. When the storm was at its greatest, the wind had reached a high velocity and, carrying with it, as it did, huge hailstones, it bore down growing plants, cutting lettuces and potato tops to pieces. …

The ravaging effect of the hail may be judged from the fact that the stonework bordering the Catholic Church in Rothamsted Avenue was afterwards seen to be scarred. …

Only a personal visit could convince some of the truth of the information that hail which had been borne from the higher levels on either side of Luton Road had gathered in the sunken garden of Mr E Adams [just north of the Nickey Line] to a depth of nearly two feet. There it remained for a long time, in spite of the warm temperature. 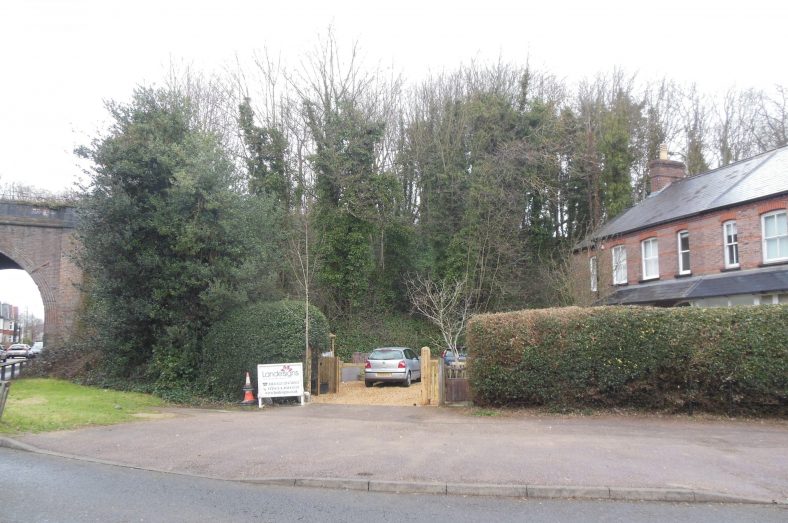 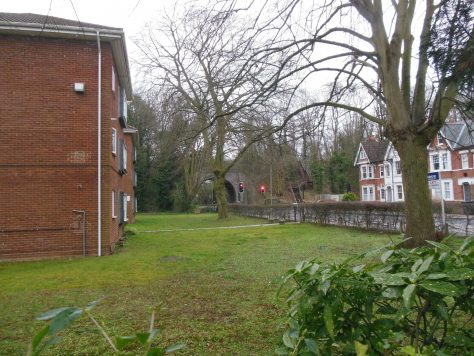 Hailstones as large as shillings and débris blocked the drains and other outlets which normally carry away the rain, and water rose in the Lower High Street to a depth of nearly two feet, flooding cellars which, in some cases, held stocks of goods belonging to tradespeople and involved hundreds of pounds of damage.

Soon after the storm had spent itself, urgent calls were received from business people and private residents who required the services of Harpenden Fire Brigade, in pumping out the water which had flooded their cellars. Both engines were out for several hours dealing with such cases.

At the shop of Mr J L Trustram, newsagent and stationer, at the bottom of Station Road, the water which was flowing between the adjoining premises of Messrs Gillow, Brading and Elm and the “Railway” Hotel at the rate of several miles an hour, entered at the front door and was quickly reaching a high level on the floor, which is below the road level.  Fortunately Mr Trustram was able to release most of the water by lifting a flap in the floor and allowing it to run into the cellar, but not until about £50 worth of damage had been caused to stock. 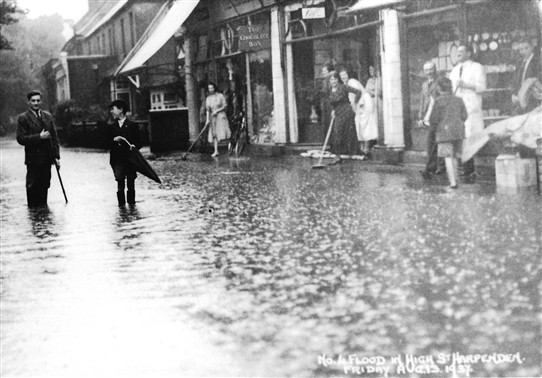 The shops in Lower High Street were similarly affected. Mr A J Harriden was soon busily engaged in trying to save goods in the shop itself, but the water had already filled the cellar beneath, in which a great deal of stock was stored, and involved him in damage estimated at between £400 and £500. The galling feature lay in the fact that the stock was not insured for such an eventuality.

The shop of Mr T Dunckley, adjoining, was little affected, but the land at the rear of his premises, and of others belonging to the shops fronting Station Road, was badly flooded, and the Brigade’s second engine was occupied in pumping the water into Station Road, where the drain gratings had been raised.

Forrest Stores Ltd, Station Road, were also flooded, but as the cellars here contained goods largely of an imperishable nature, the loss is probably not so great, although all the stock of butter and lard was affected.

How the Churches fared

The Parish Church, situated in a slight hollow, was flooded with several inches of water, and when the hail blocked the guttering of the South porch, the water found its way under the lead into the building, streamed down the walls onto the pews, and soaked the contents of the bookcase containing the church literature.

Gaining admission to the offices of the Methodist Church, the water flooded a storeroom to the depth of ten inches, and the organ and microphones were temporarily put out of action.  Members of the Methodist Chapel found themselves marooned, but Messrs A Saunders and Son came to the rescue with a pantechnicon and conveyed many to the unaffected parts of the district near their homes.

The afternoon fall of rain had flooded the Bowling Alley area to such an extent that children attending the Sunday Schools in St John’s Hall and at the Methodist Schoolroom had to be conveyed home by car.

The Brigade was also engaged in pumping water from the stokehold of Harpenden Dairies. Mr F N Gingell, the Manager, fearing that the water would reach for the boilers, had made an effort to descend the steps to the stokehold when he slipped on the hail-covered steps and injured his left leg.

In the Bowling Alley, and particularly in the vicinity of the “Rose and Crown”, the waters assumed a sea-like motion when the buses ploughed through them, but all other traffic had to take circuitous routes. By barricading the entrance to his shop, Mr E Ward contrived to prevent more serious flooding of his premises, but two feet of water gathered in the storeroom below, and this had to be pumped out, while at the same time engineers of the Northmet Company cut off the supply of electricity. The cottages in Grove Road were badly flooded and on the following day floorboards were taken up in order that the obnoxious water could be bailed out from beneath. 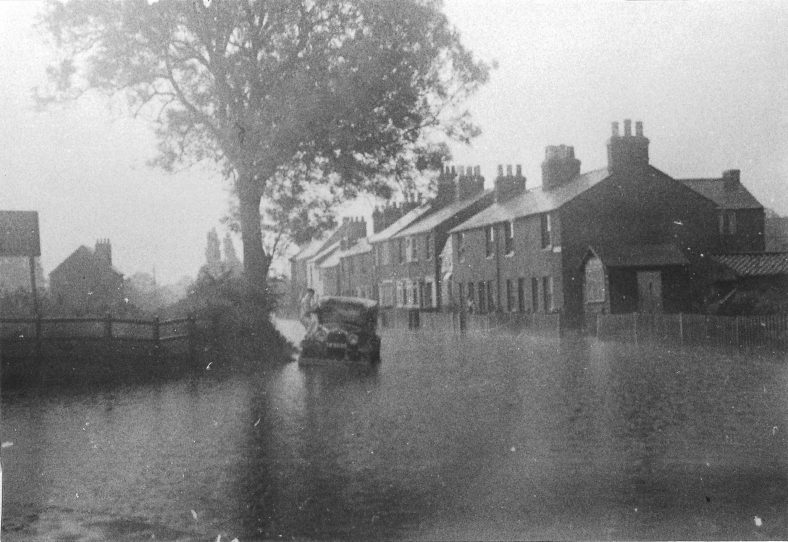 On the North side of the High Street, the business premises of Ellen Milne, ladies’ hairdresser, were flooded from above, the rain, for some reason, failing to get away and soaking through to the bottom floor, damaging ceilings and woodwork. Business, however, was carried on as usual on the following day.

The gardens on the east side of Luton Road were under water, and at Pimlico, West Common, the home of Mr and Mrs H F Johnson, which was originally the “Cricketers” public house, was flooded to a depth of two to three feet with the rush of water which swept down from the Rothamsted allotments, and was thrown back by a wall bordering the end of the block of dwellings on this spot. Furniture was soon floating in the rooms and coal from the coal bins in the vicinity was carried by the water down as far as the “Silver Cup”.

An eight-foot wall, bordering “Lane End”, the residence of Sir Richard and Lady Lodge, was brought down for a distance of between 50 feet and 60 feet by the force of water which flowed across the garden and fell into Townsend Lane, leaving part of the garden, and the end of the tool shed, to form the edge of a “precipice” over the lane.

Although the lightning did little damage in Harpenden, it struck the aerial and wrecked the wireless set of Mr and Mrs H G Pearce of “Hill View”, Top Street Way. So loud was the report which accompanied the incident that a neighbour called to see what had happened. Mr and Mrs Pearce, with their baby, were in another room at the time.

Lightning also ripped a number of tiles from the roof of a house in Highfield Avenue, and felled a tree in Rothamsted Park. Another tree was brought down by the force of the wind in Upper Crabtree Lane, which for a time was impassable as a result.

Employees of Harpenden Urban District Council worked feverishly on Sunday night collecting the chippings which had been spread on freshly tar-sprayed road, and which had been swept away into drifts which were a danger to traffic. The next day, portions of paths and roadway that had been torn away here and there were replaced.

The Harpenden L M and S Railway Station was unaffected beyond the stoppage on the St Albans section of the line, which included Ayres End Lane bridge. Batford appeared to be in no way inconvenienced, as although there is normally some flooding of the meadows bordering the river, this was able to carry the surplus of water on Sunday.

Upwards of forty telephone lines in the Harpenden district were disordered by electrical disturbance, but the bulk of them were restored on Monday.