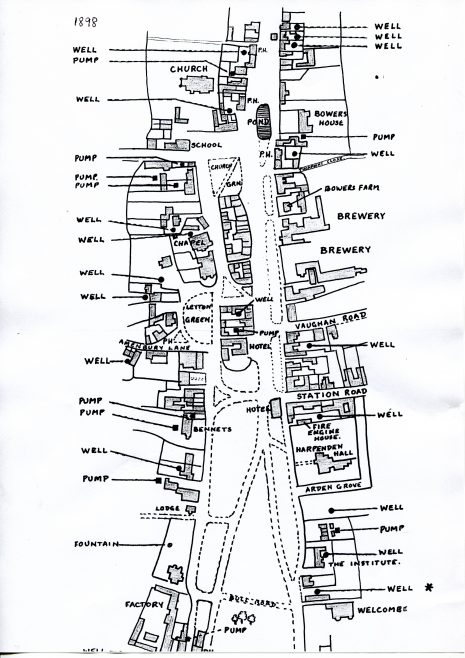 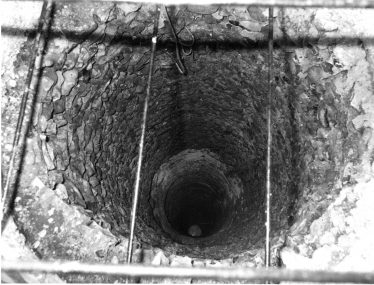 Until 1885, all Harpenden’s water came from wells. The Ordnance Survey map of 1898 shows the locations of many of the pumps and wells which provided the residents with water, and there was also a role for water carts. 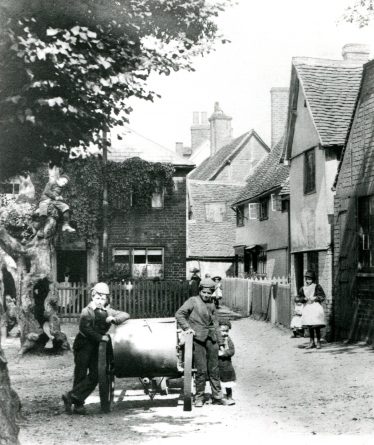 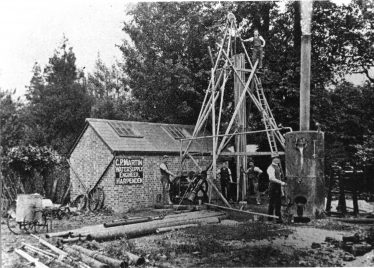 The well-borer Mr C P Martin remained in business until 1915. Some wells survived to be photographed … for instance at The Dene, 15A Southdown Road. Generally wells were operated by hand pumps, but the well at Annables Farm was operated by a.donkey. The well-head gear at upper Topstreet Farm (The Granary farm) in Crabtree Lane was substantial. It was moved to the Chiltern Open Air Museum in the 1970s when the site was prepared for the development of Gilpin Green. 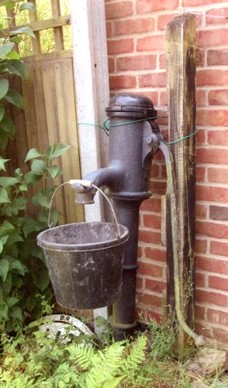 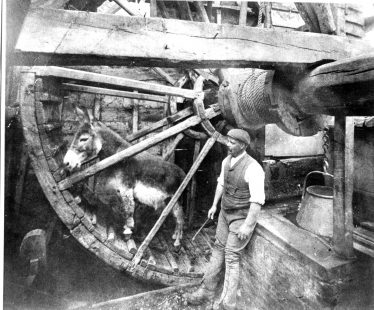 In 1885 a private company was formed to supply water to the new Park View Estate (Milton, Shakespeare, Spenser and Cowper Roads). The 1898 map shows the reservoir and water tower of the Harpenden Water Company in Shakespeare Road. Its first office was in the home of Mr C J Williams of 5 Milton Road. He moved the office to the premises of his coal merchant business in Station Approach, until c.1930 when the office moved to 33 High Street/29a High Street. 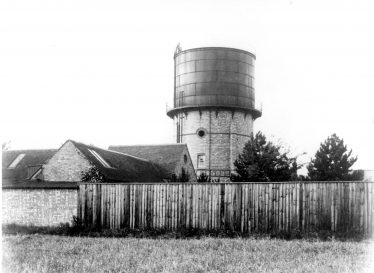 The first tower dates from 1890, and stored 75,000 gallons of drinking water. However by this time the company was in financial difficulties, as demand for piped water had grown quickly. It was offered to Harpenden Parish Council in 1889 for £5000, but the offer was not taken up. Soon after Harpenden Urban District Council was formed in 1894, the Water Company again offered the company to the Council, this time for £13,550 (later reduced to £12,000), but still the Council refused to take it on, bowing to resistance to higher rates being charged. While one farmer, Mr Hitchcock, said he ‘would not object to a 1½ d (half a penny) rate for five years in order that the Parish would have control of its own water works’, another farmer, Mr Sibley, objected to farmers paying rates for benefits they did not get (as they had their own water supplies) and he made it clear that he would not pay.

In the event, Harpenden Water Company remained independent until it was taken over by the Colne Valley Water Company in 1960. Ownership of the company has changed name three times. In 1994 it became part of the Three Valleys Water Company and in 2010 it became Veolia, renamed Affinity Water in 2012. What is not disclosed is who actually owns the company since water was privatised in 1989. 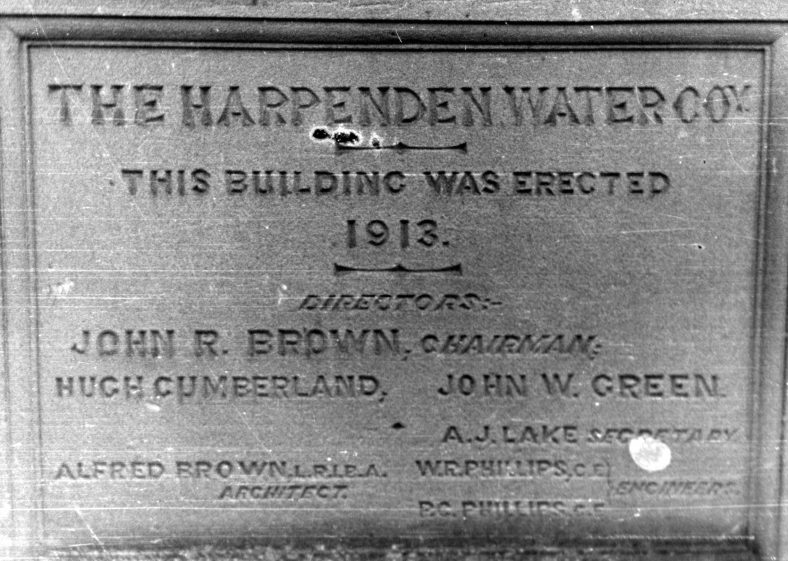 In  the absence of surviving records (there are none in the National Archives), we can guess that the second water tower and pumping station were erected in 1913 – according to the foundation stone on the pumping house building. 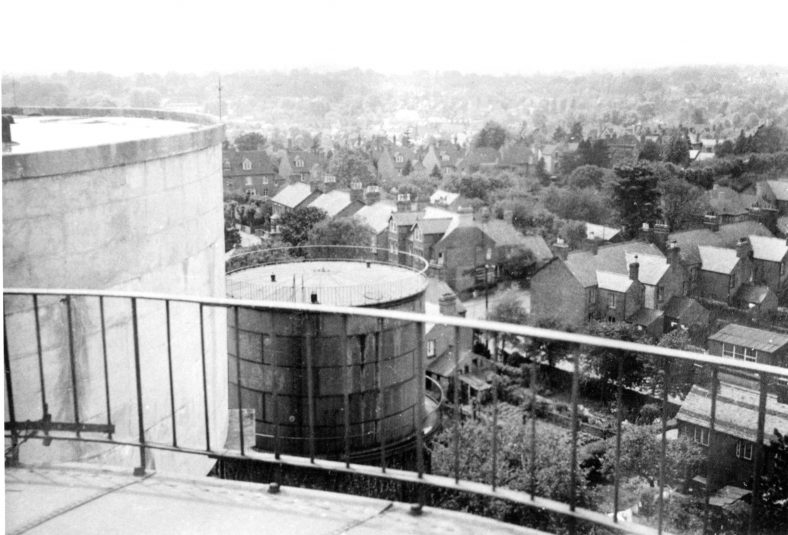 The first and third towers, viewed from the top of the second tower in 1932, – corrected in the light of the Comment below. Credit: LHS archives – copy of photo by F. Skeat -LHS 12176

With the expansion of Harpenden in the 1930s, a third water tower was built, and for a while there were three towers on the site – as evidenced from photographs taken in around 1932 from the top of the newly built tower with reinforced steelwork.  It would appear that this was also the time when the Harpenden Water Company pumping station was built just south of Hyde Mill, drawing water from a deep bore hole near the River Lea. 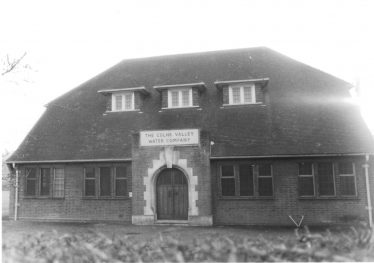 The company was evidently proud of the new tower, and published a photograph and summary of the specifications on stiff card, presumably as a promotional exercise to reassure the public of the engineering skills involved. 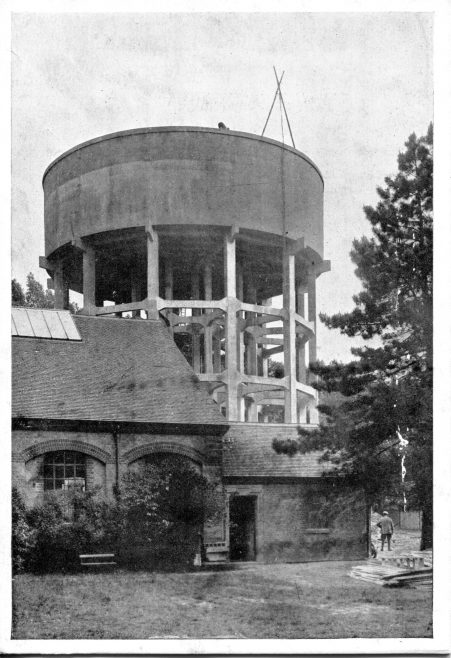 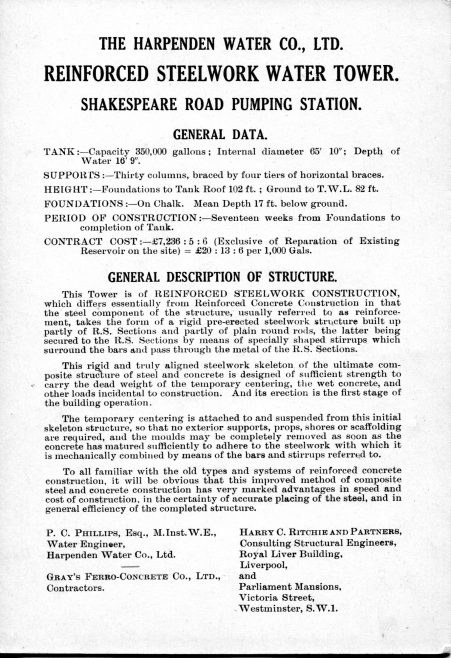 Specifications for the new tower on the promotional card. Credit: LHS archives

During the second world war air raid sirens were situated at Abbott and Anderson’s factory, near the Silver Cup in Leyton Road, at Harris Builders at 100 Luton Road, and on the old water tower in Shakespeare Road – as recalled in various memoirs about the war. 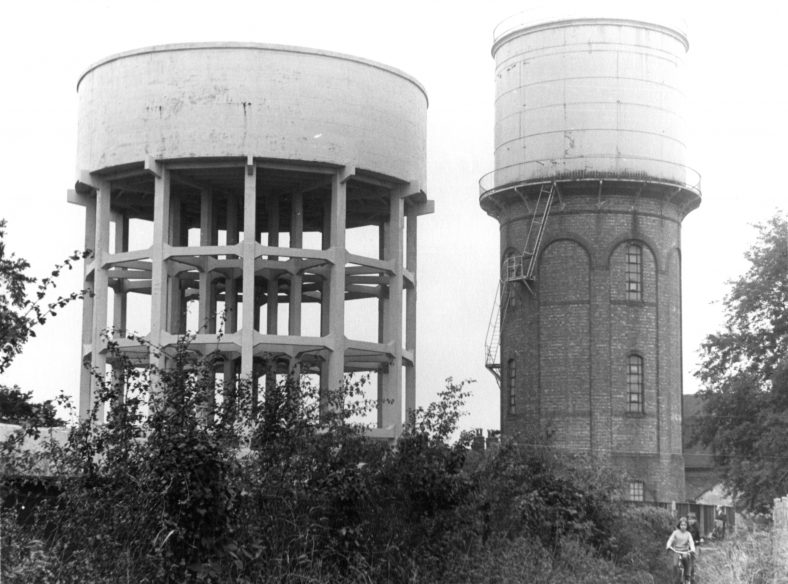 The second tower was demolished in the late 1960s by D V Baulk.

During the 1960s a new or enlarged reservoir was dug alongside Granary Lane. 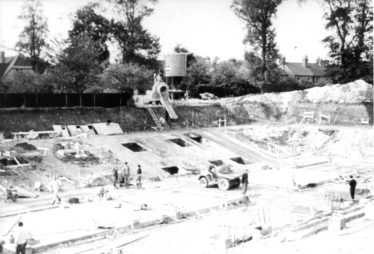 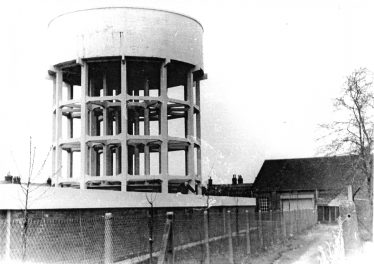 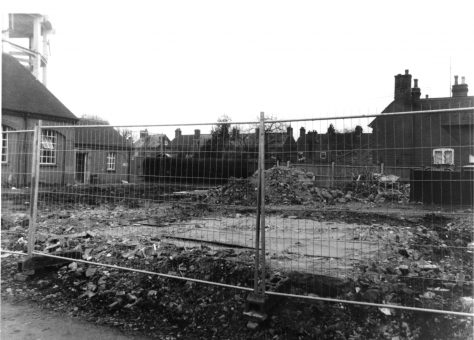 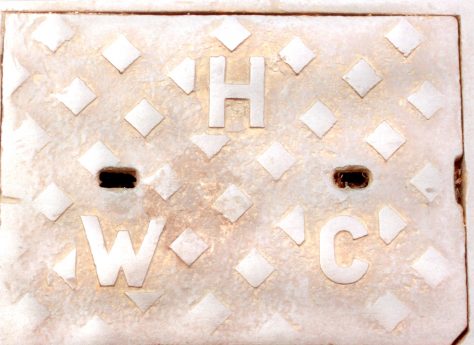 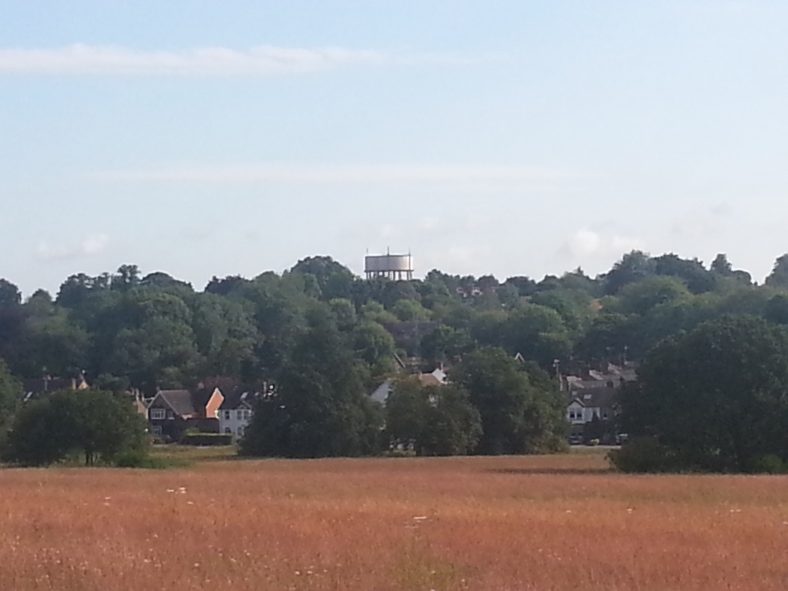 With the advent of mobile phones, antennae were attached to the top of the tower. In May 2014 a planning application was submitted to St Albans District Council for the erection of a slender 20m galvanised steel tower specifically for antennae – “New Concrete Base And 20M Dual Use Lattice Tower With Six Antennas On Pole Mounts And Yolk Arms And Ancillary Cable Trays Mounted On Poles”.

Despite many local objectors, planning permission was granted, on appeal, at the end of December 2014.  From the documentation it is apparent that Affinity Water had already planned demolition of the Water Tower which had not been in use for some time. The water works are not within the Conservation Area, and the Tower was not listed.

In January 2016, to the dismay of those who had not heard of the planning application and erection of the new mast, demolition of the Water Tower began and was photographed by many local people – there is a selection of photos recording the demolition between 27 January and 3 March 2016 in the gallery published on a linked page. The loss of a landmark has been much lamented through social media.