Anscombes of Harpenden - Past and Present

A short history published by Stephen Egarr in 1982 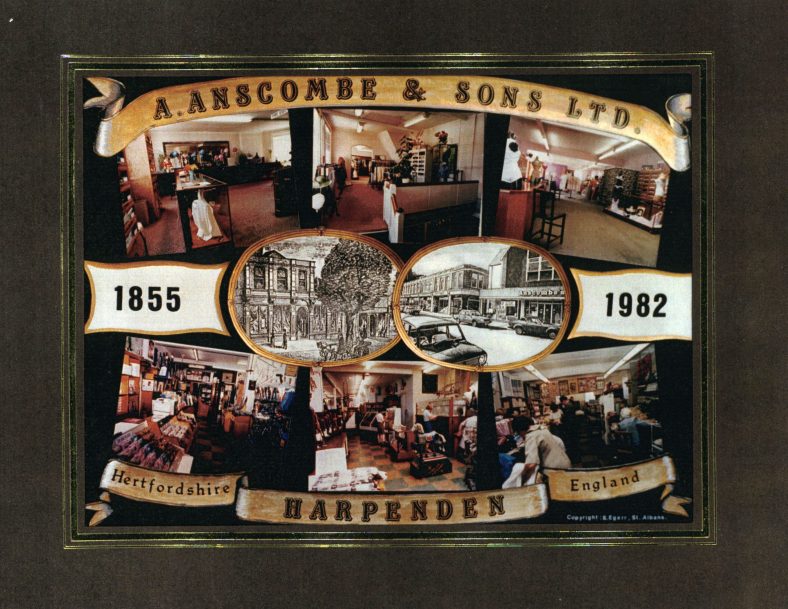 Allen Anscombe was born on 30th October 1824 and died on 10th July 1903. In his lifetime, he created and built up a business which was to become something of an institution in Harpenden, ‘Allen Anscombe & Sons’ – but more generally known as ‘Anscombes Department Store’.

It was around 1848 when Allen Anscombe began selling groceries and drapery in the front room of his Georgian house in Leyton Green. At this time, Harpenden had a total population of around 2000.

Even with such a modest size of populace on which to draw his custom, the business flourished.  Shop premises were built on to the front of the house and in 1855 the firm of ‘Allen Anscombe & Sons, Drapers, Hosiers, Haberdashers, Grocery and General Stores’ became established.

The business continued to flourish and between 1870 and 1890, a stylish and elegant extension was added, designed by Allen Anscombe’s architect son, Ernest.  The new premises transformed the establishment into Harpenden’s own Department Store, very much in the style of London’s West End stores of that period.

This was quite a boast for what was really little more than a large village with a population, even at that time, of less than 5000.

The range of merchandise was extended to include fabrics and furnishings and a feature of the enlarged premises was the installation of a Lamson Rapid Wire Overhead Transport System.

The system comprises an arrangement of overhead wires radiating out from the cash desk to each sales counter on the ground floor, along which metal carriers with detachable wooden cups are catapulted.  In those times, there would have been an almost constant sound of humming and swishing as the wooden cups containing customers’ cash and bills of sale sped their way to the cashier.  A succession of metallic clunks signalled the arrival of the cups at their destinations, soon to be singing back along the wires complete with change and receipt.

This part of the store, complete with the overhead wire system, has remained virtually unchanged to the present day (1982) and has become well known throughout Hertfordshire.

The Grocery Department was still active in 1906 but was later closed down.  This may have been around 1926 when Mr ‘Algy’ Pamphilon was appointed Managing Director of what had now become a limited company.  From that time, the running of the store passed into the hands of the Pamphilon family, where it has remained.

‘Algy’ Pamphilon was quite a character, an astute businessman and a keen buyer.  In the war years 1939 – 1945 and for a few years afterwards when fabrics were in short supply and clothing was rationed, Algy bought whatever Government Surplus materials he could lay his hands on.

Pure silk parachutes were dyed and made into ladies’ underwear, blouses, headscarves and cushion covers.  Surplus Barrage Balloons were cut into large pieces to be sold as waterproof car covers and roofing for garden sheds.

He once created what was probably the longest queue of customers ever seen in Hertfordshire when he advertised the sale of net curtain material at a time when it was virtually unobtainable elsewhere.  He had managed to buy half a shipload of fine net which, after impregnation with an adhesive, was originally intended for use on windows as an anti shatter device in case of bomb blast.

As the war years receded, trading and supplies began to return to normal and Anscombes once more resumed the style of business for which they had become known in pre-war days.

In 1963, when the Harpenden population had reached about 19000, the premises were extended yet again by the acquisition of the disused Regent Cinema, next door, formerly a Wesleyan Chapel.  A minor change of the frontage and this property became Anscombe’s Furniture Department.

The more modern frontage of this latest addition is in direct contrast to the style of the main Emporium, which is noted for having retained its old-world charm and high standard of personal service through to the 80’s.  So little of the interior has been changed over the years that stepping through the doorway is like crossing the threshold of time, back to the days when ladies wore feathered hats, lace chokers and hobble skirts and gentlemen in Brown Derby hats were a familiar sight.

Alas, this living reminder of the peaceful and leisurely atmosphere of the past is to be denied to the future generations of shoppers.  Having withstood the competition from multiple self-service stores for so long and outlived other department stores of its kind by many years, Anscombe’s of Harpenden is to close down.

The end of an era

In October 1981, chairman and managing director Mr Bryan Pamphilon and his brother Dennis, announced the forthcoming closure, expected to be sometime in 1982 after clearance of spring stocks which the store was already committed to accept from suppliers.

The burden of Value Added Tax and the pace of modern living are claimed to be the main reason for the drastic downturn of trade in the store. ‘People don’t seem to appreciate good service any more’ was the woeful comment of Mr Dennis Pamphilon.

This special pictorial record has therefore been prepared for those who wish to have a permanent reminder of what may be the last store of its kind in England so that 135 years of our shopping history shall not be forgotten.