Frontage to Leyton Road, showing how the shop occupied the ground and first floors of the east side of Wellington House

Although I was born at Wellington House in 1905, my family moved to Mill Hill when I was six years old, and when we returned to Harpenden in 1916 it was to a house in Longcroft Avenue.  My eldest brother Percival had in the meantime moved into the old house and my visits to it as a schoolboy at St George’s were rather limited.

The business of Anscombes in those days was rather like that described by H G Wells in his novel because some of the ‘assistants’ were ‘living in’ and there was a fairly rigid demarcation between the family part of the establishment and the business side, although I remember visiting the ‘assistants’ dining room (part of the shop demolished in 1984).

How Wellington House became part of the shop

I never discovered the small back staircase which led up to the large top floor where there were several more bedrooms, although I have strong recollections of being on the roof very early in the morning to see the aeroplanes fly over during the first Round-Britain Air Race in 1910.  It was only when I was shown round the house in April 1984 that I realised what a large house it must have been before my grandfather (or possibly his father because the eldest son was christened Allen for several generations) had started spoiling it by turning half the ground floor and first floor into shop areas.  This change began around 1848 when my grandfather (1824-1903) was only 24 years old.

The Inland Revenue statement made at his death in 1903 valued the Wellington House premises at £3700, the adjacent ‘Hazelbank’ and cottage (to the rear, demolished and now part of Waitrose carpark) at £2200.

As a six year old I was occasionally allowed to enter the cashier’s office at the noisy receiving end of the ‘elastic-gun ‘ operated cash railway system, which lasted so many years.  I tried my hand and my arithmetic at unscrewing the little cash containers and calculating the change (under supervision) but was once briefly left alone to cope with the excitement of dealing with one while another one or two came banging in!

My favourite bill was ‘one and eleven three’.  Another interest to a child in those days was in the stable area, where two or more horses and delivery vans were kept before the days of motor vans” 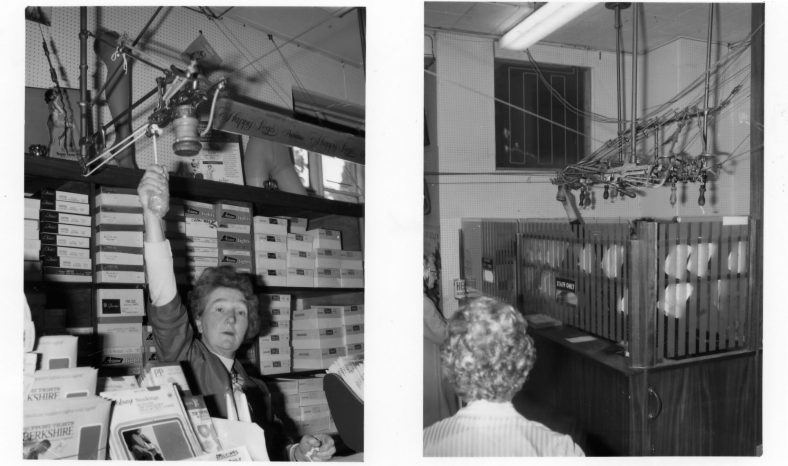