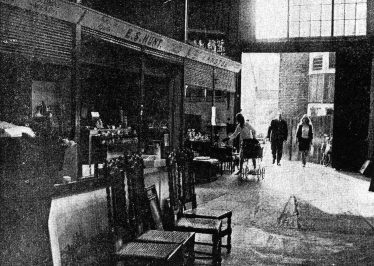 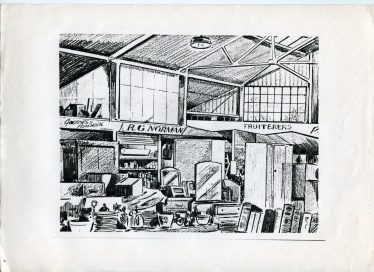 Broadway Hall Market was located on the area presently occupied by Sainsburys and the Santander Bank.

Looking back to the turn of the 20th century, there was a house called Bowers Cottage fronting on to the High Street.  This was owned by Henry Mardall of the family who owned the nearby brewery, and was sold to the Roman Catholic Church so that the Dominican Sisters could open a girls’ school.  It opened on 4th May 1920 but by 1923 was already too small, and closed at Christmas.

In that year they purchased larger premises at Harpenden Hall before moving again in 1931 to the “The Welcome”.  Bowers Cottage was then bought by a local builder, Jesse Catton (Broadway Properties) and it was demolished in 1924.

A row of shops, known as Broadway Parade, was built facing the High Street and the first occupant moved in during June 1926.  The first shops were a Tailor, Tea Room, Costumier and Greengrocer. Behind the parade of shops, the former garden was unused and it was on this that a large hall, steel framed and clad with asbestos, was built with the specific use as an indoor market.

It was opened on 15th April 1933 with sixteen shop units, dealing in a variety of commodities, the shops being round the outside of the building, leaving the central area clear.

This area was to be of great use in May 1935 when a large tea party was held for local schoolchildren at the time of the Jubilee of King George V.  By October 1939, two shop units were empty and Mr Catton gave them for use as a Sunday Canteen where parents visiting their evacuated children could go for tea, rather than expect the host family to provide it.

The shops were closed in 1940 and the hall was taken over by the War Department (Army) from 30 September 1940 for the storage of catering equipment.  The Army stayed until 19th January 1945 and it was then handed over to the YMCA from 1st March 1945 for storage of their equipment.

They remained until 1953 when the Manager, Mr Duckworth said they would be moving out on 29th September and the hall was handed back to Broadway Properties who intended it to revert to a market hall.

The Chamber of Commerce was against the opening of more shops, considering Harpenden was already well catered for, and that the hall could be put to better use.

One idea put forward was for an indoor swimming pool and that the lads of Harpenden could dig it out rather than hang around in the High Street.

However, the editor of the Free Press newspaper soon made it clear that he would like to see more shops which could only benefit the area.

The end came in 1967 with all the shops closed by the end of March.

The Hall was demolished in January 1968 and the parade of shops in front of it followed soon after.