Shopping in Harpenden over a century ago. 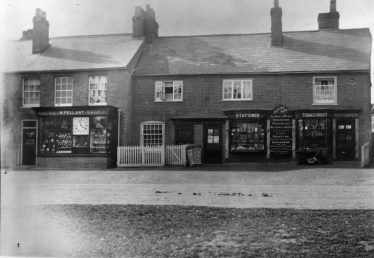 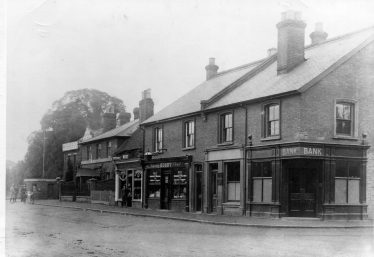 In the 1880’s and 90’s the centre of Harpenden really was a village.  Lower High Street, with its brewery and smithy had several houses, at least three inns and many cottages, in one of which Mr Eyles carried on his tailor’s business, and in another, near Bowers House, Mr Saunders sold sausages.  Probably the only proper shop was that of Mr Oliver Jewers, the drapery and boot shop.

Irons, the Bakers, was in the High Street, where customers stepped down to find themselves surrounded by bins of corn and meal, over which hung a parrot in a large cage.  Next door was the Chemist’s where Mr Busby, in a black scull cap acted as dentist to the village people.

The only sweet shop was Mrs Austin’s, who also sold toys and having a special low shelf for the penny ones.  Further along was Dudmesh, the saddler, where coachmen from the larger houses called in most days to exchange news.  The shopkeepers lived above their shops, or in some cases alongside them, and right up to the 1920’s the block from The White Lion to Church Green had some house fronts between the shops.

In a cottage in Station Road, then Stakers Lane, nursery porridge bowls for the Lydekker children were bought from Mrs Nott.  Mrs Fells the grandmother of the present greengrocer, sold fruit in a cottage near the Silver Cup.

Anscombes shop built on to the handsome Wellington House, was much smaller than it is now, and then sold boots and groceries in addition to material and haberdashery.  When the ladies from the big houses went there they were offered sherry and seed cake before they made their purchases.  As Harpenden grew, imposing shops were built; amongst them Miss Wrights hat shop (now Buntys) to which the County ladies came in their carriages.  Another was Ridleys (now the Midland Bank) which was a really high class ironmongers, with a department for china and glass.  In a yard around the corner, was the coppersmith, where pots and pans were mended, and where was kept the horse and cart with which Mr Wiseman delivered oil from shining brass cans.  Next to this was a wheelwrights.  There was another smaller ironmonger (where the Inn on the Green is now) in an extension in front of the little house where Frank Salisbury, the famous artist, and his many brothers and sisters were brought up.

Moving on to the 1920’s, it is interesting to note that at that time there were, I think, only four shops which were not privately owned, namely: Freeman Hardy and Willis; a very small International Stores; Smiths the cleaners; and Elliott’s Music Shop.  It is also interesting that there were then three tailors – Jones, Skillman and Friendship, in business here, and in addition to the one in Anscombes. There were numerous dressmakers who either worked in their homes or spent days working in the houses of their customers.  There were few ready made clothes to be bought.  There was also at least four boot-makers or cobblers shops.

Butchers including Steabben, Piggot and Dunkley, all had their own slaughter houses, and many of the shops had delivery carts which were every bit as smart as those we now see at Shows as Small Trade Turnouts.  Other shops, like Valentine,  the stationer, and Watson, the shoe shop, had errand boys who rode around on bicycles fitted with large baskets.  The two high class grocers, Wilmotts and Simons, sent men to all the bigger houses for their orders, and practically all their goods were sold loose and had to be weighed out for each customer.  One establishment, it can hardly be called a shop had a delivery woman, and that was Thurston, the photographer, the window of whose wooden premises in the High Street was a point of interest to see the latest photographs of local wedding groups and personalities, including portraits of the Royal Family and the Bishop of St Albans.

Another interesting window was that of Pellant, Clockmaker and Jeweller, where we liked to linger to admire the trays of rings and brooches.  Mr Pellant went each week to all the bigger houses of the district to wind the clocks.  Mrs Pellant, who had a figure like that of the elderly Queen Victoria, adorned her fingers and the bosom of her long black dress with, we believed, a selection from the stock of the shop.

At that time, the outlying parts of Harpenden were well supplied with little corner or general shops, which were meeting places for the cottage women in their curlers and men’s cloth caps.  Whether one went to the bigger shops or the little corner shops, one always had personal service, and time to talk to the shopkeepers or to friends and acquaintances, though there was not perhaps as much hygiene as there is today.

By Cornelia Clutterbuck May 1980 (from Eric Brandreth's collection)