Tracking down the Toll Gates or Bars between Harpenden and Luton

This article was first published in Newsletter 122, April 2014.

The Society was recently asked if anything was known about a toll gate in the vicinity of Kinsbourne Green. After some research it became apparent that there were two toll gates or bars in the area.

The road from St Albans to Luton and beyond via Harpenden (the modern A1081, formerly the A6) was maintained by the Bedford and Luton Turnpike Trust, which was funded by tolls charged at Fielden Gate near Silsoe, Barton Gate near Barton-le-Clay, Gibraltar Bar and Harpenden. 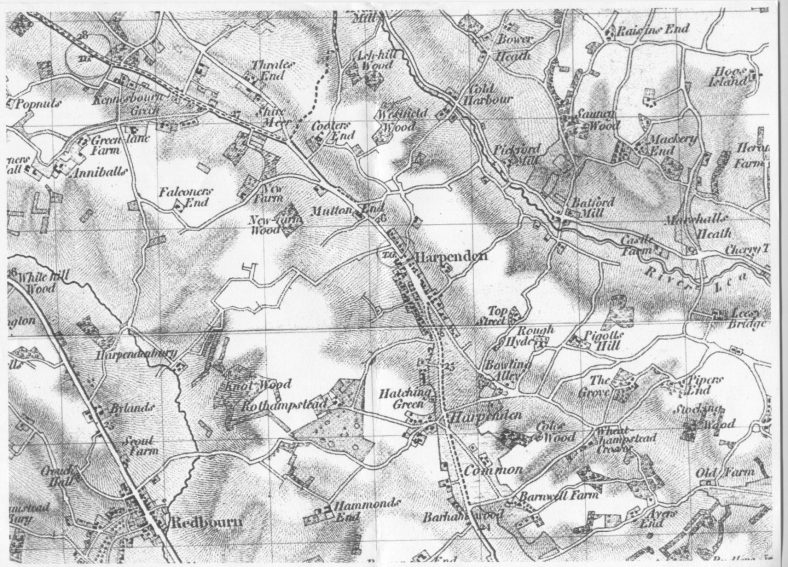 The Ordnance Survey 1” map of 1834 has the symbol TG (toll gate) on the Luton Road a short distance north of Kinsbourne Green and the Harpenden Tithe Award map of 1842 shows what is evidently a toll bar with a very small building in the same location. As this toll lies about half a mile south of Gibraltar Farm and all the available maps show toll gates only at the other locations named, I am quite sure that this is Gibraltar Bar. The above map is the earliest dated reference to Gibraltar Bar and there are few other references before the Turnpike Trusts were abolished in the late 1870’s. 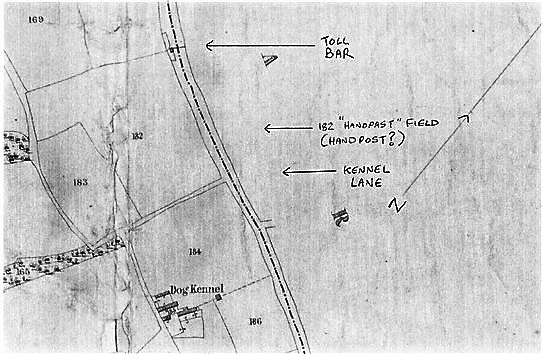 This extract from 1842 Tithe Award map shows the tollgate and house north of Kinsbourne GreenIn 1835 a Mr Chaplin, Miller, was accused of passing through Gibraltar Bar without paying the toll by Mr J Norman, tollkeeper. At Luton Petty Sessions on 8 September of that year Chaplin was fined £2 plus costs and a witness who supported Chaplin was to be indicted for perjury. (Huntingdon, Bedford & Peterborough Gazette, 10 October 1835, page 3)

As Gibraltar Bar and the Harpenden Gate are only 2 miles apart were tolls payable at both? It seems possible and this situation would also apply to the other two tolls, which are only a few miles apart. There were at most four tolls on a turnpike that ran from Bedford to St Albans.

There is a possible explanation for the addition of Gibraltar Bar which brings us to another toll gate in the vicinity of Kinsbourne Green:

The stretch of Watling Street (A5) between Dunstable and St Albans was maintained by the Dunstable and Pondyards Turnpike Trust. Pondyards was the name of a series of ponds fed from the River Ver close to the road bridge (Bow Bridge) over the Ver. This is near the lane to Shaffords Farm and was the southern end of the Turnpike.

This Trust seems to have had only two tolls along its entire length, located near Dunstable and at Fly’s Wash – no map consulted shows any toll gate or bar to the south of Fly’s Wash.

Amongst the few surviving records of this Trust held at HALS (TP2 -Dunstable and Pondyards Trust) is a reference to a ‘side gate’ that was opened in 1847 on ‘Rose Lane’. This lane was described as ‘running from Redbourne to Luton’.

The only route that fits this description is the modern Luton Lane/Kinsbourne Green Lane which leaves Watling Street at Bylands and meets the Luton Road at Kinsbourne Green.

If a toll gate was erected somewhere along this route it must have been set up to catch those who moved between Luton and St Albans via Watling Street, where there was no toll up to Redbourn, and then using ‘Rose Lane’ to get to the Luton Road without passing through Harpenden and its toll.

Gibraltar Bar and this ‘Rose Lane’ toll cannot have been one and the same as they were operated by different Trusts. However one moved between Luton and St Albans in the period from 1847 to the 1870’s one was apparently liable for two toll charges in the Kinsbourne Green area!

If anyone has any information about a ‘Rose Lane’ in the Redbourn / Kinsbourne Green area would they please get in touch!