You are here: HomenextHarpenden HistorynextTopics - from Archaeology to WartimenextTransportnextTransport in and around Harpenden during the 1920s

Transport in and around Harpenden during the 1920s

This was the contribution by Mr Wood of 7 Westfield Road to a competition for memories of Harpenden before 1930, organised by the Society in 1986 (archive ref.BF 20A 4F) 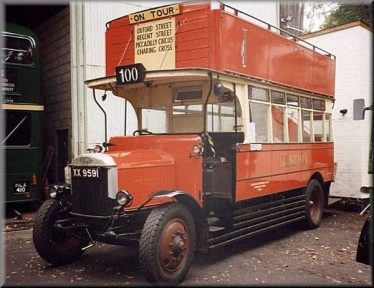 Dennis 4-ton (XX 9591) from 1925 with Dodson body. Credit: The Dennis Society – on display at the London Bus Museum at the Cobham Hall, Brooklands.

I was born in 1912 at Kingscroft Road and spent my boyhood living on East Common. I remember travelling on the solid-tyred open-top double deck buses. For a short period these buses included Cravells Road on the St Albans – Harpenden route and when nearing the Midland Railway Bridge the conductor would climb the stairs and shout “Heads down”. Anyone hard of hearing would have to rely on vision only. The “Dennis” buses had a row of seats with the driver. The “Palladiums” had an additional row behind him. The only protection from weather being a waterproof sheet strapped up at eye level. There were short delays as the conductor had to come to the front and collect fares, as once you moved off contact was lost with him. The main road to St Albans was narrow. A small portion can still be seen on the left when nearing “The Ancient Briton” from Harpenden [Old Harpenden Road, now blocked at the northern end]. Later the “Express” bus service owned by Mr Blowers of St Albans started. These were two “Sunbeam” buses, one small, and the other medium size. 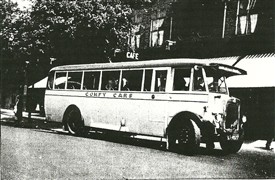 About the same time a Harpenden based firm called “Comfy Cars” started. These were “Lancia” buses and certainly lived up to their name. For comfort the leather upholstered seating would put many a present day bus to shame. 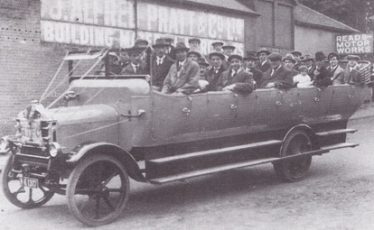 There were three charabancs in Harpenden: Oggelsby’s” The Little Grey”, Putterill’s “Rambler” and Saunders of Southdown’s “The Silver Queen”. Against these we had the horse drawn brakes of Rolt’s. These were in great demand for Sunday school treats and other outings. Under a by-law, each year on Good Friday Mr Rolt would put a barricade of horse carts across Heath Road, near Skew Bridge.

Links with the railways 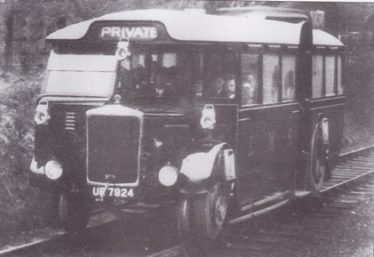 It was during the 20’s when the Midland Railway were experimenting with a new form of transport called a “Ro-Railer”. This was a bus that ran from Harpenden to Hemel Hempstead on the Nicky Line, and then continued its journey to Boxmoor by road.

There would be at least one horse cab at the Midland Station waiting for fares. We would run behind these cabs and squat on the rear axle. A shout of “whip behind” would bring the thong swishing round to the rear of the cab. 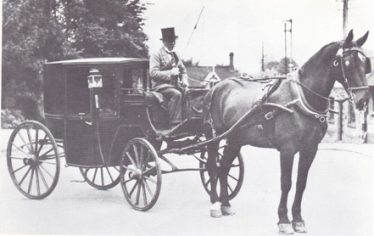 A Mr Hogg who had the nickname of “Long Oats” was a special target for this practice. Two greengrocers, both from Luton, with horse drawn carts would sometimes clash in Cravells Road. There was never a fight, but the volleys of verbal abuse they fired at each other would turn the air blue at times.

There were a number of belt driven motorcycles. Sometimes you would see a chap at the roadside woefully gazing at what had been his driving force, a broken rubber belt.

Motors were gradually taking over from horses. The Ford van appeared to be popular with local traders. There were also smaller vans called “Trojans”. These were started by the driver pulling a lever on his right side. They had narrow wheels with solid tyres and always appeared to slide a little when turning corners.

Tricycles were popular. Some traders had box-trikes and there were quite a few privately owned. One very well-known character, Mr Jackson, would dismount his trike and chase any youngster who called him a certain name (I must confess that I knew it). I remember the motorised three wheelers of the bakers West and Rowe. The privately owned “Morgan” three wheelers were also popular at that time.

There were a few “Foden” steam waggons running in the 20’s. One seen in South Harpenden a lot was “Kingham’s Wholesale Grocers’ of Watford”. Speaking of steam, we must remember those mighty traction engines each proudly displaying its name of some monarch or nobleman, bringing the Fair to Harpenden at “Statty Time”. There was only room for two engines at The Silver Cup. The remainder parked at the top of Walkers Road and Cravells Road where at that time there was a large triangle of parking space. Six to eight engine loads was considered a good “Statty”. Nothing was allowed on the fairground until 8 a.m. on Monday. At the sound of Abbotts’ hooter the engines started to move. At the same time many local people would adjust their clocks and watches. That hooter was almost as accurate as the radio pips of the present day. The “Statty” was open for one day only – Tuesday – and I used to love gazing at these monster engines rocking gently back and forth as they worked the dynamos to provide power and light for the various rides. Lots of side shows and spit rock stalls (see comment) used naphtha flares for lighting. 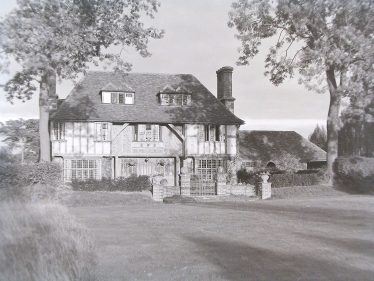 We would be playing on East Common when suddenly a low flying aircraft would appear. Up would go the cry “Watch out! Here comes Donald Green”. He would land on the golf course fairway opposite “The Grange” and with a little help, push the plane along Limbrick Road and park at “Grey Gates” the family residence. A large group of youngsters would wait by the paddock for him to re-appear later, to take off again. Mr Green was often spotted flying low over The Common, performing various stunts.

To us youngsters the word “bored” had no meaning.