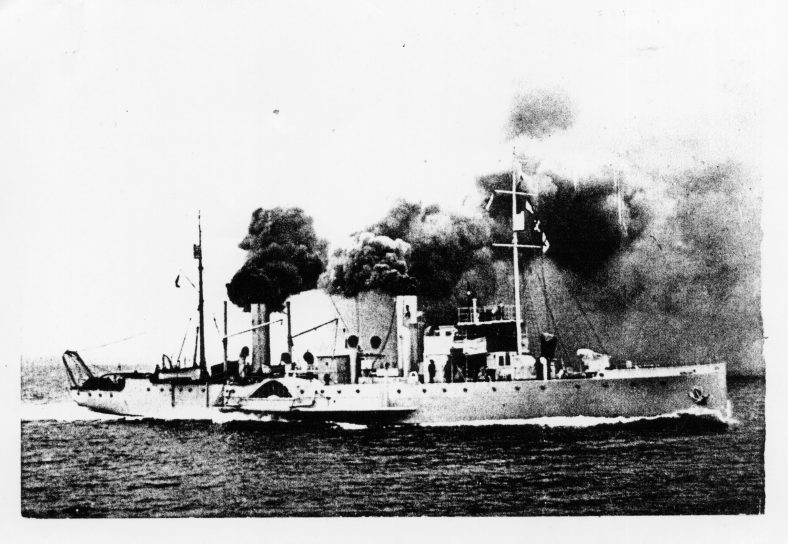 In the early days of the First World War the Royal Navy requisitioned many of the paddle boat pleasure steamers (there were a lot of them at that time) and used them in a variety of ways.  They were found to be particularly suitable as minesweepers; the manoeuvrability afforded by paddles, together with their shallow draught made them ideal for the job.

The Admiralty commissioned a fleet of 32 to be built, all named after racecourses, and known as the ‘Ascot’ class.  The first 24 810 ton coal-fired steamers were built and commissioned between January and October 1916 to a design by the Ailsa Ship Building Company.  As a class they were fairly good sea boats, but prone to lose speed through the paddle boxes getting choked with water.

Between January and June 1918 a further group of eight 820 ton ships were completed to an improved Admiralty design, adapted from the Ailsa Ship Building Company one and known as the Improved Racecourse type.  However they suffered from thesame defects as the earlier group.  The fifth to be completed in February 1918 was HMS Harpenden.  There had been a one day race meeting on Harpenden Common in May every year between 1848 and 1914.

In January 1919 the Harpenden was berthed at Harwich for disposal, and was sold for scrapping in April 1928.  In 1930 the ship’s bell was presented by the Rt Hon J C C Davidson C.H. C.B. M.P. to Harpenden Public Library where it still hangs.